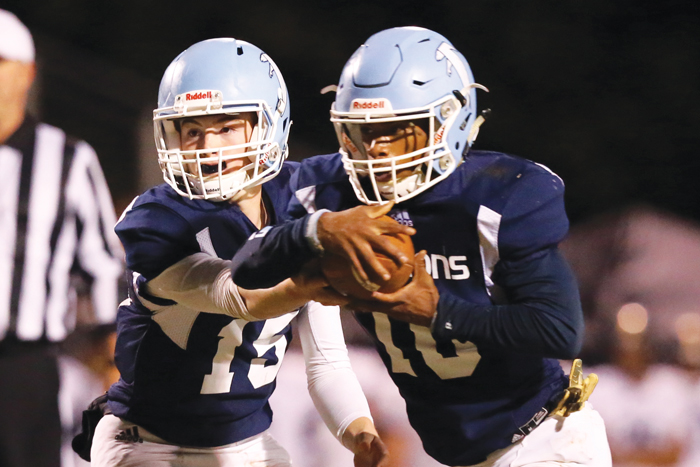 James Sipes file photo/for the Salisbury Post ... West Rowan quarterback Noah Loeblein (15) hands off to runner Jalen Houston (10), during a game against South Iredell on Oct. 18. The Falcons travel to Morganton Freedom for tonight’s first round game in the state 3A playoffs.

In other games that same night in the old Western North Carolina High School Activities Association, Concord shut down Lexington, 8-0, to take the South Piedmont Conference title, as the mighty Spiders stayed on a collision course with the unbeaten Mustangs. In the foothills, Shelby crushed Chase, 49-19, at Gardner-Webb, to win the Southwestern Conference championship game, while Hudson upset unbeaten Lenoir, 20-18, in a battle of Caldwell County schools to take the Northwestern Conference.

Grandchildren of those Hudson and Lenoir players now attend South Caldwell, West Caldwell and Hibriten high schools, a reminder of how quickly time moves on.

While the WNCHSAA faded from the scene in 1977, its entire membership, which included the five Rowan high schools, Davie and A.L. Brown, joined the rest of the state in the NCHSAA.

The legacy of the WNCHSAA remains.

As the NCHSAA playoffs begin tonight, a couple of the old WNCHSAA schools — neighbors Crest (3A West) and Shelby (2AA West) — are No. 1 seeds in their brackets.

Morganton was a WNCHSAA member in 1969, and Morganton’s Freedom High opened in 1973. The town is named for Daniel Morgan, the hero of the American Revolutionary War battle fought at Cowpens, S.C., about 60 miles south of Morganton.

Not surprisingly, Freedom’s colors are red, white and blue, and they are known as the Patriots.

Tonight, the Patriots, who have a 10,000-seat stadium, host West Rowan in what is expected to be the game of the night in the 3A West bracket, an 8 vs. 9 matchup of 7-4 teams, with the winner advancing (probably) to a meeting with Crest in the second round.

The picks will continue into the playoffs, and we plan to expand them next week to include all the CCC, SPC, NPC, YVC and CPC teams that are still alive. Scott Maddox was 6-0 last week, correctly forecasting that Davie, a 14-point underdog, would outscore Reagan. I was 5-1, with Davie, as is often the case, providing the miss. Marny Hendrick was 4-2, missing on Davie as well as West Rowan-Statesville. Marny’s West over Statesville pick was not insane. The Falcons were up 21-7 and certainly had their chances. For the season, I’m at 51-15, with Scott surging at 50-16, and Marny at 46-20.

There’s not much difference in the panel’s picks tonight. We all tend to hope for the best for the local teams, and they’re all favored. The one exception is Scott’s bold pick of 27-point underdog T.C. Roberson over A.L. Brown. Well, the Rams are at home. Or maybe he’s a Cameron Maybin fan. The well-traveled MLB outfielder played for TC Roberson 15 years ago. If you’re wondering, and I often have because the Rams contend for state titles in a lot of sports, the school was named for Buncombe County educator Thomas Crawford Roberson.

If you’re heading to a game tonight, be prepared to pay $8. That ticket cost is set by the NCHSAA.

Quite a few teams in the East played Thursday, anticipating ugly weather on Friday.

Who beat them, is something I always look at first once we get to the playoffs.

West was runner-up to Statesville in the North Piedmont Conference.

Freedom  finished in a three-way tie for second in the split Northwestern 3A/4A Conference after beating Alexander Central and losing to Hickory, but Freedom won the draw between those three teams to get the No. 2 3A playoff seed from the conference.

Freedom’s early loss to Shelby wasn’t close, but Freedom’s loss to Crest was 51-48.

Freedom has grown accustomed to weekly shootouts and would relish a 49-42 game. West has a much more conservative approach and would prefer a game in the 20s. West beat explosive Davie, 24-21. That’s the sort of game West wants.

West coach Joe Nixon has a special offensive player in running back Jalen Houston, who is quick and elusive, but the Falcons’ strength lies with their tenacious linemen. West wants to pound and grind and mash.

Freedom wants to score quick. The Patriots’ strength is their skill people.

Freedom is a spread team and throws the ball extremely well. QB Jayden Birchfield, who will play at Navy, has thrown for 1,986 yards and 22 TDs, with only three interceptions. He’s also run for 610 yards. Desmond Caldwell (45 catches, 863 yards, 9 TDs) headlines the receiving corps, along with Day-Day Burgess (34 catches, 5 TDs) and Damien Dula (44 catches, 8 TDs).

It probably comes down to who gets their way as far as style and pace.

A lot of the Patriots play both ways, so that should be an advantage for West in the fourth quarter. The Massey Ratings system gives West a 4-point edge.

Luke Little coaches Freedom. He was head coach at South Stanly and Whiteville before being hired at Freedom.

Fans who go back a few years will remember Little, the son of long-time high school coach Mark Little, as a West Stanly linebacker and baseball slugger.

West beat Freedom in the state playoffs in 2009, on the way to a state championship, and also handled the Patriots in the 2016 playoffs.

WSAT will broadcast the action.

Mount Pleasant is only 65th in the 2A MaxPreps adjusted rankings. The Tigers probably would not have made the playoffs if they hadn’t upset West Stanly with a last-minute touchdown, followed by a decisive 2-point conversion, on the final night of the regular season.

That amazing victory lifted Mount Pleasant into a tie for second place with West Stanly in the five-team Rocky River Conference and gave MP an automatic playoff berth.

That’s why Mount Pleasant is seeded as strongly as it is. Even though the Tigers are 4-7, they received a conference runner-up seeding. They had to get a better seed than any of the at-large teams in their bracket.

Mount Pleasant has been outscored by 93 points this season (302-209). Salisbury has allowed only 90 points all season.

Mount Pleasant head coach Michael Johns, who has a masters degree in Business Education, has been at Mount Pleasant for two decades. He was an assistant at East Rowan prior to that. Johns’ teams have a reputation for being determined and sound.

Mount Pleasant quarterback Ryan Tyson is the son of Bryan Tyson, the long-time Cabarrus baseball coach who is now the AD for Cabarrus County schools.

Mount Pleasant runs for about 200 yards per game and throws for close to 100.  Salisbury, which has amazing defensive numbers, is about equally stingy against the run and pass. Salisbury’s defense should present problems for the Tigers because it’s presented problems for just about everyone.

Offensively, Salisbury prefers the ground and has a 1,000-yard rusher in Mike McLean, but QB Vance Honeycutt threw for a season-high 195 yards last week and threw for more than 1,000 this year, while playing in nine games.

Surprisingly, Salisbury is only a 10-point favorite. The Massey Ratings projected score is 20-10.

Back in 2005, Mount Pleasant surprised Salisbury, 19-14, in a first-round playoff game.

The schools also battled for four straight years when they were both in the Yadkin Valley Conference in the 1990s and won two apiece. Salisbury’s powerful 1995 squad mauled Mount Pleasant, 55-0.

Davie has been able to relax once all year (63-34 over R.J. Reynolds). As Davie reporter Brian Pitts pointed out this week, Davie could easily be 11-0 but could just as easily be 1-10. Except for the Reynolds game, every single game was decided in the fourth quarter or overtime.

Davie throws so well, runs so well and scores so much (35.5 points per game against a killer schedule) that is has a chance against anyone. Then again, Davie might lose in the first round. It’s hard to say.

Davie is expected to win tonight and is a 14-point favorite, but it may not be comfortable in that role. The War Eagles have embraced being underdogs.

Davie has never encountered the West Mecklenburg Hawks. Both squads made the playoffs as at-large teams. West Meck placed third in a Charlotte league that was ruled by Ardrey Kell and Olympic.

The winner moves on to play at No. 2 East Forsyth, which has a first-round bye.

Neither team lost to anyone who didn’t make the playoffs.

It does appear that the stronger team is traveling. A.L. Brown is 27th in the MaxPreps 3A adjusted rankings, while T.C. Roberson is 59th.

But A.L. Brown was seeded as an at-large team, while T.C. Roberson was an automatic qualifier as the third-place team in a nine-team league and had to receive a better seed than any at-large team.  T.C. Roberson actually tied for third place with Erwin, but the Rams nipped Erwin in their head-to-head meeting.

The Wonders go into the playoffs feeling confident. Jakhiry Bennett has run the ball well all year. Todd Kennedy Jr. has found the end zone frequently. The defense and special teams have produced an unusual amount of points.

Best of all, sophomore QB Cam Kromah is coming off, by far, his best game in the regular-season finale. Against Concord, he had four touchdown passes and no interceptions.

The Wonders and Rams played a classic in Kannapolis in 2005, with the Wonders taking a 39-38 victory on Jonathan Efird’s 2-point conversion pass to Jay Hosack in the second overtime.

Watauga, the No. 2 seed, is the likely opponent for the winner.