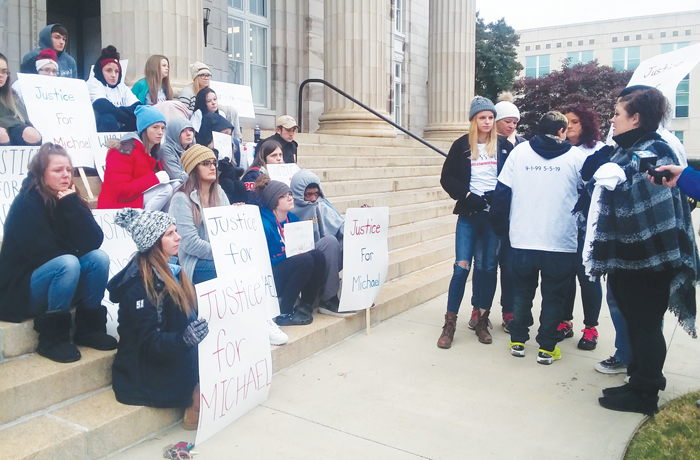 Family and friends of Michael Earley hold up signs to protest the Nov. 5 release of Madison Harrington, who was charged as an accessory in Earley's murder, at the Rowan County Courthouse on Thursday. Shavonne Walker/Salisbury Post

SALISBURY — Family and friends of 19-year-old Michael Earley, whose dismembered and burned body was found in May buried in a backyard, gathered Thursday to protest the release of a teenager charged in connection with the murder.

About 25 people assembled on the steps of the Rowan County Courthouse and later marched on the sidewalk chanting “justice for Michael.” The protest came a week after Madison Drew Harrington, also 19, was released on a $500,000 secured bond.

Harrington was charged with being an accessory to murder after the fact. In May, Rowan County Sheriff’s Office detectives said Harrington assisted in the dismemberment of Earley’s remains and concealing the crime.

Carlos Rosas Jr., 19, is charged with murder and concealment of a death in the case. He remains in the Rowan County jail without bond.

Lauren Grimes, 19, also remains in jail under a $300,000 secured bond. She is charged with felony being an accessory to murder after the fact. According to an arrest warrant, Grimes helped conceal the crime scene and hide Earley’s remains.

“She could take off and be gone,” Earley said.

Earley said she hopes that Harrington is rearrested and another bond added for dismembering her son’s body.

“You can kill someone, you can cut them up, you can burn them, and you pay half a million and get to go home. And that’s wrong,” she said.

“She did some sick stuff to my child. She’s home because she had the money,” Earley said.

“He should’ve been planning a wedding now. She was supposed to be getting a ring, and they took all of that away,” Jessica Earley, said pointing to Smith.

Earley said she’s afraid of what she’ll hear during a trial because “I’ve done heard so much evil they did. I just can’t bear no more.”

“It was helping me thinking he died right away. It’s awful. As a mother, you’ve got to think, ‘Well, I hope he died instantly.’ You shouldn’t even think like that. But he didn’t die right away; he suffered. And they turned up the radio, and I don’t know what else they did. And I’m scared to know what else they did. You don’t let someone like that walk free,” Earley said.

The Sheriff’s Office said Earley went to Rosas’ home for a prearranged drug transaction. Rosas was supposed to buy a small amount of marijuana. An argument broke out, and Earley was beaten with a bat.

“He was a good person, definitely a family person. We were very close. He worked. He had a lot of friends, obviously,” Jessica Earley said. “He was my baby, and he’s gone. The people that don’t know him … it just hurts me a lot.”