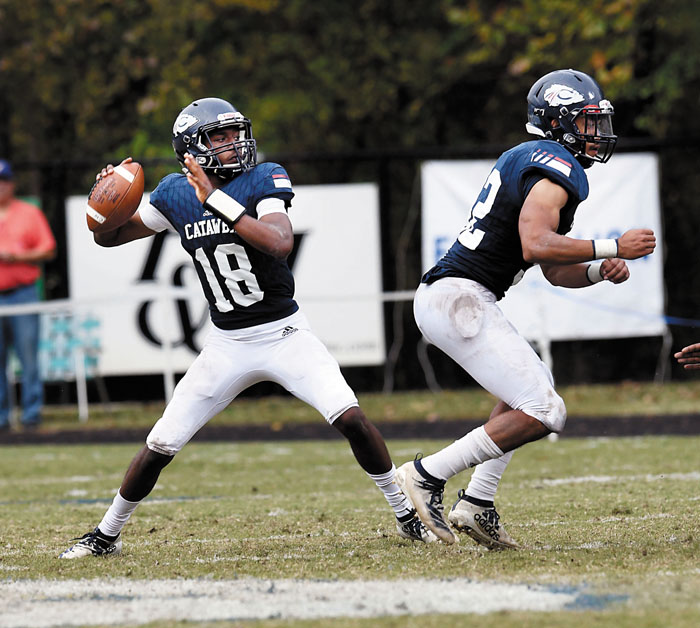 Wayne Hinshaw file photo/for the Salisbury Post ... Catawba quarterback Kaylon Wade (18) is a true freshman from Kings Mountain who has been pressed into action due to injuries. Blocking for Wade above is running back Andrew Bynum, during an earlier game against Mars Hill. Catawba hosts Lenoir-Rhyne on Saturday at noon.

SALISBURY — This is Catawba’s 100th year of football. This will be the Indians’ 1,000th football game.

Pessimists speculate Saturday’s South Atlantic Conference contest with Lenoir-Rhyne at Shuford Stadium might be the worst of those 1,000.

Fortunately, Catawba head coach Curtis Walker isn’t a pessimist. The Indians will show up. Kickoff is at 12:05 p.m.

“We’ll play the best we can, and our young guys are going to have some fun,” Walker vowed at Tuesday’s press conference. “The hardest part for me is already knowing this is the last game of the season. I’ve been involved with a lot of championship teams. You always want to go into that last game of the regular season with the idea that there will be playoff games to come. You want to be looking forward to that next part of the season. But this is where we are right now.”

Catawba has known for a while that this season would end with Game 11. Even the most dedicated Catawba fan knew it on Oct. 5, when the Indians lost, 52-24 at Limestone, to plunge to 1-4.

It’s been a train wreck since then, not just the weekly losses, but with injured players toppling over like dominoes. The 59-14 pummeling at Carson-Newman was followed by yielding 99 points in home losses to SAC middle-of-the-packers Newberry and Mars Hill. On the road the last two weeks, Catawba’s defense played better as freshmen settled down and settled in, but the depleted offense coughed and sputtered like an old push mower.

“The gashes in our defense are getting smaller,” Walker said. “We’re still making mistakes, but they’re not as big.”

Still, Catawba (1-9) is just about certain to lose 10 games in a season for the first time in its proud history. The Bears (10-0) have never been overly fond of Catawba and will be only too happy to administer the final blow.

Lenoir-Rhyne is ranked sixth or seventh in NCAA Division II, depending on which poll you prefer. The Bears prevailed in fierce showdowns in Hickory with Carson-Newman and Wingate and are firmly in command of the SAC race and looking forward to the postseason. The Bears don’t have a weakness. It’s hard to say if they’re better on offense or defense, because they’re really good at both.

Coming at opponents out of an old-fashioned Wing-T,  with some new wrinkles, Lenoir-Rhyne ranks in the top 15 nationally in rushing offense (267.6 yards per game), while Catawba ranks 159th out of 166 teams in rushing defense. That’s likely to be a problem.

“They run an offense different from the rest of the league, and that’s a significant advantage for them because you’ve only got a week to prepare for it,” Walker said. “We’ll try to show our guys in practice all the looks and formations that Lenoir-Rhyne is going to be showing them on Saturday. But it’s a hard offense to stop. There’s some sleight-of-hand. They do some tricky things with their tight end.”

Lenoir-Rhyne ranks ninth nationally in rushing defense (80 yards per game), while Catawba’s running game is in the hands of Andrew Bynum, the third-team back before injuries struck. With a lot of Catawba offensive linemen out, including veterans such as Kevin Norton and Zach Mayo, that part of the equation is also likely to be problem.

If Catawba can’t run the ball, that puts the offense on the shoulders of true freshman quarterback Kaylon Wade, who was redshirting until he was pressed into service in October after the Indians lost their second QB. For the next man up after the next man up, Wade has been good. He’s unflappable and rocket-armed, but opposing defensive coordinators know he’s young and still learning, and they’ve been coming after him.

“We’ve seen every type of blitz you can imagine,” Walker said. “They’ve thrown everything but the kitchen sink at him, but he’s done well with it.”

Lenoir-Rhyne harasses quarterbacks about as well as anyone in D-II. The Bears are in the top five in sacks with 37. That’s almost sure to be a problem.

There’s always the chance that the Bears will turn it over and Catawba can stay in it, but that’s a slim chance. For the season, L-R rates in the top 20 nationally in turnover margin at plus-10.

As if Catawba needed more to worry about, special teams will likely be an issue. Catawba has been the worst in D-II (166th out of 166) as far as hemming in opponents on kickoff returns. Catawba allows a gruesome 32.6 yards per return. So if a Bear fields a kickoff on his 2, he can expect to lug it out to the 35. As far as defending punt returns, Catawba hasn’t been the worst in D-II, but it’s been among the worst, allowing 15 yards per return.

In contrast, when L-R kicks off to the 2, an opponent’s average return has been to the 17. And 83 yards is a long way to go against a rugged Bears’ defense that includes a couple of former Cabarrus County studs — linebacker Clayton Horn (Mount Pleasant) and lineman Dan Louba (Hickory Ridge).

Catawba will put up the best fight it can, but the roster has been smashed by injuries. It’s hard to believe, but Catawba lost four more key guys during last week’s 21-14 loss at Uva-Wise. (L-R beat UVa-Wise, 63-6).

Cornerback Cris Page, one of Catawba’s most dependable defensive players for years, went down last week. So did leading receiver Gavin Rose. So did DB Caleb Allen and guard Blake Bridges.

At times, at UVa-Wise, Catawba’s defense had six true freshmen on the field.

“We have to build depth in order to get back to where we want to be as a program,” Walker said. “Injuries affect a Division II program more than a D-I program. There’s a bigger drop off to that next man, but our young guys are fighting, they’re learning, they’re getting better.”

The Bears romped, 63-21, against the Indians last season, but Catawba won three straight meetings before that. Catawba leads the series 49-45-4. This is the 99th meeting between the old rivals.

Injuries proved too much for Catawba to overcome this season. They’ve led up to a finale in which Catawba is a 33-point underdog at home. That’s almost an unbearable scenario.

“This is our Senior Day, and unfortunately, a lot of seniors who have been so important to the program, won’t be in uniform for it,” Walker said. “That’s a tough thing to swallow, but whether we’re 1-9 or 10-0, we’re always going to play hard. Then we’re going to go out and recruit more young men who are passionate about football and looking for a challenge.”