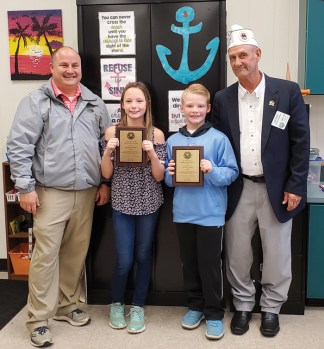 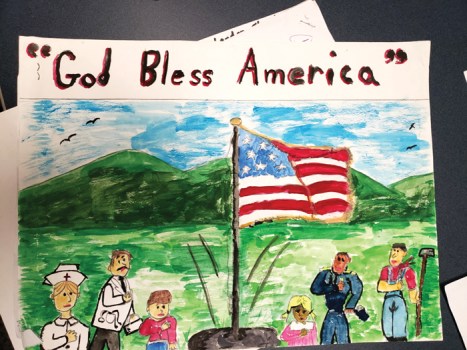 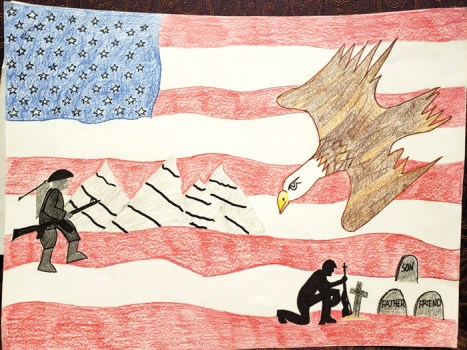 Submitted photo Landon Fleming's winning poster in the Americanism contest. He is a third-grader at Bostian Elementary School.

The veterans’ group AMVETS annually sponsors an Americanism Contest for schools across the U.S. in grades kindergarten through 12.

The winners at Bostian Heights Elementary School were honored Tuesday with a presentation that included Mark Beaver, third vice commander of the AMVETS Department of North Carolina.

Mckenzie Powers, a fourth-grader, wrote: “These men and women have served so that we may have choices. They are not forced to, yet willingly fight for our country. Many leave behind family members and may go months, even years before returning home. Veterans are those young and old who bravely served for our freedom.”

Third-grader Landon Fleming wrote: “I would say thank you to a veteran because they risked their  lives for our freedom. They also sacrificed time with their family and friends to protect our country and our freedom. My picture represents soldiers in active duty, honoring lives that were lost, and American freedom. Thank you, veterans!”

Mckenzie’s mother, Jatana Powers, along with her grandparents, Deborah Patterson and Gary Patterson, attended the ceremony. Landon’s father, Tony Fleming, also was there.