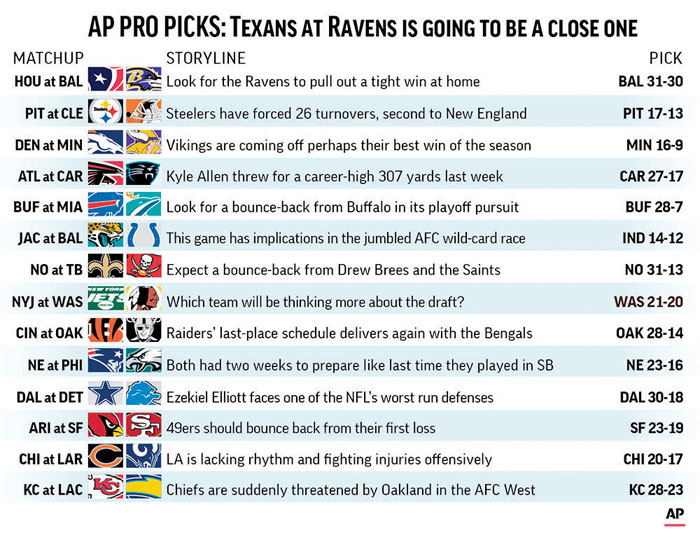 This is the first of what could be many meetings between two dynamic young AFC quarterbacks when Deshaun Watson and the Houston Texans visit Lamar Jackson and the Baltimore Ravens on Sunday.

It might not even be the only one this season.

Watson was the 12th overall pick of the 2017 draft after leading Clemson to a national championship, Jackson the disappointed final choice of the first round a year later out of Louisville.

It took the Texans one game to commit to Watson as the starter when he was a rookie. The Ravens needed a little longer last year to decide Jackson was more than just the heir apparent to Joe Flacco, the 11-year starter who was benched in Week 11.

Watson and Jackson go into their meeting at the helm of division leaders, the Texans (6-3) in front in the AFC South and the Ravens (7-2) atop the AFC North.

If the playoffs started this week, Houston would be a wild-card win away from another trip to Baltimore. The Ravens, who opened as 5½-point favorites, are going to hang on to that first-round bye at least another week.

KNOCKOUT POOL: The AP prognostication crew has been knocked out thanks to New Orleans’ loss to Atlanta. If we were still in the game, our pick would be CAROLINA.

The Steelers have forced 26 turnovers, second to New England. The Browns are tied for fifth with the most turnovers. Look for the Pittsburgh defense to continue the team’s recovery from a 1-4 start.

The Vikings are coming off perhaps their best win of the season at the Cowboys. But Broncos coach Vic Fangio gave the Minnesota offense fits twice last season as Chicago’s defensive coordinator. This game may be closer than people think.

Knowing Cam Newton is now out for at least the rest of the regular season with a foot injury, Kyle Allen threw for a career-high 307 yards in the snow in a loss at Green Bay. Two straight division wins is a tall task after the Falcons’ shocker over the Saints.

Ryan Fitzpatrick is doing his best to keep the Dolphins competitive (two straight wins), and he gets to face one of his seven former teams. He played more games for the Bills than any team. Look for a bounce-back from Buffalo in its playoff pursuit.

No. 21 Jacksonville (plus 3½) at Indianapolis

Nick Foles will be the starter now that rookie Gardner Minshew has come back to earth a bit. This game has implications in the jumbled AFC wild-card race. If Jacoby Brissett returns from a knee injury, that should be enough for the Colts in a low-scoring game.

Expect a bounce-back from Drew Brees and the Saints after the loss to the Falcons. A Tampa Bay defense that struggles to defend the pass could be the perfect antidote.

Will the Jets defense give up four touchdown passes to a rookie quarterback for the second week in a row? Probably not, since the Redskins didn’t go with Dwayne Haskins as early as the Giants turned to Daniel Jones. Which team will be thinking more about the draft? Let’s go with the Jets on that.

The Raiders’ last-place schedule delivers again with the winless Bengals. Expect the Raiders to take advantage again to continue an unexpected surge to playoff contention.

The first meeting of these teams since the Eagles won the 2018 Super Bowl is also the Patriots’ return from their open week following their first loss, to Baltimore. Both teams had two weeks to prepare, just like the last time they played.

Ezekiel Elliott faces one of the NFL’s worst run defenses a week after getting bottled up by the Vikings. The Cowboys need to bounce back against another NFC North opponent, otherwise the outlook gets dim for a team that started the season with high expectations. The Lions might be without Matthew Stafford again.

This line must be based more on the first three quarters of the first meeting just two weeks ago. That was before Kyler Murray brought the Cardinals back in a 28-25 loss, keyed by an 88-yard touchdown pass. The 49ers should bounce back from their first loss, but not enough to satisfy the oddsmakers.

The Bears beat the Rams when Sean McVay’s team was healthy last year in Chicago. So it stands to reason that Chicago can do it again with LA lacking rhythm and fighting injuries offensively.

It’s the second game back for Patrick Mahomes coming off his knee injury, and the Chiefs are suddenly threatened by Oakland in the AFC West. This could be the last chance for the Chargers to stay in the division race, but that desperation won’t be enough.