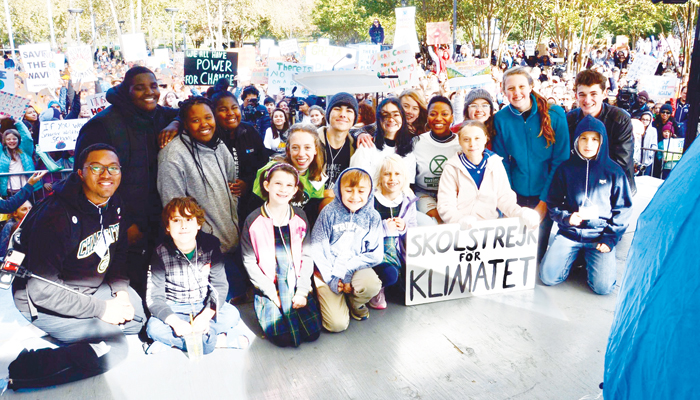 Aaron Burleson took his children to the climate rally — a choice he said they had to make because they wanted to show support for combating climate change and not be just an excuse to skip school.

Burleson and Ashley Honbarrier, the founder of nonprofit Happy Roots, said their families are passionate about the environment, something they passed on to their kids.

The rally was youth-led by Thunberg and 14-year-old Mary Ellis Stevens. Stevens has rallied every Friday for 31 weeks in Charlotte. The Charlotte rally was school strike Week 64 for Thunberg, who has traveled and participated in climate rallies in different cities.

Burleson said the decision showed him that the climate rally was important to his son, Grayson Burleson, 14. He ruined his perfect attendance and missed wrestling practice Friday.

“School is important, but this is more important,” Aaron Burleson said.

An estimated 1,200 people attended the rally at the Charlotte-Mecklenburg Government Center.

A.J. Burleson, 10, and Jackson Rimmer, 9, also participated in the rally.

Honbarrier said the term “climate change” gets misconstrued and many see it as a partisan issue. She sees it as not a Republican or Democratic issue but one about caring for the environment and having respect for fellow humans.

The four kids left the rally pumped up and excited to get more involved and get others involved in the cause. They are looking at options to bring environmental activism to Rowan County.

“It’s very important that they stand up and want this change now,” Aaron Burleson said.

Stevens relayed a message in a tweet from Thunberg’s speech on Friday: “I can tell you I’ve not found much hope in politicians or corporations. It is the people who are our biggest source of hope right now.”

At a young age, they may not be able to vote but youths can certainly use their voices, Aaron Burleson said, citing a quote: “If you don’t stand for something, you’ll fall for anything.”

Honbarrier said it went a long way that the four youths heard about climate change from someone their own age, and especially being able to see Thunberg up close. Aaron Burleson said Thunberg was mature and showed that action needs to be taken immediately.