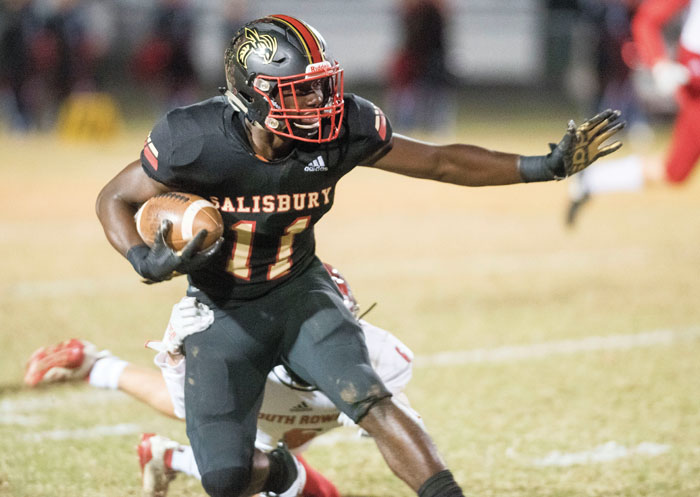 JON C. LAKEY FILE PHOTO/SALISBURY POST ... Salisbury’s Jalon Walker (11) returns an interception during last week’s win over South Rowan at Ludwig Stadium. The Hornets host Mount Pleasant on Friday, in the first round of the 1A state playoffs.

The process for determining the teams in the high school football playoffs is complex, and it’s not perfect, but it beats the alternatives.

If you’re a fan of East Rowan (5-6) or Central Davidson (6-5) or someone else that had a decent season but won’t be playing on Friday, you’re not fond of a current structure that greatly rewards strength of schedule. Unfortunately for Central Davidson, three of the Spartans’ wins in the Central Carolina Conference came against schools ranked in the bottom dozen in 2A.

But schools from football-rich areas that went 8-3 against challenging schedules got tired of being seeded behind schools that went 10-1 against a parade of cupcakes. And coaches got tired of losing drawings for seeds or playoff berths. People complained. The NCHSAA made tweaks to the system to reward playing stout schedules.

What we have now, with MaxPreps helping out the NCHSAA, is a ranking system that eliminates ties and drawings. Every game counts. No games are dropped. Wins matter, but the formula used by MaxPreps heavily weighs quality wins, while lightly weighing wins against weak opponents. Losses can be good losses or bad losses depending on the strength of the opponent.

Strength of schedule explains how Crest (9-2) received a better seed than Statesville (11-0).

Based on dozens of conversations I’ve had  lately, a lot of fans don’t understand the process for determining which teams are in the playoffs, so let’s start there.

Football is the only sport in which each of the four classifications is subdivided into AA (large) or A (small). That means eight football state champions, instead of four like we have in the other sports.

Schools don’t declare themselves 1AA or 2AA or 3AA or 4AA before a season starts. There’s no certain number of students that makes a school AA.

Conferences aren’t strictly East or West, as they once were. Which region a team plays in is determined by who qualifies for the playoffs.

There are “split” leagues that include both 2A and 3A teams or 3A and 4A teams or whatever. There are minimum requirements, but what is notable is you can finish fourth or fifth in a 3A/4A split league and still be seeded as a conference champ if you were the top 3A team.

After all the conference qualifiers are determined, the bracket is filled out with “at-large” teams. The team in each conference that just missed out on an automatic berth is considered next. That list would include the fourth-place team from a large league like the CCC and third-place teams from leagues such as the SPC, NPC, YVC and CPC. These teams are then added to the field, one by one, starting with the strongest “adjusted MaxPreps ranking.” Once a team is added to the field, the next team in line in its conference moves up to take its place.

In the CCC, where the automatic qualifiers were Oak Grove, Salisbury and Thomasville, Ledford was next in line. Once Ledford got in, North Davidson was eligible. But it’s important to remember that teams can’t “leap frog” another team in their league. North Davidson couldn’t get in, until Ledford was in. After Ledford, Central Davidson was up next, but the Spartans were 71st in the 2A adjusted MaxPreps rankings and didn’t make the 64-team field.

In the SPC, because of their conference standing (tied for third, with Central Cabarrus holding the tiebreaker), A.L. Brown couldn’t get in the playoffs until Central Cabarrus got in. That was the case, even though A.L. Brown (27th in 3A) has a stronger adjusted MaxPreps ranking than Central (31st) and eventually got a slightly better seed (10) than the Vikings (11).

In the NPC, Statesville and West Rowan were the automatic qualifiers. Next in line to make the 3A playoffs as an at-large team from the NPC was third-place South Iredell. South Iredell was ranked 58th in 3A in the adjusted MaxPreps rankings, so it waited a while. Only after South Iredell got in, could fourth-place East Rowan be considered.

East Rowan was 75th in the 3A MaxPreps adjusted rankings, behind Ashbrook (2-8) and quite a few others, so the Mustangs didn’t come all that close to making the field of 64.

Swansboro, No. 63, also didn’t make it. Swansboro appears to have been boxed out by West Carteret, ranked 73nd, as far as their conference standings. The teams with the weakest adjusted MaxPreps rankings that made it in 3A were North Brunswick (64th) and Fayetteville E.E. Smith (65th).

Once all the playoff teams have been determined, that’s when the ADM figures, which measure student enrollment, become a factor. Those figures determine whether a school is playing for the A or AA championships in its classification. There’s not some sort of numerical cut-off. The larger 32 schools in the field are deemed AA, while the smaller 32 are A.

Once the A and AA stuff is sorted out, geography comes into play to form a 16-team bracket. Based on longitude, the 16 eastern-most schools are East, while the rest are West. Piedmont schools that we think of as “West” can fall in the East. Schools in the Lumberton, Pinehurst or Richmond County areas that we think of as being “eastern,” can land in the West. It changes every year, depending on who makes the playoffs.

North Rowan has played South Robeson in the first round of the playoffs. East Rowan beat South Brunswick  at home in the first round once, and then headed to Havelock. Carson made a pretty decent playoff run as an “East” team once. Salisbury has welcomed Pasquotank to Ludwig Stadium for a first-round game.

It was a little surprising that North Rowan, which has a first-round bye tomorrow, and Salisbury were designated “East” this year, but it can happen. It’s going to be a factor, travel-wise, for the Cavaliers, the Hornets and the teams they play. Princeton, North’s Rowan’s likely opponent in the second round, would be traveling to North from the Goldsboro area. If Salisbury wins in the first round, it’s probably headed 230 miles east to play Washington.

West Rowan and Freedom are both seeded as conference runners-up in the 3A West bracket and have identical 7-4 records, but West is traveling because Freedom is No. 39 in the 3A adjusted MaxPreps rankings, while West Rowan is No. 42.

East Rowan (5-6) wanted to make the playoffs, but not making it wasn’t all bad. Seniors got to win their last game. That doesn’t happen for very many players.

East won against two teams that made the playoffs (2A Mount Pleasant and 1A North Stanly). The other victories came against South Rowan, Carson and North Iredell.

East lost close ones against North Rowan and South Iredell.

Injuries were a factor. If the passing combination of Logan Forbis and Cooper Wright had been healthy all season, things may have gone differently.

In Friday’s 49-0 win against North Iredell, junior Sammy Pinckney broke the school record for rushing yards in a season. Pinckney rushed for 1,830 yards on 262 attempts to lead Rowan County. The previous East record was Thomas Lowe’s 1,779 yards in the 2007 season, his sophomore year. Lowe’s effort came in 12 games and included a playoff loss to Charlotte Catholic.

Pinckney had five 200-yard rushing games this season, including the finale.

Courtney also etched his name in the school record book with his 346-yard outing against South Rowan to start the season.

Sophomore Nathan Chrismon was on his way to a huge season as a receiver/running back when he was injured in the eighth game.

Drew Huffman threw 13 TD passes, the most in the county, during the regular season.

He closed his high school football career with a TD pass to Austin Peacock in a 55-7 loss to Salisbury.