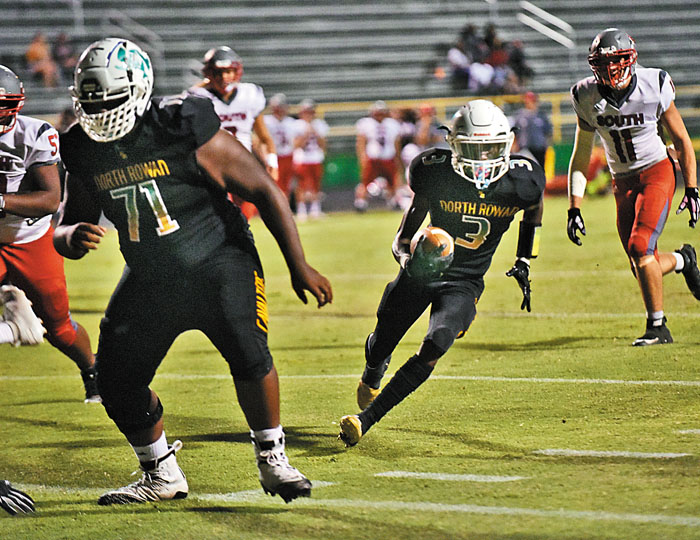 Wayne Hinshaw file photo/for the Salisbury Post ... North Rowan’s offensive line got stronger as the season went on. Kendall Reid (71) blocks for running back James Gladden (3) during a game against South Stanly.

SPENCER — North Rowan is a run-first football team, but the Cavaliers had so much trouble moving on the ground early in the season there was speculation that standout back Malcolm Wilson might be injured.

But, as it turned out, there was nothing ailing Wilson. The struggles of August could be traced to those big guys trying to block for him. They weren’t in sync yet. Even Wilson wasn’t going anywhere without something resembling a hole to run through.

After those three games, Wilson was averaging 2.5 yards per carry with zero rushing TDs. That was in stark contrast to 2018, when he’d been a holy terror, rushing for 25 touchdowns and averaging 9.4 yards per carry on his way to player of the year honors in Rowan County and the Yadkin Valley Conference.

“There were a couple of factors early in the season,” North head coach Ben Hampton said. “First game, we played Salisbury and second game we played West Rowan. We knew, at the time, those teams were good on defense, but now we know that they are really stellar. Then, our third game at Lexington, we didn’t have our starting quarterback (Kyree Sims). The other thing was that our starting center, Kendall Reid, was out those first three games. That changed things. We had to move a tackle (Justin Hughes) to center and had a freshman (Ismael Steele) at tackle. It’s tough to go up against Salisbury and West with inexperienced guys, and we had a lot of guys out there without much offensive line experience.”

Reid, a 290-pound senior, returned for the Carson game in Week 4. At the time, with North 0-3 and coming off a discouraging loss at Lexington, the game was considered a toss-up. North did most of the tossing and won it, 45-10.  Wilson rushed for 234 yards and scored four touchdowns.

“That was  a great night, finally getting back out there after some medical issues,” Reid said. “Seeing Malcolm get all those yards and all those touchdowns, we knew the offensive line could do the job. In those early games, the offense just wasn’t clicking.  But that’s the night we started to get a flow going.”

Reid’s size meant a lot to the o-line. So did his experience. He and the husky Hughes, who was able to move back to left tackle when Reid returned, are the veterans of the unit.

“It was big to get Kendall back as a veteran on the offensive line, no doubt,” Hughes said. “We go way back, all the way to playing YFL together as third-graders. But I’d also say a lot of our getting better as an offensive line was due to starting to bring more focus and intensity to practice. We put up some big numbers against Carson. We started looking to do that every week.”

While Ben Hampton knew that Reid and Hughes would be good, if healthy, the Cavaliers had to figure out the rest of it upfront. Ben’s younger brother, Patrick, coaches North’s offensive line. The Cavaliers plugged holes with good athletes who had backgrounds on the defensive side of the ball.

“I just started playing football in eighth grade, and I played both ways when I was a sophomore,” Fair said. “Defensively, I’ve been a 3-technique tackle. It’s been an adjustment to offense. On defense, you fly around, but on offense, you have to execute. We’ve found our groove. We got better in practice, and that led to being better in games.”

Starting with that Carson game, North hasn’t lost. No, they didn’t play anyone else like Salisbury or West Rowan, but there was a very big comeback win at East Rowan, right after Carson.

When North Rowan got into 1A Yadkin Valley Conference play, it went 6-0. There were victories against three playoff teams — Albemarle, North Stanly and South Stanly.

Wilson got loose on a screen pass for the 77-yard play that decided the East game, and hasn’t looked back. In his last five games, he’s had 939 rushing yards, 20 rushing touchdowns and  11.2 yards per carry.

“We’ve gotten the hang of working together as a unit,” said 250-pound left guard Kevin “KJ” Krider. “I’ve had to make a transition from defense, and I’d say offense is definitely harder. But the older guys have helped me, and I’ve learned a lot from the coaches.”

It was the game at Albemarle on Oct. 11 that provided the biggest character test of the season for the Cavaliers. North got ambushed by an inspired team and  looked beaten, but it came back with two late touchdowns to survive, 36-33.

“For me, that game was the most exciting one,” Hughes said. “Albemarle was very tough, the best defense we’ve seen since our early games. There was adversity that night, a lot of it, but we fought and overcame it.”

Two weeks later, the much anticipated showdown with North Stanly turned out to a breeze.

“North Stanly was supposed to be the toughest game in our league, but we were just so prepared and so focused for that game, that it wasn’t a problem,” Hughes said.

While four of North’s offensive linemen weigh at least 250, the lightest guy is Leigh Patterson, the sophomore right tackle. He weighs 208 and is another former defensive player, but he’s improved each week. Offensive lines are only a strong as their weakest link, and Patterson decided it wasn’t going to be him.

“I’ve gotten better at everything,” Patterson said. “I’m getting after it more.”

North has 13 seniors on the roster. Three  start on an offensive line that has transformed from a question mark to an exclamation point during an eight-game winning streak.

“I still wouldn’t say we’ve got what you would call imposing linemen,” Ben Hampton said. “But they play hard and get after it. They’ve rallied together as a unit and they play together well. They’ve been a big part of a lot of wins.”

As the No. 4 seed in the 1AA East bracket, thanks to being a conference champion, North has a bye in the first round of the state playoffs.

The seed wasn’t a surprise, but landing in the East was not expected.

“People are talking about it, but it really doesn’t make any difference to me,” Fair said. “We’ll play who we play.”

Anticipating miserable weather would mean a film-watching day on Tuesday, North was on the field working on Monday, with the offensive linemen down in their corner of the practice field with Patrick Hampton. … North’s likely opponent in the second round will be Princeton (9-1), which is a 36-point favorite over East Carteret (3-8). North coaches will have an opportunity to scout that game Friday. It will mean a trip to the Goldsboro area to watch fifth-seeded Princeton, which is coached by Travis Gaster, who has strong ties to Stanly and Rowan counties. His father, the late Jack Gaster, led Albemarle to state titles. … Ben Hampton seemed almost amused by the MaxPreps rankings. “All is know is we won 47-0 Friday and we dropped from 13th to 15th in 1A,” he said. As far as the “adjusted MaxPreps rankings,” North Rowan fares worse. The Cavaliers are 27th in 1A. Princeton is No. 7.