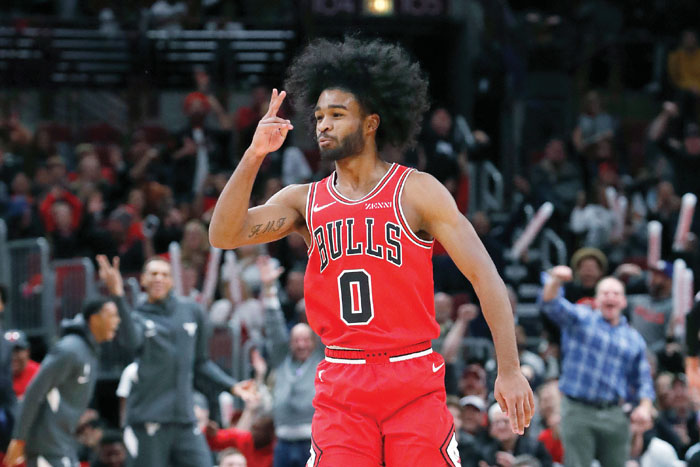 By JAY COHEN AP Sports Writer
CHICAGO (AP) — Coby White waited as Roy Williams walked up the court. Williams playfully bowed in front of his former guard and then gave him a hug before taking off.
It was White’s night, and a beaming Williams loved every moment.
White made a franchise-record seven 3-pointers in the fourth quarter, and the Chicago Bulls pulled away from the slumping New York Knicks for a 120-102 victory Tuesday.
“I had been shooting it bad, so it was good to see that first one fall,” White said. “Then I just got into a good rhythm.”
No kidding.
White missed his first five shots from the field and began the final period with just four points. But the 19-year-old rookie put on a dazzling show down the stretch, delighting a United Center crowd that included Williams, White’s coach at the University of North Carolina.
White and Williams talked before the win. White had been struggling with his shot, and Williams told him to just be himself.
“Just told me if I be Coby, then everything will take care of itself,” White said.
Worked out quite well for the Bulls.
White connected from deep on three straight Chicago possessions during a 24-2 run that made it 109-89 with 5:51 remaining. Backed by chants of “Co-by! Co-by!” he made one last 3 to run the Bulls’ lead out to 120-100 before checking out with 1:31 to go.
“The kid is just a super talent,” Knicks coach David Fizdale said. “He’s got incredible speed, so you have respect it. Once he gets it going, it’s hard to stop. He just broke the game open.”
White finished with 27 points. Zach LaVine had 25 for Chicago, and Wendell Carter Jr. finished with 17 points and 12 rebounds.
New York lost for the sixth time in seven games. Marcus Morris scored 22 points for the Knicks, and rookie RJ Barrett finished with 21 points and nine assists.
“This one was tough,” Barrett said. “When a guy hits seven 3s in the fourth quarter, it’s kind of tough. But we played three great quarters of basketball and we’ve just got to finish it off in the fourth.”
Barrett played his college ball at Duke, where he faced White in Atlantic Coast Conference action.
“I’ve seen that before,” he said. “He’s gonna make shots, he makes tough shots. That’s the kind of player he is.”
It was New York’s first game since team president Steve Mills and general manager Scott Perry expressed concern about the Knicks’ level of play following an embarrassing 108-87 home loss against Cleveland on Sunday night.
New York rallied for a 105-98 victory over Chicago in their first meeting of the season on Oct. 28. Bobby Portis led the way with 28 points and 11 rebounds against his former team, but he finished with just seven points in the rematch.
WORTH WATCHING
Chicago’s Lauri Markkanen is playing with a sore oblique, but coach Jim Boylen said the third-year power forward insists it’s not limiting his play on offense.
The 22-year-old Markkanen was shooting just 38.5% from the field heading into the matchup with the Knicks.
“He’s trying to play through whatever he has and not use it as an excuse,” Boylen said. “I think that’s big time and I think that’s what we need.”
TIP-INS
Knicks: Taj Gibson and Julius Randle each scored 17 points. … G Dennis Smith Jr. played after missing seven games following the death of his stepmother. … C Mitchell Robinson is increasing his physical activity, but he remains in the concussion protocol.
Bulls: F/C Cristiano Felício broke his right wrist when he fell in practice Monday. He is scheduled for an MRI on Wednesday. Felício, who hasn’t played this season, is expected to miss four to eight weeks.
UP NEXT
Knicks: Open a three-game homestand Thursday night against the Dallas Mavericks.
Bulls: Visit the Milwaukee Bucks on Thursday night.
___
Jay Cohen can be reached at https://twitter.com/jcohenap
___
More AP NBA: https://apnews.com/NBA and https://twitter.com/AP_Sports