‘We will always remember these heroes’: Rowan County now has Vietnam memorial

SALISBURY — In an authoritative voice, Dr. Karl Hales announced the names etched into the black granite monument behind him slowly and clearly.

For each of the 40 names, Felicia Eagle and Janis Smith attached a purple ribbon on the brick base of the edifice. The ribbons represented the Purple Hearts these men, all killed during the Vietnam War, were never able to receive in person.

When he finished, Hales said simply, “Ladies and gentlemen, your heroes.”

The day especially hit home with family members, friends and fellow soldiers, sailors and airmen of the men named on the wall.

“You don’t know how much this means to me,” said Ronnie Smith, a Vietnam veteran who says he worked nine years for the establishment of this memorial. “… This is a fabulous day for me.”

Debbie Rinehart said there was no way she was going to miss Monday’s dedication. Her brother, Carl Wayne Thompson, was shot and killed by a sniper in Vietnam on Oct. 5, 1971, and his was one of the 40 Rowan County names on the memorial.

“He loved his country,” said Rinehart, who was a teenager when her brother, a North Rowan High School graduate, died in the war.

“These men gave their all, their ultimate sacrifice. As his sister, I’ll never, ever forget that dedication to our country and our freedom.”

Thompson volunteered for the Army and also a second tour in Vietnam that cost him his life. About 15 years after his death, one of his lieutenants stopped to see the Thompson family in Rowan County, and he told them it was Carl who had alerted the rest of his platoon about the sniper who ended up killing him.

“My brother saved so many people that day,” Rinehart said.

Rinehart’s own late husband, Kenneth, also served in Vietnam as a Special Forces Green Beret. Kenneth’s son, Mark, is a veteran, and their grandson serves in Afghanistan.

“I’m so glad Ronnie worked so hard for this,” said Rinehart, who made a point to touch the monument in her brother’s memory after the dedication.

Smith spoke of seeing a man at the memorial Sunday who was wearing a hat and sunglasses. Smith didn’t recognize him at first, but it was Bruce Rufty, brother of Joe Hearne Rufty, who also died in Vietnam.

Smith knew Joe Rufty, and he said Bruce told him, “Thank God for this memorial. He will always be remembered.”

While serving for a time at Dover Air Force Base in Delaware, where the bodies of fallen Vietnam soldiers were returned, Smith was able to escort his friend’s body back to Salisbury and present the folded U.S. flag at his funeral to Hollifield’s mother.

“We will always remember these heroes,” Smith said.

Greg Edds, chairman of the Rowan County Board of Commissioners, led the Pledge of Allegiance. County Commissioner Mike Caskey, a regular at Tuesday morning’s Frontier Coffee Shop for veterans, read the county’s proclamation in honor of the “names etched in black granite.”

Both the proclamation and monument itself note the 2.7 million American military personnel who served in Vietnam and the more than 58,000 who died in the war.

Amanda Riley, who works at the Hefner VA Medical Center in Salisbury, led the singing of the national anthem. Dale Roth, a retired Air Force chaplain, gave the opening prayer and the benediction to close out Monday’s dedication.

Roth said the memorial is a monument to great heroes, to men who made the ultimate sacrifice during a tumultuous time in the country’s history. 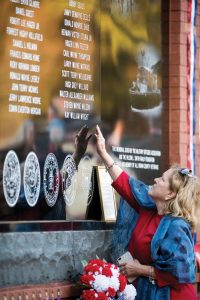 Debbie Rinehart reaches toward her brother’s name on the memorial. Carl Wayne Thompson was killed by a sniper in Vietnam. Jon C. Lakey/Salisbury Post

Men and women who are military veterans understand that freedom is fragile and needs to be protected, Roth said, and in their service they were willing to sacrifice the most precious thing they had — their lives — to safeguard it.

The Vietnam memorial stands just down the hill from a new World War II memorial, which lists the Rowan County men who died in that war. It’s part of the eastern end of the park’s Flag Concourse area.

The Military Officers Association and the Wilson L. Smith Foundation are listed on the Vietnam memorial as its benefactors.

“Our memories and gratitude will never die,” the monument says.

The black granite surface has emblems of each branch of service, background photographs and a quote from President Ronald Reagan spoken from the National Vietnam Memorial in Washington.

Reagan said, “And just as they whom we commemorate were willing to sacrifice, so too must we, in a less final, heroic way, be willing to give of ourselves.”

The Rowan County Veterans Honor Guard shot a 21-gun salute and played taps toward the end of the ceremony.

As Hales read the names on the new memorial Monday, there was hardly any other sound, save a train’s horn in the distance.

“May God keep them always in the palm of his hand,” Smith said.

Two in one: Legion Auxiliary celebrates 100th anniversary, plus…