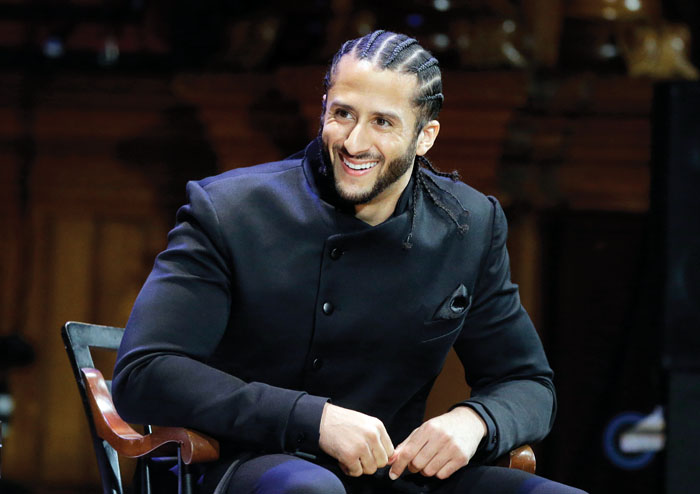 Colin Kaepernick plans to audition for NFL teams on Saturday in a private workout arranged by the league to be held in Atlanta.

The exiled former Pro Bowl quarterback posted on Twitter: “I’m just getting word from my representatives that the NFL league office reached out to them about a workout in Atlanta on Saturday. I’ve been in shape and ready for this for 3 years, can’t wait to see the head coaches and GMs on Saturday.”

A person familiar with the plans told The Associated Press the league’s decision to invite all 32 teams to watch Kaepernick “came out of the blue with no prior communication.” The person said Kaepernick’s team was given a 2-hour window to accept the invitation and was denied a request to schedule the tryout on a Tuesday or another Saturday.

Kaepernick’s representatives have asked the league to provide a rolling list of teams that plan to attend the workout to ensure it’s a “legitimate process,” according to the person who spoke on condition of anonymity because details haven’t been made public.

Kaepernick hasn’t played since 2016 with the San Francisco 49ers. He helped start a wave of protests about social and racial injustice that season by kneeling during the national anthem at games.

The NFL in February settled a collusion grievance Kaepernick and former teammate Eric Reid filed against the league. Reid now plays for the Carolina Panthers.

NEW YORK (AP) — Lamar Jackson has been one of the most dynamic players in the league this season.

The Baltimore Ravens quarterback has 2,036 passing yards and 15 touchdowns, along with 702 rushing yards and six rushing TDs. Jackson went 15 for 17 for 223 yards and three touchdowns and added a dazzling 47-yard touchdown run in the Ravens’ 49-13 rout of winless Cincinnati, Baltimore’s fifth consecutive victory.

And Jackson and the surging Ravens have flown all the way to the top of the latest AP Pro32 poll .

Baltimore received seven of the 12 first-place votes for 375 votes in balloting Tuesday by media members who regularly cover the NFL.

“Shakeup at the top. The Ravens earned the top spot with the victory over the Patriots,” said Charean Williams of Pro Football Talk. “How many No. 1s are we going to have this year?”

There have been three so far.

The New England Patriots, who were on their bye week, received the remaining five first-place votes for 372 points and moved up a spot to No. 2. The Patriots’ only loss this season came in Week 9 at Baltimore.

The San Francisco 49ers, who were the league’s last unbeaten team, dropped from the top spot to No. 3 after losing 27-24 in overtime Monday night to the Seattle Seahawks. Russell Wilson and the Seahawks moved up a spot to No. 4 and trail the 49ers by a half-game in the NFC West.

The NFC North-leading Green Bay Packers gained two spots to No. 5 after holding on to beat the Carolina Panthers 24-16.

And the New Orleans Saints fell four spots to No. 6 after losing 26-9 to the Atlanta Falcons, who entered the game with one win on the season.

“The Saints just received a rather loud wakeup call in the Big Easy, courtesy of the last-place Falcons,” said Ira Kaufman of Fox 13 in Tampa, Florida.

The Minnesota Vikings, who trail the Packers by a game in the division, inched up a spot to No. 7.

And the AFC South-leading Houston Texans also moved up a spot to No. 8 despite being on a bye. The Texans head to Baltimore to take on the Ravens on Sunday.

The sputtering Kansas City Chiefs fell three spots to No. 9 after losing to the Tennessee Titans in Patrick Mahomes’ return. The Chiefs have lost four of six after getting off to a 4-0 start. They will close out Week 11 when they face the Los Angeles Chargers in Mexico City on Monday night.

And despite losing at home to the Vikings on Sunday night, the Dallas Cowboys rounded out the top 10 for the second consecutive week.

“Cowboys could be wasting a lot of talent if not in (the) playoffs,” Fox Sports’ John Czarnecki said.

AIR FORCE ACADEMY, Colo. (AP) — The things Los Angeles Chargers running back Austin Ekeler misses about growing up in Colorado: Mountains, all four seasons and being able to catch his breath after a long run.

That thin air left him winded a few times Tuesday during a practice at the Air Force Academy.

Ekeler and the Chargers (4-6) are elevating their game by spending a few days at the academy ahead of their Monday night clash with Kansas City (6-4) at Estadio Azteca Stadium (elevation: approximately 7,300 feet) in Mexico City. Falcon Stadium on the grounds of Air Force is around 6,600 feet.

“I’ve been in California for a long time now,” said Ekeler, who went to high school in Eaton, Colorado, and attended college at Western Colorado in Gunnison. “I’m definitely not used to it.”

“Going from sea level to 7,300, I didn’t feel comfortable doing that,” Chargers coach Anthony Lynn said. “It’s a little bit of an ease of mind for players. It has a mental effect, I believe.”

The Chargers don’t do something like this before playing in Denver against the Broncos. Then again, that game is at 5,280 feet.

“I definitely want to give the guys the experience of running around and practicing in this type of environment,” Lynn said.

After all, catching Chiefs quarterback Patrick Mahomes should be first and foremost on their minds — not their breath.

Another possible variable? The footing.

Last season, the game between the Chiefs and Rams was moved to Los Angeles because of poor field conditions at Azteca Stadium. Officials at the stadium converted the field back to natural grass, and a delegation of NFL officials recently visited the site, where they found the field in great condition.

Not that Lynn’s giving it much thought.

“Both teams have to play on it,” Lynn said. “We’ll bring our long (spikes) in case we need them. The field is not a distraction for us.”

Just in case, though, Bosa said he’s “getting prepared to be slipping around.”

Along with training at altitude, the Chargers are using their visit to Colorado as a bonding experience. It’s a chance to hang out for five or so days.

“We’re doing some team-building activities — keeping the guys busy and together,” Lynn said. “When we’re home, guys leave and go home to their families. Here, they go back to the hotel and still spend time together … I could see the benefit.”

For Ekeler, it’s also an opportunity to see his grandparents, who are paying him a visit Wednesday on an off day.

More than anything, he’s just relishing being back home.

“Back in California, it seems every day is the same warm day,” Ekeler said a day after it snowed around Colorado. “I miss Colorado, the open space. Where we are in California, it’s roads, parking lots and buildings. It’s good to see the mountains always — the open land.

“Out in California it’s summer all year. I grew up around the seasons. That’s why I miss them.”

NOTES: OT Russell Okung (groin) got in some work on the side Tuesday. “I’d love to see him play,” Lynn said of Okung’s availability for Monday’s game. “If he can’t go, he won’t go.” … Lynn isn’t sure how long right tackle Sam Tevi will be sidelined after undergoing knee surgery Friday. “Could be a couple weeks, could be next week. I don’t know,” Lynn said. “We’ll see how he progresses.”

Shildt wins NL Manager of the Year days after…