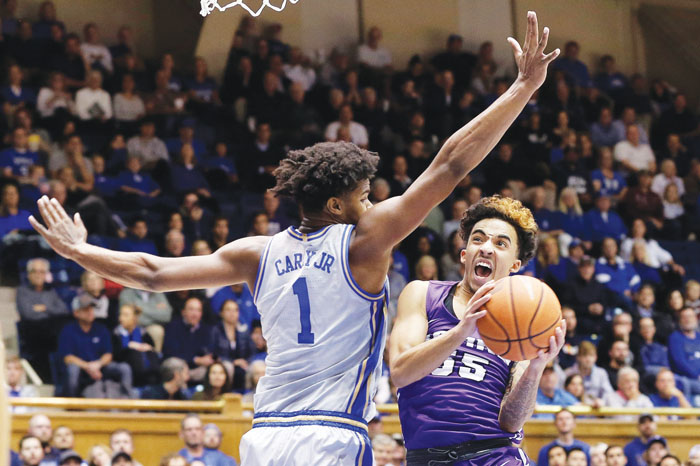 DURHAM (AP) — Duke coach Mike Krzyzewski is pushing his young Blue Devils to worry about defense above all else, both in the intensity of their fullcourt pursuit and their ability to attack the right matchup.

That approach, he said, is “how our team is going to be built.”

And the second-ranked Blue Devils are showing the ability to meet the Hall of Famer’s expectation in their first games together.

Fellow freshman Vernon Carey Jr. added season highs of 17 points and 10 rebounds for the Blue Devils (3-0), who ran off 19 straight points to build a 25-5 lead by midway through the opening half. That margin reached 57-20 by halftime, with Duke shooting nearly 57% and scoring 26 points off turnovers for the game.

“I’d have to say our defense is probably the best part of our offense right now,” senior Jack White said. “We’re forcing turnovers and getting out in transition and really just getting some easy buckets to start the game so guys can get in a groove.”

Jones — the returning floor leader for a team that has turned over its rotation with another recruiting wave — played 9 minutes. He left after colliding with Central Arkansas’ Aaron Weidenaar as the two chased a loose rebound with 7:57 left before halftime.

Jones laid on the court holding his head then rolled over onto his stomach while being attended by team medical staff, though he was able to eventually walk slowly to the bench. He spent the second half on the bench talking with coaches and teammates wearing a warmup shirt over his jersey.

Rylan Bergersen scored 13 points for the Bears (1-3), who were overwhelmed from the start with long stretches between baskets and a series of throwaways and deflected-pass turnovers. Central Arkansas shot just 5 of 23 (21.7 with 15 turnovers in the opening half.

“You fight pressure at the rim,” Bears coach Russ Pennell said. “And I thought we did the opposite. … We have a rule: we don’t throw bounce passes on the perimeter. We threw like four that got intercepted. And I think that’s what pressure does to you. It makes you do things that are kind of uncharacteristic.”

Central Arkansas: This was one of several tough matchups on the schedule for the Bears, who have four returning starters and are picked to finish fifth in the Southland Conference. They lost by 44 points at No. 24 Baylor to open the season, and their second game against a power-conference matchup didn’t go much better.

Duke: The Blue Devils are tinkering with a deep lineup to figure out what works best, though they’re positioned to climb to No. 1 in next week’s AP Top 25 with top-ranked Kentucky’s home loss to Evansville on Tuesday night.

Krzyzewski said Jones took a hit to the temple in the collision but was “laughing and joking” afterward.

“I asked him if he knew my name,” Krzyzewski said. “He said, ‘Michael,’ which was kind of bold on his part.”

Hurt started the first two games but came off the bench in favor of White, then had an immediate impact with 10 first-half points and started the second half over White. Duke also got a look at freshman Wendell Moore Jr. running the point to start the second half with Jones out.

… Central Arkansas shot 3 for 15 from 3-point range and finished with 21 turnovers.