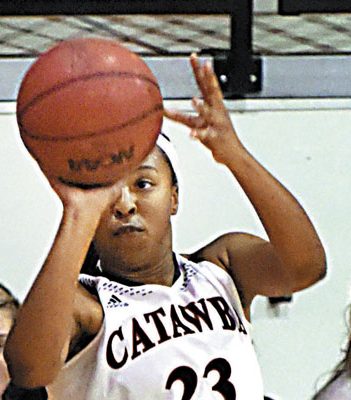 In his playing days at Pfeiffer, Baxter was the point guard on terrific teams for coach Dave Davis.

Davis was one of the acknowledged masters of organized chaos. Pfeiffer played at a frantic pace, fired 3-pointers at a staggering rate, pressed and trapped with hair-on-fire defense to disguise height deficiencies and rotated up to 15 people. Employing all those bodies, made certain that the crazy pace never faltered. Pfeiffer broke 100 frequently. No one got worn out — except opponents.

In his first season at the Catawba helm, Baxter didn’t have the numbers, the healthy bodies, to employ the fast-and-furious style of ball he loves, but after a strong recruiting year, he believes he does.

It remains to be seen how successful Catawba will be at such an increased tempo, but Baxter was practically glowing on Tuesday over the early results. Catawba opened the season over the weekend by beating North Greenville (74-42) and Erskine (77-58). Catawba lost to those two teams to start a 2018-19 season that ended 13-15.

Additions to this season’s roster are redshirt freshmen Lauren Ford, true freshmen Lyrik Thorne, Shaunae Sawyers, Janiya Downs and Sara McIntosh, plus  an experienced player, Toni Tucker, who is back on the team after not being in action last season. So the numbers have changed quite a bit.

Junior guard Shemya Stanback should be as quick and fast as anyone in the SAC and might be the biggest beneficiary of Catawba’s stepped-up pace.

Then there are the freshmen, all of whom are expected to make an impact. Thorne is the starting point guard, with Sawyers, a defensive stopper, getting a lot of minutes at the point. McIntosh is in the post rotation.

Downs has been slowed by a quad injury, and the Indians are being very cautious with her. It appears unlikely she’ll play before December.

Ford is someone a lot of people may not know about. Baxter says she was a certain D-I recruit before tearing up a knee. When D-I schools backed off, Catawba was able to sign her. A 6-footer, she redshirted last season at Catawba while she was recovering from surgery. She’s healthy now and is averaging 8.0 points and 4.0 rebounds in 18 minutes. She’s blocked three shots.

“She’s our smartest player, understands when to help and when not to,” Baxter said. “She’s anchored our defense. Ask the girls who’s been the biggest difference-maker so far, and they’ll you it’s been Lauren. She’s been everywhere.”

In its first two games, Catawba had a 56-38 advantage in the turnover battle, won on the boards and put up nearly twice as many 3-point attempts as opponents.

Catawba is only  18-for-63 on 3-pointers so far, and that percentage will need to go up, but Baxter was elated with the number of attempts. He wants layups, free throws and open 3-point shots.

“We’ve taken about five 3-pointers that I didn’t think were good shots, 3-point attempts where it would have been a better idea to feed the post,” Baxter said. “But I like what I’ve seen. We were 11-for-31 from 3 against Erskine, and that’s like shooting better than 50 percent from 2.”

In the North Greenville game, Catawba held the Crusaders to four points in the second quarter with frenzied defense. Catawba didn’t play as well against Erskine, but Baxter said DeShazo took charge vocally and with her play as the Indians pulled away in the second half.

Barnes, who is part of the All-SAC preseason first team, is averaging 11.5 points so far, while averaging 21.5 minutes on the court. She’s quite athletic for a 6-footer and is always a double-double candidate.

In the North Greenville game, all 16 healthy Indians got into the game. Fourteen scored. Against Erskine, 13 played and nine scored.

“Being  so much deeper means a lot more coaching options,” Baxter said. “If someone wasn’t playing well last year, we had to stick with them and let them work it out on the court. Now they if they get in a funk, they can just come sit next to me for a while and let that motivate them to do better.”

Thorne is a key and is expected to be the primary ball handler, taking that burden off Hallman and Stanback. In her first two college starts, she’s averaged 8.0 points while playing 17.5 minutes per game.

“What all our freshmen have to learn is that they can’t relax at this level because everyone is talented,” Baxter said.  “But we have no worries about Lyrik. She’s going to have 30-point games this season.”

Baxter believes the Indians have a serious chance to get back in the regional this season for the first time since 2015. That might take a top-four finish in the SAC. After they add another strong recruiting class — he and his staff have that one well under way — they may be ready to challenge for championships.

Livingstone finally scores at home, but loses to JCSU