Two in one: Legion Auxiliary celebrates 100th anniversary, plus a Salisbury homecoming 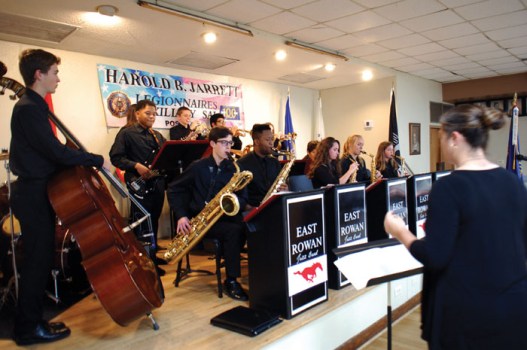 Mark Wineka/Salisbury Post The East Rowan High School Brass Ensemble, under the direction of Emily McNeil, play during the state American Legion Auxiliary's celebration of the national organization's 100th year. The event was held at the Harold B. Jarrett American Legion Post 342 in Salisbury. 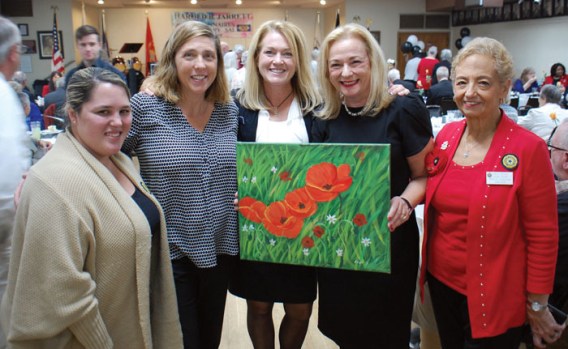 Mark Wineka/Salisbury Post As part of a homecoming present to state Legion Auxiliary President Julie Smith, second from right, members of a Huntersville auxiliary gave her a painting of poppies, the flower identified with the American Legion. 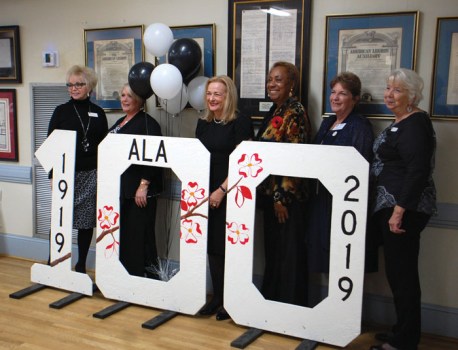 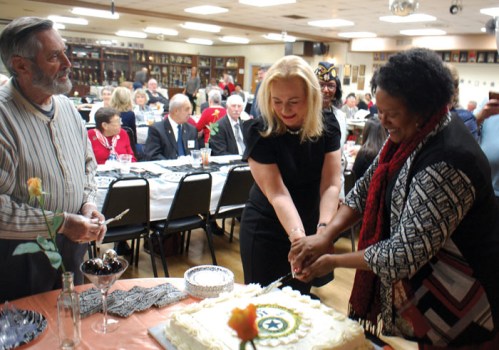 SALISBURY — There were two reasons the Department of North Carolina’s American Legion Auxiliary had a big party in Salisbury on Sunday evening.

First, the members, dignitaries and friends gathered to celebrate the auxiliary’s 100th birthday as a national organization serving military veterans.

Second, the state auxiliary met at Harold B. Jarrett American Legion Post 342 to mark the official homecoming of N.C. President Julie Smith, who lives in Salisbury and also calls the Jarrett post her home unit.

Smith has been state president since June and for months has looked forward to combining her homecoming with the 100th anniversary, which actually was Sunday.

The 5,000-member state auxiliary dates its own beginnings to 1920 and, at present, the North Carolina Department has 161 local units in 15 districts and three divisions.

The national auxiliary as a whole is considered the largest women’s patriotic organization.

Smith said Sunday that will change with a recently passed rule designed to increase membership. It will allow spouses of women auxiliary members to join.

With that, Smith said to applause, the auxiliary will simply become the largest patriotic organization in the world.

Salisbury Mayor Al Heggins, a 19-year Army veteran herself, attended the festivities and proclaimed Sunday to be American Legion Auxiliary Day in the city.

“We’re just so glad to be celebrating 100 years tonight,” Heggins said. “That is fantastic.”

In her proclamation, Heggins noted how nationally the American Legion Auxiliary has put in 15.5 million hours, raised $1 billion and granted millions of dollars in scholarships, all in the service of veterans and their families.

In welcoming the guests to Salisbury, Jarrett Post Commander Charlie Frick said the combination of Smith’s homecoming and the 100th birthday was “a pretty neat thing to have together.”

Frick said it was an honor for the post to host the celebration.

“We are extremely proud and honored to have Julie Smith as state president from our post,” Frick said.

He presented Smith both a plaque in recognition of that position and a check from the Harold B. Jarrett Post toward her President’s Project.

For that project, Smith has set a goal of raising $20,000 to help veterans coping with post-traumatic stress disorder at the four VA hospitals in the state.

Several other people gave her checks Sunday night, including special guest James Moore of Kinston, who is state commander of the American Legion.

Going into Sunday morning, Smith said, the project had collected $11,863, including $5,094 at the state auxiliary’s fall conference alone.

Though it’s not always visible on the outside, PTSD is a real problem, Smith said.

Another Salisbury woman, Lily Burt, a member of the Samuel Hart Post 14 auxiliary, served as the state’s first president (then called commander) from 1920 to 1922.

Burt thought the auxiliary’s overriding duty should be to serve disabled veterans of World War I in the VA hospitals.

“She truly is a woman after my own heart,” Smith said.

Smith’s daughter, Emilee Sidelinker, who also served at the evening’s mistress of ceremonies, is chairwoman of the President’s Project. Emilee’s son and Smith’s grandson, 5-year-old Jayse, led the Pledge of Allegiance.

“I’ve been hearing about this night for a year,” Sidelinker said.

Smith said Sunday was an exciting day in an exciting year for her and the state auxiliary. The organization’s mission will continue to be to advocate, educate, mentor and promote patriotism, Smith said.

A retired history teacher, Smith said a lot of women’s organizations already existed in 1919, and many wanted to join forces with the newly formed American Legion.

But the Legionnaires created a whole new organization of mothers, grandmothers, wives and sisters of veterans from World War I who knew the men best, she said.

While Smith promised the future will hold more changes, she encouraged auxiliary members to confront them with an open mind, open heart and positive attitude, while remaining steadfast as a premier service organization supporting the American Legion.

Frick noted that Sunday also was the 245th birthday of the U.S. Marine Corps.