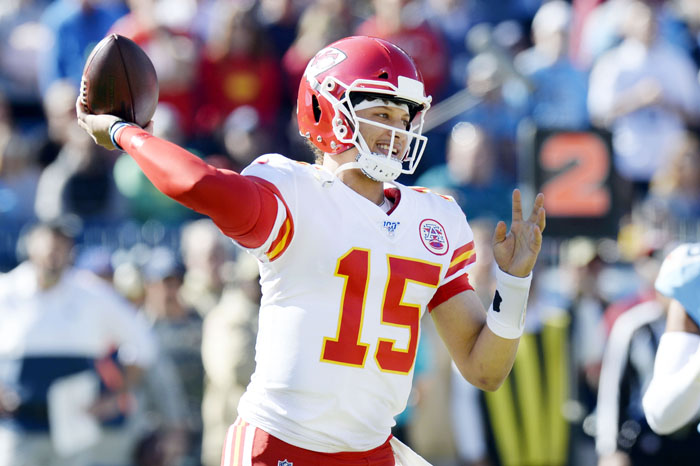 NASHVILLE, Tenn. — Ryan Tannehill threw a 23-yard touchdown to Adam Humphries with 23 seconds left, and the Tennessee Titans blocked a last-second field goal attempt to beat the Kansas City Chiefs 35-32 to spoil the return of NFL MVP Patrick Mahomes.
The Titans (5-5) only had a chance to take the lead after a bad snap by the Chiefs on Harrison Butker’s fifth field goal attempt of the day. The snap caught holder Dustin Colquitt by surprise, and he threw the ball away in desperation for an intentional grounding call, setting the Titans up at their own 39.
Tannehill scrambled for 18, hit Anthony Firsker for 20 yards and then found Humphries who ran in for the TD. Tannehill also ran for the 2-point conversion for a 35-32 lead.
The Chiefs (6-4) had a final chance with Mahomes. He drove them down, setting up Butker for another field goal try from 52 yards.
Joshua Kalu blocked the kick with his left hand, and the Titans poured onto the field to celebrate.
Derrick Henry ran for 188 yards, including a 68-yard TD that put Tennessee up 20-19 with 5:58 left in the third. His 1-yard TD with 6:26 remaining pulled the Titans within 29-27.
Tannehill finished with 181 yards passing and ran for 37 yards for the win.
The loss spoiled the best passing game this season for Mahomes as the Chiefs outgained the Titans 530-371. Mahomes threw for 446 yards and three touchdowns. His best play came with the pocket collapsing around him when he jumped up to throw over the linemen to Mecole Hardman who ran for a 63-yard TD with 11:54 left and a 29-20 lead.
Mahomes looked very healthy playing for the first time since dislocating his right kneecap Oct. 17. He got lucky when his first pass first ruled an interception was overturned by replay for Titans safety Kenny Vaccaro trapping the ball on the ground. Mahomes capped the Chiefs’ first drive with a 3-yard shovel pass to Travis Kelce.

FALCONS 26, SAINTS 9
NEW ORLEANS — Matt Ryan passed for two touchdowns and Atlanta ended its six-game slide with a victory over the Saints that stopped New Orleans’ six-game winning streak.
Atlanta’s defense stunningly dominated New Orleans’ normally stout offensive line. Coming in with an NFL low seven sacks all season, the Falcons sacked Drew Brees six times, with Grady Jarrett, Vic Beasley Jr., Adrian Clayborn and De’Vondre Campbell all getting involved. Jarrett finished with a team-high 2½ sacks.
It was the second time this season the Saints were held without a touchdown at home, but the first time with Brees under center. New Orleans also failed to score a TD in a 12-10 victory over Dallas in Week 4 with Teddy Bridgewater filling in at quarterback.
Ryan, returning from an ankle injury that sidelined him in the game before the Falcons’ Week 9 bye, was 20 of 35 for 182 yards.
His first touchdown went for 8 yards to tight end Austin Hooper in the second quarter and his second to running back Brian Hill in the fourth quarter to put Atlanta in front 20-9.

BROWNS 19, BILLS 16
CLEVELAND — Baker Mayfield threw a 7-yard touchdown pass to Rashard Higgins with 1:44 left and Cleveland Browns snapped a four-game losing streak — and took some pressure off first-year coach Freddie Kitchens — with a win over Buffalo.
The Browns (3-6) rallied for a win that kept their season from completely collapsing.
Cleveland survived more problems in the red zone but sealed the much-needed win when Buffalo kicker Stephen Hauschka’s 53-yard field-goal attempt was short with 22 seconds left. Earlier, Hauschka missed a 34-yarder.
Quarterback Josh Allen had two touchdown runs for the Bills (6-3), who were off to their best start since 1993.
Mayfield finally delivered a clutch drive after Allen’s 1-yard sneak put the Bills ahead 16-12.

RAVENS 49, BENGALS 13
CINCINNATI — Lamar Jackson threw for three touchdowns in a near-perfect passing performance and added a sensational 47-yard scoring run, Marcus Peters got his third pick-6 of the season — this one off rookie Ryan Finley — and Baltimore won its fifth in a row, routing winless Cincinnati.
The Ravens (7-2) followed their eye-opening victory over the previously unbeaten Patriots by quickly pulling away from the NFL’s last winless team.
It was the Lamar Jackson show from the start — a 49-yard completion on his first throw. His only incompletion in the first half was on a spike.
Jackson finished 15 of 17 — a club-record completion percentage — for 223 yards and a perfect passer rating of 158.3, his second of the season. Jackson threw five TD passes and had a perfect rating during a 59-10 opening win over the Dolphins.
In the third quarter, Jackson pulled off a 360-degree spin move during his 47-yard touchdown run, among the best in his growing highlight reel of dashing past befuddled defenders. Then, Jackson stood in against a blitz for a 20-yard touchdown pass that made it 42-10.
With their dual-threat quarterback taking the lead, the AFC North leaders have won five in a row for the first time since 2013.

STEELERS 17, RAMS 12
PITTSBURGH — The Steelers forced four turnovers — including a 43-yard fumble return for a touchdown by safety Minkah Fitzpatrick — in an ugly victory that pushed their winning streak to four games and dealt the Rams’ chances of chasing down Seattle and San Francisco in the NFC West a serious blow.
Aaron Donald, a Pittsburgh native, sacked the Steelers’ Mason Rudolph for a safety in his first appearance in his hometown since the Rams took him in the first round of the 2014 draft.
Linebacker Dante Fowler scored Los Angeles’ lone touchdown on a 26-yard fumble return on the second snap of the game. But the Rams’ offense did little against a Steelers defense that has become the team’s identity after losing Ben Roethlisberger to a season-ending right elbow injury in Week 2.
Jared Goff completed 22 of 40 passes for 243 yards, none of them to leading receiver Cooper Kupp. The Rams (5-4) converted just 1 of 14 third downs and came up empty on a pair of last-gasp drives in the final two minutes. Goff’s fourth-down heave to the end zone intended for Josh Reynolds fell incomplete with 1:25 to go. Los Angeles got the ball back with 59 seconds to play but Goff’s pass to Robert Woods was tipped.
Fitzpatrick ran underneath it for the game-sealing interception and seventh takeaway since the Steelers acquired him from Miami in September for a 2020 first-round pick.
Rudolph completed 22 of 38 passes for 242 yards with a touchdown, stats that would have been considerably better if not for a handful of drops that prevented the Steelers (5-4) from gaining any sort of traction for long stretches.

BEARS 20, LIONS 13
CHICAGO — Mitchell Trubisky tied a season high with three touchdown passes, and the Chicago Bears withstood a late charge by Detroit with Jeff Driskel filling in for injured quarterback Matthew Stafford, beating the Lions 20-13 on Sunday to snap a four-game losing streak.
Detroit ruled out the 31-year-old Stafford hours before kickoff because of hip and back injuries, ending his streak of 136 consecutive starts. It was the first time he missed a regular-season game since 2010.
Chicago (4-5) got its struggling offense going late in the first half, scored two touchdowns early in the third quarter and hung on to win for the first time since beating Minnesota in Week 4. Detroit (3-5-1) lost for the fifth time in six games.
Driskel threw a 47-yard touchdown pass to Kenny Golloday with 5:53 remaining to cut it to 20-13. He led Detroit from its own 10 to the Chicago 25 on the game’s final drive. But with the ball on 25, he overthrew Marvin Jones Jr. in the end zone as time expired on a play that would not have counted because of an illegal forward pass penalty.
Trubisky completed 16 of 23 passes in another solid outing against Detroit. It wasn’t as good as his performance against the Lions last year in a win at Soldier Field, when the No. 2 overall pick in the 2017 draft threw for 355 yards and three touchdowns. But it was a positive step for the struggling quarterback.
Taylor Gabriel, Tarik Cohen and Ben Braunecker each caught touchdowns. Nick Kwiatkoski set up a TD with an interception.

BUCCANEERS 30, CARDINALS 27
TAMPA, Fla. — Jameis Winston threw for 358 yards and one touchdown, helping Tampa Bay rally to snap a four-game losing streak with a victory over Arizona.
Matt Gay kicked three field goals and Peyton Barber scored on a 1-yard run to finish a 92-yard, game-winning drive Winston put together after the Bucs (3-6) ended Kyler Murray’s NFL rookie record streak of 211 consecutive pass attempts without an interception.
Barber’s TD with less than two minutes left was set up by a booth review that determined Cardinals safety Jalen Thompson committed pass interference against Mike Evans in the end zone, giving Tampa Bay a first down at the Arizona 1.
Murray threw for 324 yards and three TDs to Christian Kirk, whose 15-yard scoring reception put the Cardinals up 27-23 midway through the fourth quarter. Kirk also scored on receptions of 33 and 69 yards and finished with six catches for 138 yards for Arizona (3-6-1).

JETS 34, GIANTS 27
EAST RUTHERFORD, N.J. — Le’Veon Bell scored a go-ahead 1-yard touchdown early in the fourth quarter after a 33-yard pass interference penalty on DeAndre Baker, and the Jets rallied and then held on to beat the Giants for Big Apple bragging rights.
Sam Darnold threw a touchdown pass to Jamison Crowder and ran for another score, and Jamal Adams scored on a 25-yard fumble return on a strip-sack as the Jets (2-7) bounced back from an embarrassing 28-16 loss last week at previously winless Miami.
Daniel Jones threw a career-high four touchdown passes, two each to Darius Slayton and Golden Tate, but couldn’t prevent the Giants (2-8) from losing their sixth straight game. It’s their first six-game skid since 2014.
Saquon Barkley had the worst game of his young career, finishing with just 1 yard on 13 carries. He also had five catches for 30 yards.
With the Giants trailing 21-19 in the third quarter, Jones marched them down the field on nine plays over 69 yards, capped by a 15-yard touchdown pass to Tate.

DOLPHINS 16, COLTS 12
INDIANAPOLIS — Ryan Fitzpatrick scored on an 11-yard run in the first half and Miami made a late stop to preserve a victory over Indianapolis.
The Dolphins (2-7) have won two straight after a miserable start and earned their first win at Lucas Oil Stadium since 2013.
Indianapolis (5-4) has lost back-to-back regular-season games for the first time since October 2018. With starting quarterback Jacoby Brissett out because of an injured left knee, the Colts offense sputtered. Indy gained just 300 yards and Brian Hoyer was picked off three times, with Miami scoring 13 points off those turnovers.
Yet, the Colts had four chances to take the lead in the final minute from the Miami 16. Hoyer threw incompletions on the first three plays and hooked up with Eric Ebron for eight yards on fourth-and-10, sealing the decision.
___
More AP NFL: https://apnews.com/NFL and https://twitter.com/AP_NFL