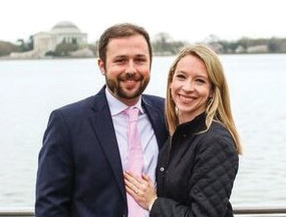 Dr. and Mrs. James Kaufmann of Salisbury are pleased to announce the engagement of their daughter, Margaret Elizabeth, to Greyson Laney Gordon, son of Mr. and Mrs. Darrell Gordon of Raleigh.

A 2011 graduate of Salisbury High School, Margaret graduated from Davidson College in 2015 with a Bachelor of Arts in Political Science.  She is employed by JLL.

A 2011 graduate of Broughton High School, Grey graduated from Davidson College in 2015 with a Bachelor of Arts in Economics.  He is a graduate student at the University of North Carolina Kenan-Flagler School of Business.

A May 30, 2020 wedding is planned at St. Luke’s Episcopal Church in Salisbury.