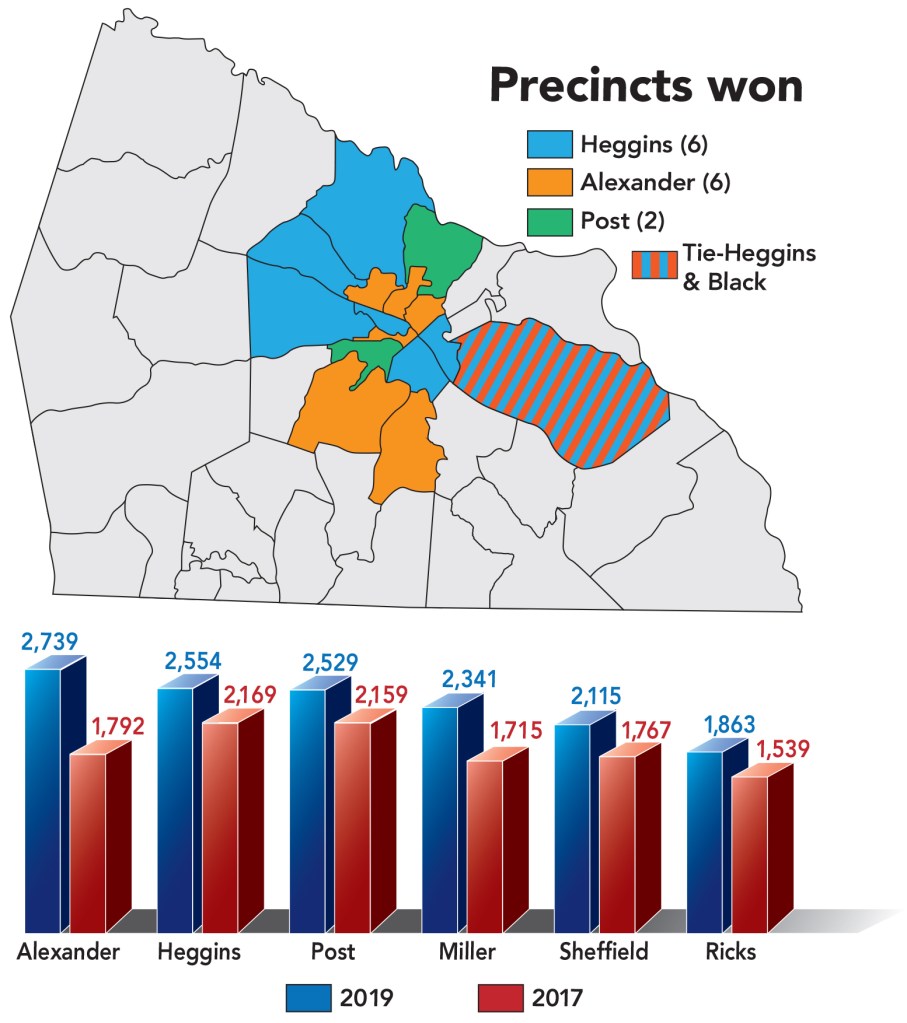 SALISBURY — The 2019-21 Salisbury City Council will have the same five members, but the seats will be different when they’re sworn in next month.

Karen Alexander, who was mayor from 2015 to 2017, will return to the center seat if her fellow council members hold to tradition of choosing the highest vote-getter in the council election as mayor.

Sumner had the lowest turnout at 8.68%, or 56 votes. In the Franklin precinct, five people voted of the 33 who are registered. In North Lock, 26 of the 319 registered voters cast ballots. Ellis had a turnout of 14 out of 72.

Current Mayor Al Heggins picked up 385 votes over her 2017 total. She saw only a slight decrease in votes in one precinct, Ellis. She received 15.5% of her votes in South Ward.

Heggins lives in the West Ward 3 precinct, where she got 248 votes. That compares to 86 for Alexander and 96 for David Post. West Ward 3 is predominately black and has about 2,500 registered voters. Candidate Gemale Black, who finished seventh overall, also performed well in West Ward 3, getting 178 votes.

Mayor Pro Tem David Post increased his vote total by 370 over 2017; Councilman Brian Miller got an extra 628 votes; and Councilwoman Tamara Sheffield increased her total by 348.

As he did in 2017, Miller pulled in the greatest portion of his votes in North Ward precinct, with 429 votes.

Post led all candidates in West Ward 2, with 300 votes.

Post and Miller live in the West Innes precinct.

Sheffield lives in West Ward 2, but received a plurality of her votes in North Ward.

Giannina Monzon, a newcomer to politics, received 1,076 votes, or 5.93%. She set up a booth at the one-stop voting site at West End Plaza throughout the early-voting period. And she picked up 497 votes during early voting.

Ladale Benson, who discontinued his campaign, received 235 votes, or 1.3%.

Some votes are still to be counted, according to Rowan County Elections Director Brenda McCubbins, including seven provisional ballots and 10 absentee ballots for the Salisbury City Council race.

Absentee ballots must have been postmarked by Election Day. Across the county, there are at least 14 absentee ballots and 34 provisionals outstanding, with 13 likely to be approved.

The Board of Elections has not yet certified the results of the election, so the numbers remain unofficial for another week as the board conducts a canvass.

McCubbins said, judging the unofficial totals, no results in Rowan County are close enough to allow a recount.

In 2017, the top vote-getters — Heggins and Post — were 10 votes apart. Post chose not to call for a recount, leaving Heggins as the top vote getter with 2,169.