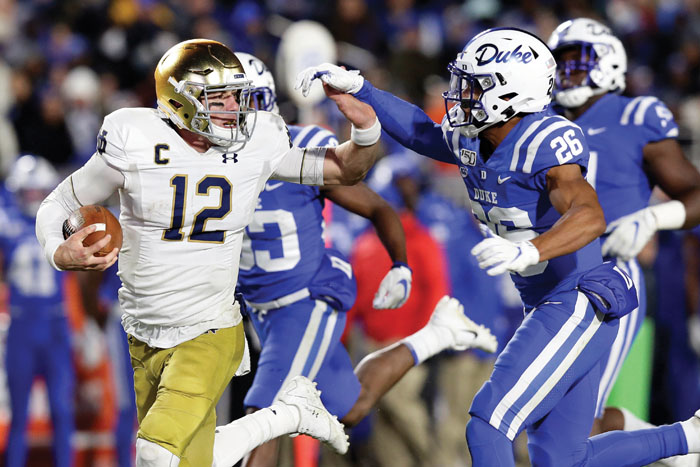 By JOEDY McCREARY AP Sports Writer
DURHAM (AP) — Ian Book trusted his legs to pick up chunks of yardage for No. 15 Notre Dame. The touchdowns came from his arm.
Book rushed for a career-best 139 yards and threw four touchdown passes and the Fighting Irish routed Duke 38-7 on Saturday night.
Book finished 18 of 32 for 181 yards passing, Chris Finke caught touchdown passes of 18 and 6 yards, and Chase Claypool and George Takacs also had short scoring catches.
C’Bo Flemister rushed 2 yards for a TD for the Fighting Irish (7-2, No. 15 CFP). In winning their second straight and fifth in six games, they rolled up 469 total yards, led 21-0 before the Blue Devils picked up their second first down and kept them at bay the rest of the way.
“It’s hard to win in November,” Book said. “You want to win every single game in November. It’s huge. … We’re still playing for a lot of things here.”
Book became the first Notre Dame quarterback with 100 yards both rushing and passing since Brandon Wimbush did it two years ago against Wake Forest.
“He’s just a heck of a football player,” Duke coach David Cutcliffe said.
Book has accounted for seven touchdowns in his last two games, both victories over Atlantic Coast Conference schools. He threw for two TDs last week against Virginia Tech, then rushed for the winning score with 29 seconds left to beat the Hokies.
The Blue Devils kept him from crossing the goal line in this one, prompting Book to quip that “I need to get faster.
“I need to get in the end zone,” he said. “I’m kind of upset about it. But fast DBs, they caught me. … I was able to get the first downs … but I want to get in the end zone.”
Quentin Harris was 16 of 28 for 102 yards for Duke (4-5) with a 29-yard touchdown pass to Aaron Young late in the second quarter. The Blue Devils have lost three straight and four of five since starting 3-1.
THE TAKEAWAY
Notre Dame: The Fighting Irish rushed for 288 yards — their best game on the ground in a month — against a decent Duke run defense, and 148 of those yards came on three carries, runs of 45 and 53 yards by Book and a 40-yarder by Jahmir Smith. Both co-starters — Tony Jones Jr. and Jafar Armstrong — were back, but they combined for just 27 yards on 10 attempts.
Duke: The Blue Devils have played three 2018 College Football Playoff programs in 12 months — Clemson last November, and Alabama and now Notre Dame this season — and lost them all by a combined 108-16, failing to reach double-figure scoring in any of them. This loss puts Duke in bowl jeopardy: The Blue Devils must win two of their final three — against Syracuse, No. 22 Wake Forest and resurgent Miami — to reach their third straight bowl game.
“I’m concerned with where we are with a rhythm” on offense, Cutcliffe said. “We’ve got an approach where we’re going to work like we’ve always worked, but I think a study of what we’re doing right now is real important. … You don’t panic. … We’ve got three big football games in front of us that we can go win.”
POLL IMPLICATIONS
While the Irish certainly have a case to climb a bit higher in the polls, it could work against them that the teams ranked alongside them in the mid-teens lost this week.
BOOKING IT
Book had 86 yards rushing by halftime, surpassing his previous single-game best of 81 set in the opener at Louisville. He gained more yards on one rush — covering 45 yards in the second quarter — than the Blue Devils’ entire offense had to that point (36), then went for 53 yards in the first minute of the fourth quarter that set up Jonathan Doerer’s 43-yard field goal.
TURNING POINT
Duke missed on a couple of chances to make it a one-score game, first squandering Shaka Heyward’s interception of Book’s pass late in the second quarter when the drive stalled at the Irish 26 and AJ Reed pushed a 44-yard kick wide right. Then, the Blue Devils’ first drive of the second half ended when Troy Pride Jr. intercepted Harris’ pass for Scott Bracey and Notre Dame turned that takeaway into Book’s second scoring pass to Finck.
UP NEXT
Notre Dame: Plays host to No. 25 Navy on Saturday.
Duke: Plays host to Syracuse on Saturday.
___
More AP college football: https://apnews.com/APTop25CollegeFootballPoll and https://apnews.com/Collegefootball and https://twitter.com/AP_Top25