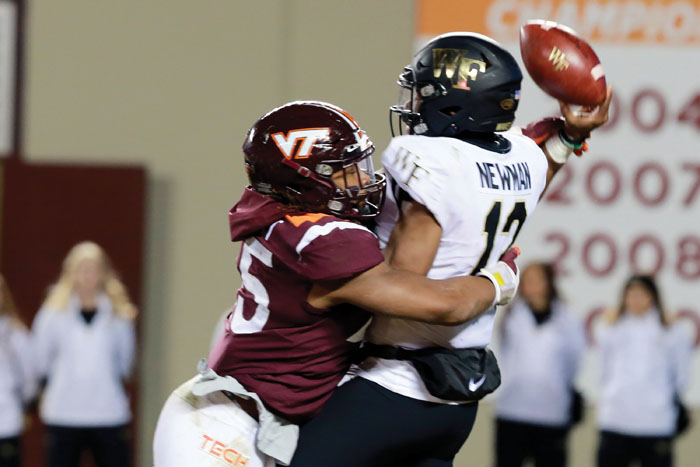 BLACKSBURG, Va. (AP) — Hendon Hooker accounted for 311 yards of total offense and ran for a touchdown to help Virginia Tech beat No. 22 Wake Forest 36-17 on Saturday.

“It was fun to be a part of,” Tech coach Justin Fuente said. “I go back to this — I’m really proud of our kids. They just continue to battle and block out the noise and work hard and stick together, and it’s fun to get to see them reap some benefits.”

Deshawn McClease scored touchdowns on back-to-back possessions in the third quarter. His 6-yard touchdown run with 7:02 remaining in the quarter gave the Hokies a 20-17 lead — one they never would relinquish. He had 59 of the Hokies’ 228 yards rushing.

“Honestly, it (the first half) was me,” Hooker said. “It was my fault. I told the offense, ‘I take full responsibility in us not getting in the box (end zone).’ Just coming out, I told them, ‘You guys got my back. I got your back, so (let’s) make it happen.’”

“They probably covered us the best a team has covered us all year,” Wake Forest coach Dave Clawson said. “We didn’t get a lot of separation. We were off in the passing game.”

Wake Forest: The Demon Deacons are going to have to find a way to run better to keep their defense off the field — they finished with 63 yards rushing against the Hokies. Finding that running game won’t be easy next Saturday with a trip to unbeaten and No. 4 Clemson looming.

Virginia Tech: The Hokies control their destiny in the ACC’s Coastal Division race and need just one victory in their final three games to become bowl eligible for the 27th consecutive season. Two of their wins this season have come against FCS opponents, which means the Hokies need to get to seven victories to extend the nation’s longest active bowl streak.

MINNEAPOLIS (AP) — Minnesota’s Jordan Howden picked off Sean Clifford’s pass in the end zone with 1:01 left, the third interception thrown by Penn State’s quarterback, and the Gophers beat the Nittany Lions for their first victory over a top-five team in 20 years.

Tanner Morgan passed for 339 yards and three touchdowns to direct a dismantling of Penn State’s staunch defense. Minnesota (9-0, 6-0, No. 17 CFP) not only remained undefeated, but stayed on track for its first trip to the Big Ten championship game.

The first sellout crowd for the Gophers at home in four years swarmed the field after the clock ran out, reveling in the biggest step forward yet under coach P.J. Fleck in his third season. The Gophers scrambled the College Football Playoff picture, too, after Penn State (8-1, 5-1, No. 4 CFP) emerged with a top-four spot in the first edition of the rankings.

A team that gave the Buckeyes (9-0, 6-0 Big Ten, CFP No. 1) headaches last season was no trouble this time, even without the fierce pass rushing of Young. The preseason All-American was suspended Friday while Ohio State investigates a possible NCAA violation involving a loan.

FORT WORTH, Texas (AP) — Denzel Mims made a leaping 4-yard touchdown catch in the third overtime for Baylor, capping another comeback victory that kept the Bears undefeated.

Charlie Brewer also threw a 20-yard touchdown pass to Mims on fourth down in the second overtime to extend the game. Brewer had a 3-yard scoring run in the first overtime.

The Mustangs (9-1, 5-1 American Athletic) played from ahead and kept it that way in a second straight game with more than 1,000 combined yards. SMU had fallen behind and failed to close the gap last week in a 54-48 loss to No. 19 Memphis.

Buechele threw for 414 yards as the Mustangs finished with 636 total yards to 644 for the Pirates (3-7, 0-6). Kylen Granson caught three touchdowns passes, including a 31-yarder on fourth-and-20 with SMU leading 45-44 midway through the fourth quarter. Granson had 138 yards on seven receptions, and James Proche finished with 14 catches for 167 yards.

REYNOLDS DOES IT AGAIN: CHARLOTTE 28, UTEP 21

EL PASO, Texas (AP) — Chris Reynolds (Davie County) threw for a career-high 354 yards and two touchdowns and added 91 yards rushing to help Charlotte beat UTEP 28-21 on Saturday as the 49ers got their first road win of the season.

Charlotte trailed 21-7 at halftime before scoring 14 points in the third quarter and Jacob Hunt capped the scoring midway through the fourth with a 19-yard touchdown grab on fourth-and-1. Henry Segura sealed it with an interception with 1:03 remaining.

Charlotte (5-5, 3-3 Conference USA) tied a program record for wins in a season after its third straight victory. Reynolds, whose previous best was 336 yards, was 10-of-14 passing in the first half for 141 yards.

The senior quarterback threw for one touchdown and ran for another as the Cavaliers shut down Georgia Tech after halftime in a 33-28 victory Saturday.

Perkins completed 24 of 35 attempts and hit six different receivers, led by Terrell Jana with nine catches for 108 yards. Jana caught 13 passes for 146 yards a week ago in a victory against North Carolina, giving him 22 receptions in two weeks after he’d managed only 31 in the first eight games.

BOSTON (AP) — D.J. Matthews caught a short pass, faked out three defenders on his way to the sideline and then dove for the end zone, taking off from the 6-yard line before clipping the pylon to give Florida State the go-ahead score.

“It kind of reminded me of high school, doing the long jump,” Matthews said after helping the Seminoles beat Boston College 38-31 on Saturday in their first game since coach Willie Taggart was fired.

Matthews turned a short slant pattern into a 60-yard touchdown to break a fourth-quarter tie, and Jordan Travis followed with a 66-yard run for what turned out to be the winning score for Florida State (5-5, 4-4 Atlantic Coast Conference).

He thought about it for a few seconds before settling on “kind of a free throw shot.” If so, his last two scores were breakaways dunks.

Trask threw for a career-high 363 yards and three touchdowns — the best passing performance by a Florida quarterback since Tim Tebow’s college finale — and the 10th-ranked Gators overcame a lackluster start to thump Vanderbilt 56-0 Saturday.

COLUMBIA, S.C. (AP) — Zac Thomas ran for a touchdown and Nicholas Ross scored on a 20-yard interception return as Appalachian State beat its second Power Five program of the season — and first from the Southeastern Conference — with a 20-15 victory over South Carolina on Saturday night.

The Mountaineers (8-1) were ranked No. 20 and undefeated with a chance to play in the Cotton Bowl before last week’s 24-21 home loss to Georgia Southern. They bounced back in the best way possible, holding off a late rally by South Carolina and adding this Power Five takedown to their 34-31 victory at North Carolina on Sept. 21.

Bryan Edwards had a 23-yard touchdown catch to draw the Gamecocks (4-6) within five with three minutes left. The Gamecocks drove to the App State 9 with 11 seconds left. But after a South Carolina holding penalty, Hilinski’s pass to the end zone was long in Appalachian State’s latest landmark victory.

As the Mountaineers did after stunning fourth-ranked Michigan in 2007 and the Tar Heels back in September, they rushed the field in celebration.

South Carolina’s chances of making a bowl took a serious hit. The Gamecocks now must win at Texas A&M (something they’ve never done) and No. 4 Clemson in their final two games to make their fourth postseason trip under coach Will Muschamp.

Things turned right before halftime when Hilinski’s hard throw over the middle bounced off Xavier Legette’s hands and was intercepted by safety Nicholas Ross and returned 20 yards for a touchdown to put Appalachian State ahead for good 13-6.

Hilinski, the Gamecocks freshman, had not thrown a pick in his past five games until Ross got the deflected ball and took it in for the score.

Appalachian State defense took away what was expected to be the Gamecocks biggest edge in the run game. Season starter Rico Dowdle, who had missed the previous two games with an ankle sprain, had zero yards on 10 first-half carries in his return.

The Gamecocks came in averaging 184 yards a game on the ground but gained just 21 on 27 carries. South Carolina played without leading rusher Tavien Feaster, who sustained a groin injury last week.

South Carolina: Muschamp had touted this as his deepest, most talented group this summer. But the Gamecocks continue to confound as they struggled to make plays on both sides of the ball. It was the third time in four games, South Carolina was outplayed in the second half of losses with a chance to win the game. Florida outscored the Gamecocks in the fourth quarter while Tennessee had a 24-0 advantage in the second half. Add the Mountaineers to the list.