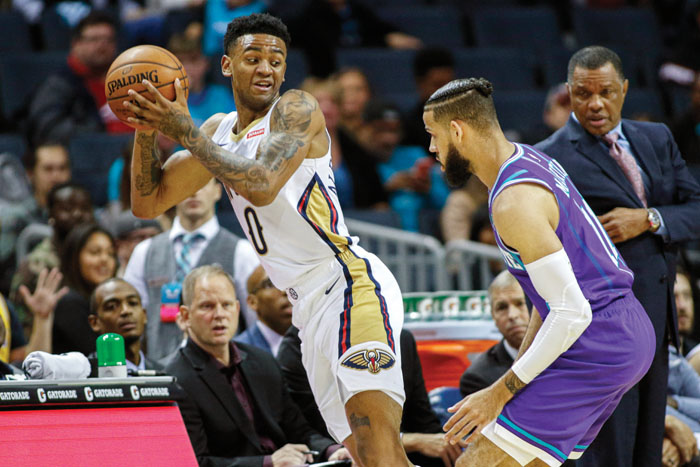 By STEVE REED AP Sports Writer
CHARLOTTE (AP) — Pelicans coach Alvin Gentry could only manage a sarcastic grin after his team’s second win of the season.
He knows it wasn’t pretty.
“Well, I don’t think they’re sending that (game tape) to Springfield anytime soon,” Gentry said, referring to the Basketball Hall of Fame.
Brandon Ingram had 25 points and nine rebounds, and New Orleans overcame 26 turnovers to beat the Charlotte Hornets 115-110 on Saturday night. Charlotte had 22 turnovers, making for a sloppy game all around that lacked any type of flow until the final minutes.
JJ Redick, who replaced the injured Lonzo Ball in the starting lineup, had 22 points on five 3-pointers and Jrue Holiday added 12 points and 11 assists for the Pelicans (2-7).
Ball sat out with a right abductor sprain.
“I just thought we turned the ball over way too much, we’ve just got to get better in that department right there. And they’re careless turnovers,” Gentry said. “… We grinded it out and found a way to win and to me that’s the most important thing.”
Despite the ugly win, it was another solid performance for Ingram, who was born and raised in Kinston, North Carolina.
He finished 8 of 12 from the field and had 10 points in the fourth quarter, helping the Pelicans seize the momentum while the Hornets went cold down the stretch, going 3 ½ minutes during one stretch without a point.
“I mean B.I. is a baller, that’s our go-to guy, him and Jrue down the stretch we want to get the ball in their hands and just let them make plays even for themselves or for other people,” said Pelicans forward Kenrick Williams.
Hornets coach James Borrego wasn’t pleased with his team’s performance, either.
“It’s sloppy execution, it’s not taking pride in making the right play or pass,” Borrego said.
With the game tied at 95 with five minutes left, Josh Hart knocked down a go-ahead 3 igniting an 11-2 run that figured to be the difference in the game. Hart had 10 points and seven rebounds coming off the bench.
GRAHAM KEEPS ROLLING
Backup point guard Devonte Graham led the Hornets with 24 points and 10 rebounds.
Graham entered the game ranked third among all bench players in the league with seven assists per game. But the second-year player from Kansas was more concerned about the overall sloppy play, saying “we talk about it all the time, you’ve got to limit the turnovers. We did a good job of that the last couple of games, but this game we were a little lazy with the ball.”
REDICK SHINES
The Pelicans were able to get Redick involved in the offense, and he looked just as confident as ever shooting the 3.
“For the first time this season I feel like we were able to free JJ up for some good looks that he didn’t really try to have to force up,” Gentry said. “We did a good job early on with the pace of the game and we got him into a situation where we were able to drive and kick and have him have some good looks and he took advantage of it I thought.”
TIP INS
Pelicans: There were dozens of fans in the crowd with Zion Williamson jerseys, although the No. 1 overall pick remains out of action recovering from a knee injury. … In the something-you-don’t-see every day category, Nicolo Melli was originally credited with a 3-pointer in the second quarter, but when officials went back to review the play they realized he had stepped out of bounds and the basket was taken away.
Hornets: Malik Monk showed his athleticism when he skied high above Josh Hart and threw down a one-handed dunk off an alley-oop pass from Devonte Graham. … Rookie P.J. Washington missed a good chunk of the game with an ankle injury but did return.
UP NEXT
Pelicans: Return home to host the Rockets on Monday, beginning a stretch of four of five games at home.
Hornets: Travel to Philadelphia on Sunday in their only away game in a stretch of six home games. “We’ve got to do better to close out games, obviously, so I think that’s one thing we’ve got to work on” Sunday, Washington said.
___
More AP NBA: https://apnews.com/NBA and https://twitter.com/AP_Sports

Burrow, LSU hold on for crazy win over Alabama