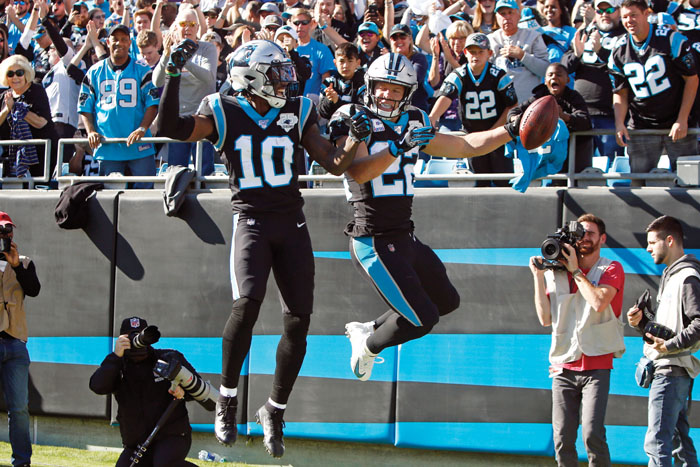 GREEN BAY, Wis. (AP) — Aaron Rodgers couldn’t quite put his finger on it, but the two-time MVP knew something was missing last Sunday.

Rodgers was sacked three times, and the Green Bay Packers’ offense had its most anemic performance under coach Matt LaFleur in a 26-11 loss to the Los Angeles Chargers.

“It was such a different feeling,” said Rodgers, who was held to a career-low 61 yards through the first three quarters. “We just didn’t have that normal juice. … I’m not calling anybody specifically out, I’m just saying there was obviously something that threw us off a little bit energetically.”

Green Bay (7-2) will look to bounce back Sunday when it hosts the Carolina Panthers (5-3), a team the Packers have scored 30-plus points against in five of the six games they’ve played at Lambeau Field.

Rodgers will have his top target, Davante Adams, for the second straight game. The two-time Pro Bowl receiver continues to work his way back to full strength after missing four games with turf toe.

“They’ve been able to move the ball since I’ve been out, so the focus shouldn’t change on how we’re trying to do things,” said Adams, who had a team-high seven catches for 41 yards against the Chargers. “Obviously, me being a big part of the offense, I’m going to get my looks here and there and I’m going to do what I can with that and make the biggest impact I can for the team. It’s not about me being back, so nothing should change as far as how we’re trying to beat teams. It’s not going to be some crazy air attack and have 15 targets every game.”

Carolina is Kyle Allen’s team now that Cam Newton has been placed on injured reserve with a nagging foot injury. The former undrafted rookie has done an admirable job in Newton’s absence, going 5-1 as a starter. With Newton out for the rest of the regular season, Allen doesn’t have the pressure of wondering when he will be replaced. Panthers coach Ron Rivera said that might be good for the second-year quarterback.

“I do think as a player it will help him,” Rivera said. “It’s one of those things where you don’t have to worry, ‘Hey, if I don’t play well back-to-back, something is going to happen immediately.’”

Christian McCaffrey is playing like an MVP candidate, leading the league in yards from scrimmage (1,244), touchdowns (13) and a number of other categories. McCaffrey has been finding the end zone with great frequency of late, with nine scores in the last four games.

McCaffrey is a nightmare of a matchup for a Packers’ leaky run defense that has allowed the third-most rushing yards (1,036), second-most touchdowns (10) and fifth-most receptions to the running back position this season. After nine games, Green Bay is allowing the ninth-most rushing yards per game and eighth-highest per carry average.

McCaffrey had 136 total yards and caught a touchdown pass when the Panthers defeated the Packers two seasons ago.

Green Bay will get some help defensively on Sunday. The Packers activated safety Ibraheim Campbell from the reserve/physically unable to perform list. Campbell played in three games for Green Bay last season, including one start, and had 18 tackles (15 solo) and a forced fumble in 112 defensive snaps.

“I’ve been preparing as well as I possibly could up to this point. so I fully anticipate going out there and playing well,” Campbell said. “This is the opportunity I’ve been waiting for, so I plan on taking advantage of it.”

It’s worth keeping an eye on Panthers cornerback James Bradberry and whether a groin injury is enough to keep him out Sunday or affect his high level of play. Bradberry has earned a reputation as one of the game’s best cover men and is having an All-Pro type season. If he doesn’t play against Rodgers, it would be a huge blow for the Panthers’ defense. Veteran Ross Cockrell would fill in.

On the flip side, the Panthers are expected to get defensive end Mario Addison (6½ sacks) back this week after he missed last Sunday’s game following the fatal shooting of his brother.

“I think for me, I think the best thing for him is to get back to work, get around the guys and try to keep your mind off it as best you can,” outside linebacker Bruce Irvin said.

Carolina leads the NFL in sacks with 34.

CHIEFS’ MAHOMES TO START AGAINST TITANS

KANSAS CITY, Mo. (AP) — Patrick Mahomes will start for the Kansas City Chiefs against the Tennessee Titans on Sunday, just over two weeks after the quarterback’s season was jeopardized by a dislocated kneecap.

Mahomes never missed a practice after hurting his knee on a Thursday night against Denver, even though some thought the seriousness of the injury could sideline the league MVP for months.

But it turned out there was no structural damage, and it became a waiting game to see when Mahomes would return. He practiced on a limited basis the first week before being ruled out against Green Bay, then was limited again last week before being inactive against Minnesota.

“We knew how we’ve been doing the whole process of the injury,” Mahomes said after Friday’s practice. “I knew I had a chance once I talked to all those doctors, and they said that as long as I was functioning well, moving well, that I could play this week.”

Matt Moore started the past two games for Kansas City. The journeyman had been coaching high school football when the Chiefs lost backup Chad Henne to a broken ankle in the preseason and gave him a call. Moore wound up playing solidly in losing to the Packers and beating the Vikings.

His performances, along with improved play from the defensed, helped to keep the Chiefs (6-3) atop the AFC West and in the hunt for a first-round playoff bye while Mahomes was out.

“Unless something happens here, he’ll be the guy that plays,” Reid said of Mahomes, who had been eager to play. “You can go whatever direction you want to go with it. I’m going to see after this practice, but right now, that’s what it looks like.”

Mahomes has thrown for 2,180 yards with 15 touchdowns and one interception through six-plus games, building on his record-setting debut as the starter. Even after missing more than two games, Mahomes is tied for seventh in the league in TD passes and is second in quarterback rating.

His injury occurred on the most innocuous of plays.

The Chiefs were deep in Denver territory and facing fourth-and-short, and Reid called for a sneak. Mahomes plunged forward and easily picked up the first down, but as body after body came off the pile, the young quarterback was left on the turf clutching his right knee.

Doctors and trainers rushed onto the field, and television cameras showed one of the physicians jerk the kneecap back into place. Mahomes then limped off the field and straight to the locker room.

“I just knew I couldn’t straighten my leg,” Mahomes said. “The doctors came out and put it back in, and I took those first few steps. I was gingerly walking, but then I realized I didn’t really have much pain at all, if any, so I walked off the field and got the exams.”

Mahomes had X-rays taken at the field that confirmed the dislocation. But the Chiefs didn’t know Mahomes had escaped potentially serious damage to tendons and ligaments until the following day in Kansas City. Head trainer Rick Burkholder said an MRI exam was “as good as we can possibly imagine,” and Chiefs officials hoped Mahomes would return before their bye week.

After visiting Tennessee on Sunday, they head to Mexico City to face the Chargers the following week, before finally getting their bye. That would give Mahomes two weeks to test out his knee, then a much-needed week off to rest and recover before the final stretch.

“It was kind of a fluke thing,” said Mahomes, who will be wearing a brace on the right knee. “I guess I’ll always be a tad higher (risk of dislocating it) than the regular person, but whenever you’re on that football field, there’s always a chance of injury. As long as I’m functioning, I’m moving around the right way, I can go out and play.”

The Chiefs are poised to be as healthy as they’ve been since Week 1 on Sunday. Left tackle Eric Fisher (groin) and defensive end Alex Okafor (ankle) are the only players ruled out.

Top pass rusher Frank Clark, who had missed a couple of games with a neck injury, is expected back after practicing on a limited basis this week. Also expected back are right guard Laurent Duvernay-Tardif (ankle) and cornerback Kendall Fuller (thumb), both of whom practiced all week.

“It’s a long season. We still have a lot to go,” Mahomes said. “But every single day it seems like we’re getting better in every aspect of the game. You want to do that. Obviously, we went through a stretch where we lost games that we didn’t want to, but we now see that everyone is pulling together and building together and I’m excited for the rest of the season.”