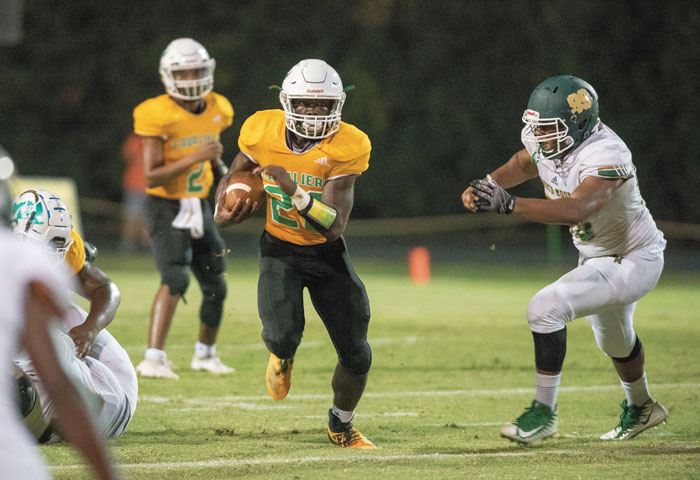 The Cavaliers completed a perfect 6-0 conference slate, to go along with an 8-3 overall record. When the playoff pairings were announced on Saturday, North was given a No. 4 seed in the 1AA East bracket. The Cavs have a first-round bye and a home game on Nov. 22.

South Davidson, which battled hard and trailed late in the second quarter by “just” 19-0, ended its season at 1-10 and 1-5 in the YVC.

Based on North’s 72-3 thrashing of the league’s last-place team, Chatham Central, many assumed that Friday night’s game could be similar, with star running back Malcolm Wilson running wild.

It wasn’t quite that easy, as the Wildcats’ defense had a good plan and made the Cavaliers put together drives for their scores, instead of one-play, long TD runs.

On offense, while the Wildcats didn’t score, they did put together some long drives and threw just one pass — an interception by North’s Zay Davis. South ran the ball 44 times for 100 yards, and the clock kept ticking.

“South Davidson did a good job of having a game plan and coming in here and executing it,” said Hampton. “They ate up a lot of clock. Our offense, we had to take advantage of our opportunities and we were successful, scoring on seven of our eight possessions.

“We would’ve liked to have hit it a little more quickly, and get some more guys on the field late in the game, but with that running clock, it doesn’t always happen,” continued Hampton. “I think South Davidson ran out the last six or seven minutes of the ballgame.”

It was not another record-setting night for Wilson, but he did lead North with 127 yards on 13 carries and four touchdowns — scoring plays of 1, 12, 15 and 21 yards. Wilson’s longest run came in the first quarter, a 31-yard dash.

“All in all, I’m pleased with our guys,” said Hampton. “We were coming off a bye week, and you’re always a little worried about that. So, we are going to celebrate this conference championship and see what happens tomorrow (with the playoff pairings).

Quarterback Kyree Sims ran for 40 yards and passed for 99 — and gave Big Green Nation a scare when he limped off the field after being tackled out of bounds during the first series of the game.

North went on to take a 7-0 lead three plays later on Wilson’s 1-yard plunge, and Sims re-appeared on the Cavaliers’ second possession. He showed no signs of the injury, and Hampton related Sims’ passing percentage (7-of-15) to the sudden cold weather.

“Of course, we haven’t had temperatures like this and I think it affected the passing game some,” added Hampton. “Now that we’ve played in it, we can adjust, because it’s probably going to be cold, going forward in the playoffs.”

Wilson’s scoring runs came in the first and third quarters — two in each. In the second period, the Cavaliers scored on a 30-yard burst by Jaharion Graham and a 15-yard hook-and-lateral between Sims and receivers Denerio Robinson and James Gladden.

Gladden went the final 10 yards for the touchdown, with 0:00 on the clock. It was an impressive drive in the final 38 seconds before halftime by North, going 68 yards in six plays. A South Davidson offsides penalty helped, stopping the clock at :06, just before the hook-and-lateral. The big play gave North a 26-0 lead at the break.

The Cavaliers also started the second half with a bang, recovering their own kickoff at the Wildcats’ 30-yard line. Davis went up the middle for 15 yards and then on the next play, Wilson scored, going the other 15 yards.

Wilson’s last TD came on a 21-yard burst, giving the Cavaliers a 40-0 advantage with 2:49 left in the third period. Hampton got his ace runner out of the game at that point.

North’s only possession in the fourth quarter, other than last-second kneel downs, lasted one play. Sophomore running back Ronnie Fennell, who led the jayvees this season, hit a hole and was gone for a 61-yard scoring dash at the 8:14 mark.

South then had a nine-play drive that basically ran out the clock. Quarterback Damon Hill and running back Isaiah Ramsey took turns pounding the football as the Wildcats went 30 yards before losing possession on downs.

Hill and Ramsey turned in gritty performances, combining for 79 of South’s 100 rushing yards, taking numerous big hits from the North defense. The Cavs’ defense pretty much kept the Wildcats between the 30-yard lines, and limited the visitors to just 2.3 yards per carry.

“Their quarterback and fullback hit it hard, got downhill in a hurry and our guys had to play responsibility football,” said Hampton. “South didn’t give up and obviously, he’s (head coach Tim Hill) building something down there. We thought we could exploit our speed a little better, but they made some plays and made us snap it again — which is what you ask your defense to do.”

North linebacker Jordan Goodine said the Cavaliers wanted the shutout, and got better as the game progressed.

“We were expecting to shut ’em down, but that first drive, they started shoving it down on us, so we had to tighten it up a little bit,” said Goodine. “We realized we had to buckle down and play harder. We got it figured out.”

Goodine added that he plans to hit the weight room and get even stronger in the two weeks before North plays its first playoff game.

“I’ve got two weeks to get stronger,” said the smiling Goodine. “We’ve just got to focus and work hard so we can make a run at the state championship.”

NOTE: Davis’ interception was his county-leading sixth pick this season. … Davis’ brother, Khalil, a freshman linebacker, had a 12-yard sack of South QB Hill, getting the ball back for North, just before halftime. … Tsion Delaney and Nashid Tabb recovered fumbles for the Cavaliers. … North is now 7-0 all-time against South Davidson.