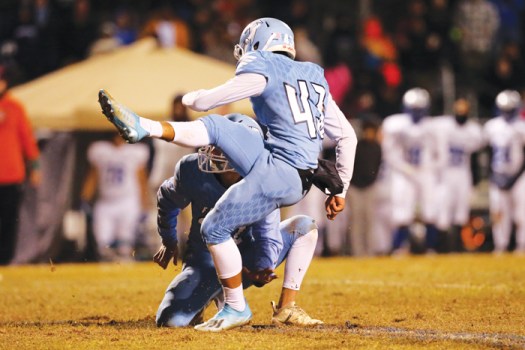 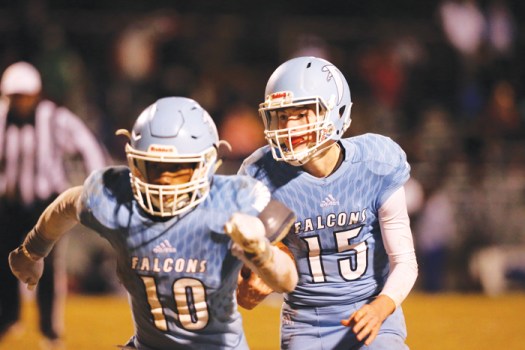 West Rowan QB Noah Loeblein #15 follows running back Jalen Houston #10 around the outside to pick up a first down. James SIpes for the Salisbury Post 11/8/2019 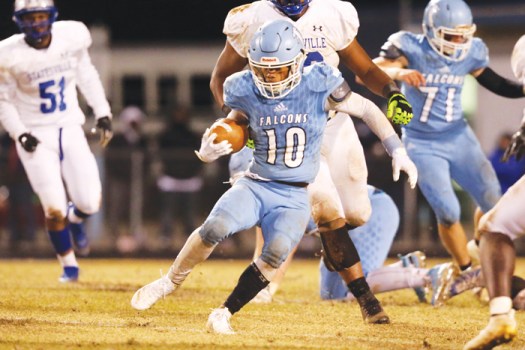 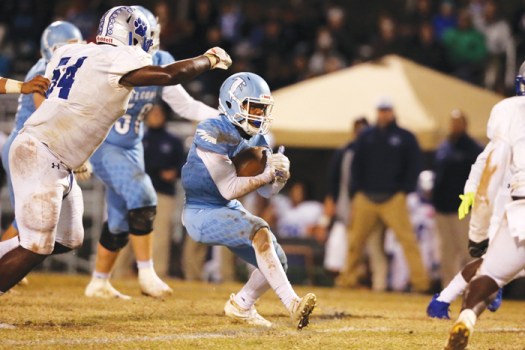 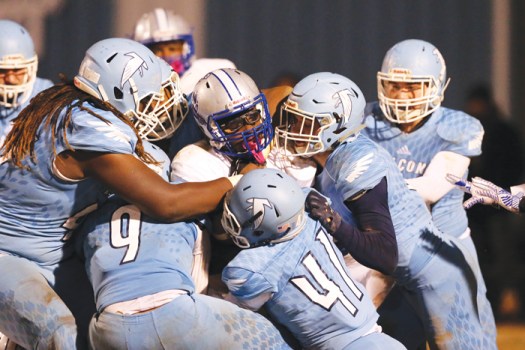 The West Rowan defense puts up a successful goal line stand forcing Statesville to settle for a field goal. James SIpes for the Salisbury Post 11/8/2019 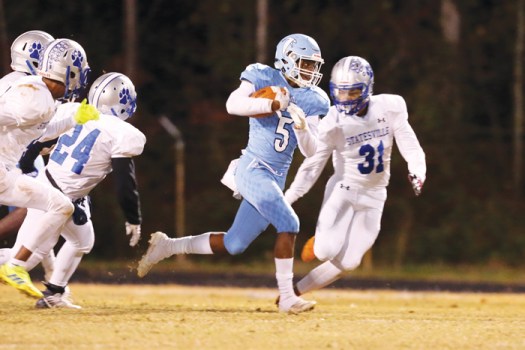 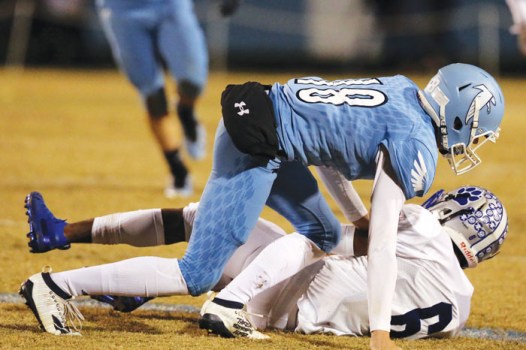 West Rowanís #18 Zach Martlock put a hit on Statesville receiver #6 M.Dalton at the line of scrimmage for no gain on the play. James SIpes for the Salisbury Post 11/8/2019

“I told him West Rowan was good enough that this one might come down to a kick,” Gusler said. “I told him he needed to stay calm and relaxed.”

West Rowan was all in, but Buckner was ready when needed, and he stayed calm. He not only kicked three critical extra points and a fourth-quarter field goal in regulation, he booted what proved to be the game-deciding, 24-yard field goal in overtime. Buckner’s foot, the arm of Debanye Moore (296 passing yards), the hands of  Ky’wuan Dukes and Jasaiah Gathings and the biceps of massive defensive lineman Jason Shuford lifted the Greyhounds past West Rowan, 27-24.

“When No. 40 (Shuford) got his hands on you, the only place you were going was straight down,” West standout Jalen Houston said.

After Statesville (11-0, 5-0) went on top on Buckner’s field goal in overtime, West Rowan (7-4, 4-1) got its turn with the ball in the showdown for the North Piedmont Conference title. The Falcons were stuffed on third down at the 2-yard line and sent out kicker Federico Cruz and the field-goal unit. But the snap and hold parts of the field-goal equation are just as important as the kick. That stuff isn’t automatic, not at the high school level. West didn’t execute. Cruz never even got to swing his leg, and it was over.

“This one hurts, and it hurts a lot,” West head coach Joe Nixon said. “We fought through a lot of adversity, but we came up one play short. That’s football.”

Houston had 166 rushing yards for West, which owned the line of scrimmage, especially in the first half. But the Greyhounds went undefeated in the regular season for the first time in 30 years for a reason. They didn’t fold even when they were getting punched savagely.

“That was a great championship game and no one could have expected more from either team,” Gusler said. “This is an emotional night, winning this championship here at West Rowan, where Scott Young coached some great West Rowan teams. It was an honor to get to coach with Scott, to coach his son, Bryant, for two years, and to be with Scott when Bryant played such a great game here at West (in 2017). That was one of the last games Coach Young got to see.”

Bryant Young, wearing his Wingate football jacket, was on hand last night and was one of dozens of people who came up to give Gusler a postgame hug.

For the first 23 minutes or so, it looked like it would be the Falcons doing the post-game hugging and towel-waving.

West’s game plan was standard — run the ball and stop the run — but the Falcons executed that simple plan with such crushing power and relentless energy that the Greyhounds were knocked off balance for a long time.

West battered all the way to the Statesville 22 on its opening drive. West was stopped on a conservative third-and-7 run by Houston and Cruz missed a field goal from 39 yards, but the Falcons’ offensive line had made its point. Statesville might be undefeated, but the Falcons still could move it 5 or 6 yards at a time.

Then it was time for West’s defense to make a statement. The Falcons made it. The Greyhounds’ first offensive possession was total mayhem, three-and-out, followed by a short punt, and West had the ball back with a short field to work with. The Falcons cashed in, with Baiden Suddarth, a linebacker who serves as their short-yardage back, punching the ball into the end zone. Cruz’s PAT made it 7-0.

A first quarter that was just about all West Rowan ended with West DB Zach Martlock leveling a Statesville receiver.

But Statesville stabilized in the early stages of the second quarter. Moore hit Gathings, racing down the Statesville sideline, for a 50-yard touchdown. It was 7-all after Buckner’s conversion.

West needed only a handful of plays to answer. Sophomore QB Noah Loeblein, throwing his first pass of the night, found Damon Phillippe for 14 yards over the middle and a first down at the Statesville 29. Houston went darting to the house a few seconds later for a 14-7 West lead.

“Our offensive linemen were getting a good push, and I was seeing some big holes develop,” Houston said. “My job was to hit that hole fast.”

With the clock sliding under two minutes in the first half, West had to punt, but the special-teams unit made one of those plays that usually decide games. Defensive end Ashton Matthews stripped the Statesville return man near the West 15. Alert DB Reggie Everhart scooped and scored, and the stunned Greyhounds were down 21-7.

That was one of the pivotal moments in the game. Statesville was reeling.

“I kept telling our guys not to freak out, that we were still OK,” Gusler said. “We still had enough time to score before the half and we’d get the ball to start the second half.”

Moore, a southpaw gunslinger, didn’t freak out. He hit key passes. Statesville surged down the field in the final minute. Caylon Imes got the TD from the 1, with 11 seconds left in the half, and even though Statesville was still down 21-14, momentum had tipped toward the Greyhounds for the first time.

“We did a lot of good things,” Nixon said. “We stopped their running game and we made them one-dimensional, just like we wanted to do. But their quarterback is good and their receivers are good. They made a bunch of plays in the passing game.”

The halftime stat sheet told a tale of West domination of the line of scrimmage. Houston had 93 rushing yards at the break, while Cayleb Brawley and Loeblein racked up decent gains. On the other hand, Statesville had minus rushing yardage at halftime. Imes, who had been running wild in the NPC, had been bludgeoned by Suddarth and towering West linemen Zeek Biggers and Chad McCombs.

“We were still up on the scoreboard,” Houston said. “That score they had at the end of the half did hurt some, but we still believed this was our game.”

Gusler challenged his linemen at halftime to stop losing the fight in the trenches. They responded. Things evened out.

Statesville’s Tynan Tucker returned the second-half kickoff to the 44 and the Greyhounds started with good field position. On that humongous possession, the Greyhounds finished their drive. The 16-yard touchdown came on a remarkable catch by Dukes, who was bracketed by two Falcons, but went up and made the catch, anyway. The Falcons were right where they were supposed to be, but Moore and Dukes made a big-time play. It was 21-all with 9:45 left in the third quarter.

Statesville got the ball back, threatening to take the lead for the first time, but Everhart came up to make a stop when Statesville went for it on fourth-and-2 near midfield.

West had a great chance for a go-ahead touchdown, but Loeblein overthrew Ty’Kese Warren, who had beaten Statesville’s deep defenders.

West Rowan’s defense made a stand inside its 5-yard line early in the fourth quarter, but Buckner kicked the short field goal that gave the Greyhounds their first lead at 24-21 with 9:58 remaining.

“He’s only been about 80 percent this year on extra points, so kicks haven’t been a sure things for us, but a lot of our issues have been on the snap or the hold, not the kick,” Gusler said.

Down by a field goal, West Rowan launched a determined drive that wiped more than five minutes off the clock. Loeblein converted a fourth-and-1 at the Statesville 41 with a run and the Falcons moved all the way to the Statesville 11 before getting stopped. Cruz, a veteran, calmly booted the field goal for 24-all with 4:10 left in regulation.

Both defenses got critical stops late, and the game headed to overtime. Overtimes have not been kind to the Falcons recently. They lost to South Iredell in two overtimes in 2018.

Statesville had the ball first at the West 10, and a dropped pass and a pass breakup quickly brought up third down. Moore scrambled near the 3 on third down, with Will Moseley making the stop. On fourth down, Gusler called on Buckner, and his kick squeezed through the uprights for three precious points.

West probably got a break on first down on its possession. Houston  carried the ball to the 4 and appeared to lose the ball before he was down, but it was ruled not to be a fumble. Suddarth went in to pound it straight ahead on second down, and hammered it to the 2. On third down, Houston couldn’t find any daylight and got stopped at the 2. The Falcons opted for the field goal to tie and go to a second OT period, but it didn’t work out. As Nixon said, that’s football.

“What a feeling,” Gusler said. “Holy cow! What an unbelievable feeling to win this game.”

While Statesville projects to be the No. 2 seed in the 3A West playoff bracket, the season is also a long way from over for West Rowan.

“This was a tough game, but we knew it was going to be tough,” Nixon said. “Our guys fought really hard, and we’ll put it behind us and move on to the playoffs.”

The Falcons also will be in the 3A West bracket.

West projects as the No. 7 seed, which could mean, believe it or not, a second-round rematch with Statesville in Greyhound Hollow.

Pairings and seeds will be released by the NCHSAA today.