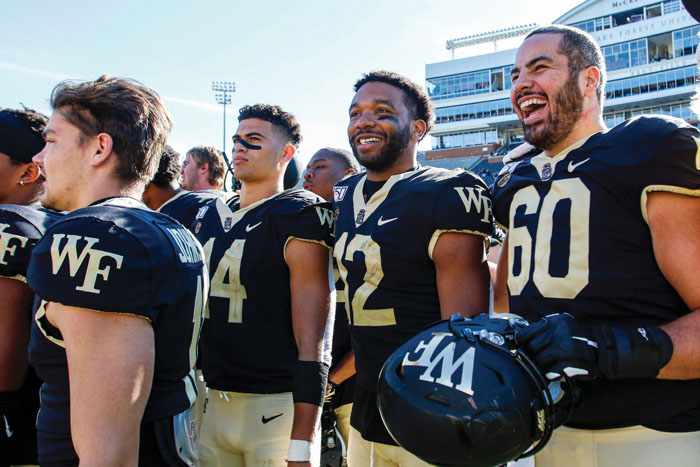 The surprising Demon Deacons look to stay a game behind Atlantic Division-leading Clemson before the teams meet in Death Valley next weekend. Virginia Tech is tied with Virginia (4-2) and Pittsburgh (3-2) in the Coastal Division loss column and still has games against both later in the season.

Wake Forest QB Jamie Newman against the Virginia Tech defense. Coming off a solid effort in a heartbreaking last-minute loss at Notre Dame, the Hokies will be inspired by Bud Foster Day to slow the high-scoring Demon Deacons, and Foster will surely dial up something to confound the redshirt junior. Foster is retiring after 33 years with the Hokies following the season.

Virginia Tech: Whoever plays quarterback. Hendon Hooker is 3-0 as a starter, and coach Justin Fuente said he will start if his left leg injury has healed sufficiently. Quincy Patterson started against Notre Dame and is very much a dual-threat, and Ryan Willis started earlier in the season before getting benched.

The teams haven’t met since 2014 when the Demon Deacons won 6-3 at home in double overtime. … Wake Forest is ranked among the nation’s top 10 teams in total offense, passing offense and third down conversions. … The Deacons are 7-1 for only the third time in their history and first since 2006. … The Hokies won 52-20 at Lane Stadium when Wake Forest last visited in 2010. … Virginia Tech leads the ACC is red zone offense, having scored 22 touchdowns and kicked eight field goals on 31 trips inside the 20.

TALLAHASSEE, Fla. (AP) — Florida State defensive tackle Marvin Wilson will miss the rest of the season due to a hand injury.

Wilson had 44 tackles and five sacks as a junior.

Haggins says that Wilson “will remain involved as a captain and respected leader for our team.”

The Seminoles (4-5, 3-4 Atlantic Coast Conference) are looking to become bowl eligible in the final three games of the season after coach Willie Taggart was dismissed. The Seminoles must win two of those contests to after missing the postseason in 2018. Florida State finishes the season with a home game against FCS Alabama State and a road game vs. No. 10 Florida