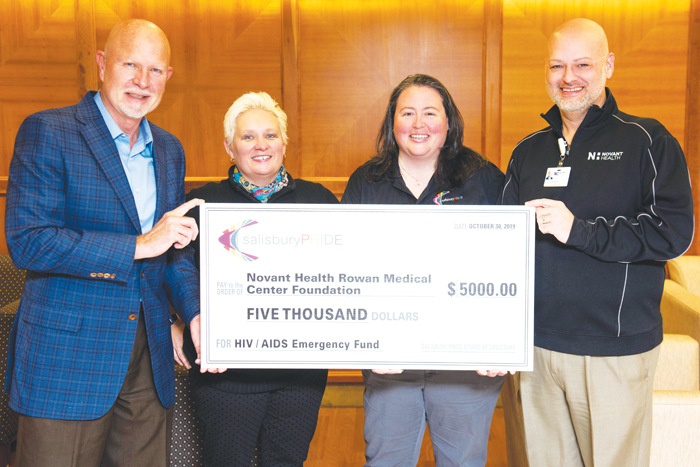 Members of Salisbury Pride’s board presented a check to Novant last Friday.

The money was raised at the organization’s “Over the Rainbow: Broadway With a Twist” fundraiser at the Norvell Theater.

“This event was hugely successful in a variety of ways,” said Becky Lane, vice president of the Salisbury Pride board, in a news release. “Not only was it an opportunity to showcase talented performers onstage but it brought folks together for a great cause. The foundation’s HIV/AIDS Emergency Fund will fill an enormous need in our community for people living with HIV and AIDS.”

The show was also a fundraiser for Salisbury Pride’s youth outreach and community education programs.

Salisbury Pride board President Tim Coffey said the significance of the donation is that it helps people in need.

“This will be a small way to help those who are in need and are affected by HIV or AIDS. This may not change someone’s world, but hopefully as time goes on it eases someone’s day,” Coffey said. “We hope to continue this event on an annual basis, and we are continuously fundraising.”

“This aims to assist individuals who are stressed financially and are faced with the decision to buy medications or pay electric bills or put food on the table,” Parker said. “Emergency funds to cover expenses unforeseen will help keep people healthy and well.”

Parker said the money will not necessarily be used for medications but to help patients who are living “paycheck to paycheck” to pay bills.

“They would fill out an application, state confidentially what their situation is, and if they are in financial straits and how we can help them out, so that they can continue to take their medications,” Parker said. “We don’t provide money directly to the actual patient but instead make a check out to the utility company, to the auto loan company, landlord, etc. We won’t make a check out to the actual applicant, which keeps the funds from being abused.”

Coffey said it’s amazing to imagine how a night of Broadway songs can greatly enhance Pride’s ability to create a more welcoming space for everyone in the community.

Parker said the foundation accepts donations to the HIV-AIDS fund in any amount. Donations of $25,000 would be matched, according to the foundation.