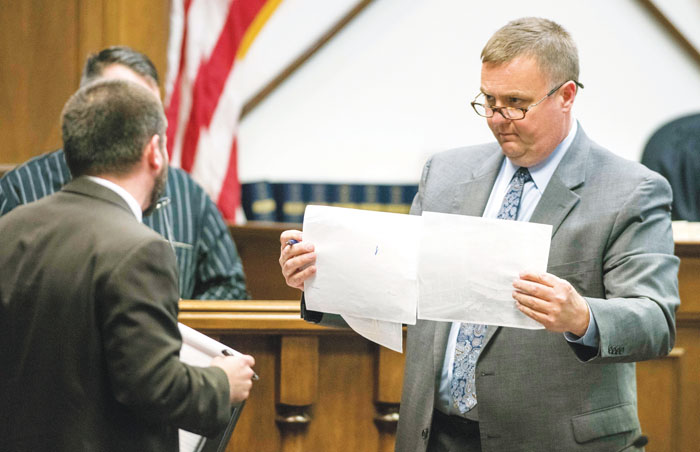 Jordan, a partner of Whitley Jordan & Inge PA, was joined by his wife, Dana, as he was sworn in by N.C. Supreme Court Chief Justice Cheri Beasley during the bar’s annual dinner.

“It’s exciting because we do a lot toward trying to enhance the practice of law and a lot to make sure that we keep within our mission in protecting the general public so that they have attorneys who are qualified and ethical in handling their cases,” Jordan said.

Jordan has served on the State Bar council as a representative of the Rowan County Bar for nine years. He moved up the ranks to serve as chairman of a few committees.

Traditionally, the vice president goes on to serve as president-elect and president of the State Bar.

The appointment is significant because there’s never been an officer from Rowan County, Jordan said. Nor has there been an officer who represents a town the size of Salisbury, one from a small firm and one who is a trial lawyer, he said.

The main goal of the State Bar is to interpret the rules of professional conduct for attorneys and review grievances against attorneys. The bar was established in 1933.

“The State Bar is almost like a legislative organization. Every judicial district sends a representative. Jennifer Davis Hammond is our representative,” Jordan said.

Jordan earned a bachelor of arts degree in political science and accounting from Catawba College and in 1987 and a law degree from Campbell University School of Law in 1990.

He has been a board-certified specialist in criminal law since 2004. He maintains a state and federal criminal law practice in Salisbury, and he has been admitted to the federal district courts in both the Middle and Western districts of North Carolina.

Jordan was a member of the State Bar council from 2010 to 2018, during which time he served as chairman of the ethics and communications committees as well as the lawyers assistance program board.

Jordan currently is a member of the N.C. Indigent Defense Services Commission, a position he has held since 2014. He was recently named its chairman.

In 2012, he was presented with the Professor John Rubin Award for Extraordinary Contributions to Defense Training Programs, which is given each year by the Indigent Defense Services Commission in honor of its namesake at the UNC School of Government. He has coordinated annual continuing legal education programs in Rowan County for the psst 12 years in the areas of criminal and family law.

In addition to his numerous professional activities, Jordan formerly served on the board of directors of the Elizabeth Hanford Dole Red Cross and Rowan Helping Ministries.

For six years, he was the cub master of Cub Scout Pack 254 of Bethpage United Methodist Church in Kannapolis. In 2011, he received the District Award of Merit for service to the Kannapolis District of the Central North Carolina District of the Boy Scouts of America.

He is a member of Fulton 99 Masonic Lodge in Salisbury and attends Harvest Community Church in Kannapolis. He lives in Kannapolis with his wife and two children, who both attend college.

Jordan said he enjoys fly-fishing, raising vegetable in his garden and raising honeybees.