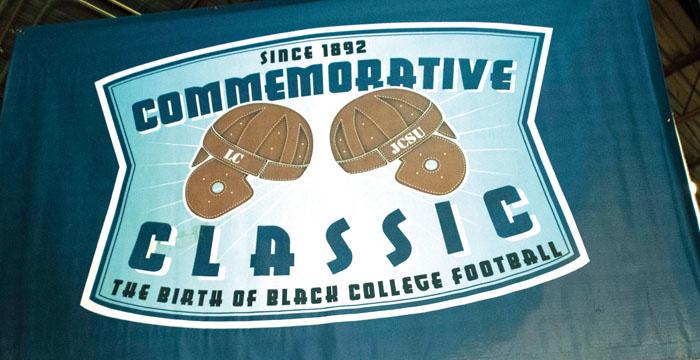 FILE PHOTO ... Livingstone hosts the Commemorative Classic on Saturday as Johnson C. Smith visits for a 1:30 p.m. kickoff. The contest commemorates the birth of black college football, as JCSU — known as Biddle Memorial Institute until 1922 — and Livingstone played for the first time on Dec. 27, 1892, on Livingstone’s snow-blanketed front lawn.

That’s because the 1:30 p.m. kickoff is against Johnson C. Smith in the annual Commemorative Classic.

The contest commemorates the birth of black college football, as J.C. Smith — known as Biddle Memorial Institute until 1922 — and Livingstone played for the first time on Dec. 27, 1892, on Livingstone’s snow-blanketed front lawn.

“It’s the birthplace of black college football,” said Williams. “I think more should be done to celebrate it. I believe that some day, it should be on ESPN or some other network.

“History shows that both teams are going to play hard and it comes down to one or two plays,” continued Williams. “Hopefully, we can keep the trophy on our campus. We haven’t won it two years in a row in a long, long time. It would do well for our morale and confidence to win the Classic again this year.”

Saturday’s game will conclude a season that started with a lot of promise. Livingstone began 4-0, although the schedule was less than strong. The fourth win was at Lincoln, 35-19, for a CIAA victory. That was on Sept. 28.

Since then, the Blue Bears have lost five straight conference games — three at home and all by shutouts (Virginia Union, Winston-Salem State and Fayetteville State).

“We’re playing for an even record and the trophy,” said Williams, concluding his seventh season at the helm. “Let’s just go get a couple of touchdowns. We’ve been shut out three times at home and that a hard pill to swallow. We pride ourselves on getting into the end zone. I want to see us play good football. You’re record tells who you are and this team is good enough to be 5-5, so let’s just line up and go play and let the score speak for itself.”

Williams has used two quarterbacks for most of the season — senior Xavier Longerbeam and sophomore Miles Hayes. That trend should continue on Saturday, as Longerbeam will play in his final collegiate contest.

Hayes was actually voted offensive MVP of last year’s Commemorative Classic, leading Livingstone to victory in Charlotte. He completed 11-of-19 passes for 214 yards, a touchdown and no interceptions.

But this season, Hayes struggled at times and Longerbeam regained his starting position.

“I think the game is slowing down for Miles,” added Williams. “Since he’s had a chance to come off the bench and see the game differently, he’s played better. Miles is still just 19 years old and he needs some help from the older guys to catch the ball and restore his confidence.

“But Miles has been real positive about not starting,” continued Williams. “Remember, he got thrown into the fire pretty early, as an 18-year-old freshman and then, he got hurt for some of the season. He’s continuing the learning process and he’ll do well in the years to come.”

The Golden Bulls like to run the football and are led by red-shirt freshman running back Emanuel Wilson, who Williams calls “one of the best running backs in all of Division II football.”

In nine games, Wilson has rushed for 993 yards on 145 carries, averaging 110 yards per game — ranking him 13th in the nation and second in the CIAA. He also has 12 touchdowns.

Wilson has had some injuries and last Saturday, against St. Aug’s, he managed just 6 yards on 10 attempts. However, Wilson has five games of 135 yards or more, including a season-best 265 yards and three scores against Benedict.

NOTES: Livingstone’s defense was the key to last year’s Commemorative Classic victory, holding the Golden Bulls to just 107 total yards and six first downs. Lineman Devonte Adams led the way with five tackles while safety Walter Watkins came up with an interception … in addition to Longerbeam, Livingstone’s roster lists 24 other players who can take part in Senior Day.

Salisbury soccer opens 2A playoffs with win over Grizzlies