By Dr. Da’Tarvia A. Parrish
For the Salisbury Post

This has been a year of loss for the international literary community. More notably, the black community has taken a hit. Writers whose pens eloquently sketch living black, at the crown of America’s self-examination and transition into a modern world, have been punctuated with a period. Paule Marshall, Toni Morrison and now, Ernest Gaines, have left this earth; however, their literary thumbprints will live, inspire and teach generations to come. 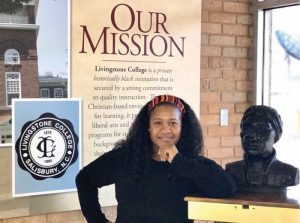 As a 2016 National Endowment for the Humanities Ernest Gaines Institute Fellow, the passing of Gaines has caused my heart to skip a beat. Ernest James Gaines, born in Pointe Coupee Parish, Louisiana, was more than a great American Southern novelist. He was a literary master who painted portraits of Louisiana scenery and Louisiana souls.

His humility in depicting painful and controversial realities in American society positioned him as one of the greatest literary minds from America. In addition to being the recipient of numerous awards and honors, his work, “The Autobiography of Miss Jane Pittman,” is a required reader for middle school children in public schools in France, and my favorite, “A Lesson Before Dying,” won the National Book Critics Circle Award for fiction, and is a listed book for the National Endowment for the Arts’ The Big Read.

As a participant in the NEH Gaines Institute hosted at The Gaines Center on the campus of the University of Louisiana at Lafayette, I have read and I have autographed copies of all of Gaines’s texts except “The Tragedy of Brady Sims” (2017), released after the 2016 Institute. I promised myself I would have “Tragedy” autographed by Gaines in an effort to take advantage of an invitation he extended to the NEH Fellows to visit his home and the cemetery on Nov. 1, All Saints’ Day, for ceremonial upkeep. Time wasn’t kind to me.

As an educator, Gaines’ works motivate me, and as a humanitarian, his life moved me. Incidentally, I am writing about “A Lesson Before Dying.” The text is a struggle for inner strength and dignity as the main character, Grant Wiggins, is an educator in an underfunded school who is undergoing teacher burnout.

This work serves as encouragement to educators as Professor Wiggins reaches his most challenging student, death row inmate Jefferson, through the humanities — and achieves the ultimate student learning outcome, self-worth.

Furthermore, Gaines not only wrote about his Louisiana experience; he honored it. After years of living in California, Gaines moved back home to the plantation where he once worked as child that served his family for five generations.

He and his wife Dianne purchased this land, built their home on this land, and moved the 100-year-old church from the plantation to their back yard. Likewise, the land includes a cemetery where generations of blacks on the plantation were buried.

As a fellow, I was welcomed in their home, sat and sang in the church, and was awed by the history and imaginings of stories untold in the graveyard. I recall Gaines stating, he, too, wanted to be buried in the cemetery “to lie with those who have no mark.”

Dr. Ernest James Gaines was a genuine and gentle man, with a beautiful wife, Dianne, who complemented his character. His works and life is the black experience in America. (1) We recognize the importance of marginalized voices. (2) We engage in acts to have our voices heard. (3) We remember and respect our roots.

I am glad to say I met him, I love him, and through his writings and our brief acquaintance, I know for certain, he loved all — and he truly loved his craft and his home, Louisiana.