Laugh with and at ‘Vanya and Masha and Sonia and Spike’ 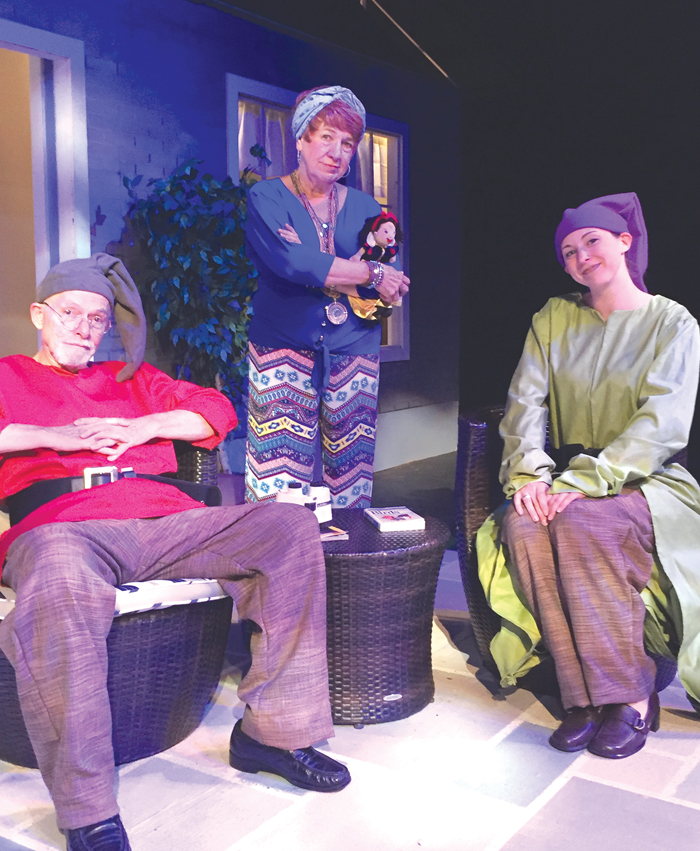 Submitted photo Kurt Corriher as Vanya, Mary Ann McCubbin as Cassandra and Rachel Brammel as Nina in 'Vanya and Sonia and Masha and Spike' at Lee Street theatre.

If you’re of an age, “Vanya and Masha and Sonia and Spike” will have you laughing until you can’t catch your breath.

And if you know writer Anton Chekov, you’ll love it, too.

But if you’re just an average joe, it will still be a fun evening at Lee Street theatre as you watch this St. Thomas Players’ production.

Director — and actor — Matthew Monte has a great cast and a fabulous set designed by Rod Oden. Monte turned this quirky play about aging and family and what you make of your life into something truly funny. Oh, there are sad bits, to be sure, but lighten up. These folks may be happy being miserable, but they’re going to feel a change in the wind soon.

Kurt Corriher is just outstanding as Vanya, a man nearing 60 with no real focus in life and not many prospects. Corriher performs a sizzling, memory-packed monologue with the key line, “We used to lick stamps!” that had the audience just about incapacitated with laughter and gasps of recognition.

Thanks to playwright Christopher Durang, the speech is chock full of pop culture references from 50 to 60 years ago, “Ozzie and Harriet” — “It was boring but we all watched it together,” to Ed Sullivan to telephones with dials to actual letters that required you to “lick postage stamps!”

This alone is worth your time and money.

But, wait, there’s more! Mary Ann McCubbin is absolutely wacky as Cassandra, the prophetic cleaning lady. McCubbin practically chews the scenery with her hammy “predictions,” during which she quotes, among other things, Greek tragedies. You can tell this actress is loving every minute of it. Just remember this, “Beware Hootiepie!”

There’s Lesi Jonap as Sonia, a miserable midlife crisis sister to Vanya. They live together in their parents’ old house because they took care of them for 15 years. Sonia has no life — she spent it as a caregiver, seeing to others’ needs, not her own. She wants some happiness, something other than long, dull days staring out at the pond, though that’s kind of nice. She’s tired of bickering with her brother — well, Sonia was adopted, so he isn’t really her brother, she points out.

She mopes around complaining and criticizing, taking offense at every little thing.

And here comes Masha, the star of the family, literally. She’s an actress, star of stage and screen — mostly screen and a horror movie franchise that’s gone so far as Part 5. She arrives with her boy toy, Spike, a young stud who seems very happy taking his clothes off. She’s had five husbands, and her star is beginning to fade.

The lovely Jean Kadela, who was heartbreaking in “Mothers and Sons,” shows her talent for comedy, as well. She’s got good timing and plays self-centered Masha to the hilt, especially in her ridiculous costume. What an egomaniac she is. And she’s totally unsympathetic to her brother and sister, mentioning repeatedly that she pays for the upkeep of the house.

She has arrived to go to a party at what used to be author Dorothy Parker’s home, down the street, complete with a costume plan for the whole family. She, of course, will be Cinderella. Let’s not spoil the surprise of who the others will be.

Jonathan Coarsey, once a fixture on local stages, plays young Spike. And he’s got a nice set of muscles. Word of warning: He spends a lot of time in his underwear. But Spike is so transparent and so, well, Gen Y.

Finally, we meet Nina, a young ingenue, who knows all the classic plays and playwrights, the great old movies and is completely thrilled to meet Masha, though she takes a real liking to Vanya. He tells her what he has told no one — he’s written a play. So we have plenty of references to another great bit of theater — “The Seagull,” again by Anton Chekov.

Rachel Bammel is sweet and pretty and so sincere as young Nina.

When Sonia is more popular at the costume ball as the Evil Queen, played by Maggie Smith, Masha begins to unravel, and from this point, emotions spill out and splatter everywhere.

But, wait, didn’t Cassandra say “Beware Hootiepie!”? Hold that thought and wait for the falling-apart, coming-back-together conclusion for this typically dysfunctional family.

And keep one thing in mind: “We used to lick postage stamps!”

“Vanya and Masha and Sonia and Spike” opens tonight at Lee Street theatre, 329 N. Lee St., with performances at 7:30 p.m. Friday, Saturday and Nov. 14-16. There is some language and sexual innuendo in the  play.