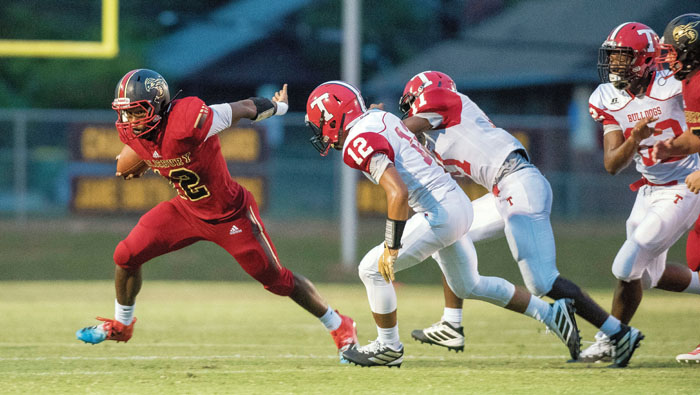 Fifty years ago, this week, East Rowan routed Central Davidson 51-0 for its fifth shutout of the season to move to 10-0 and conclude the only perfect regular season in school history.

Statesville will be trying to finish a perfect regular season tonight at West Rowan in what has turned out to be a North Piedmont Conference championship game. It would be the first such season in 30 years for the Greyhounds.

Also, not far away, Cox Mill will travel to Northwest Cabarrus. The Trojans, who really have it going right now and have won 23 of their last 24, will be seeking their second straight perfect regular season. Northwest Cabarrus is proof that turnarounds can happen quickly in high school football. Northwest was 2-9 as recently as 2016.

Conference championships will be finalized tonight. Teams will be crowned. That’s a preseason goal for every program.

North Rowan, which has won seven in a row, will make things official as far as an outright 1A Yadkin Valley Conference championship when the Cavaliers welcome South Davidson to Spencer. You never want to count chickens before they hatch and all that, but according to the Massey Ratings, North Rowan is a 41-point favorite with a 100 percent win probability. I think we’re all on board the BGN train for this one.

North Rowan won its most recent conference title when it went 5-0 in the 2A Central Carolina Conference in 2016. That was the pre-Ledford-North Davidson-Oak Grove CCC. The CCC is a little scarier now.

Speaking of the CCC, Salisbury is expected to conclude a solid 9-2 season tonight with a victory against South Rowan. The Hornets haven’t lost at home this season and have a 99 percent win probability.

A victory would mean the Hornets tying for second with two other teams. Oak Grove hosts ninth-place East Davidson, so the Grizzlies are going to finish with one loss and win the league championship. Thomasville plays last-place Lexington, so unless something unbelievable happens, the Bulldogs are going to finish with two losses. The big contest in the CCC is North Davidson at Ledford, and the winner of that one will also finish with two CCC losses. Salisbury fans can cheer for Ledford. Salisbury would win a tiebreaker with Thomasville and Ledford and would get the league’s No. 2 seed.

The 10-team CCC gets three automatic playoff berths, but those top five teams are all sure to be part of the field in one of the four brackets – 2AA East, 2AA West, 2A East or 2A West. Salisbury appears ticketed for the 2AA West bracket and would get a first-round home game if it’s the No. 2 seed from the league.

In the North Piedmont Conference, there are no complications. West Rowan, which has won five straight, takes on the Greyhounds in Mount Ulla. Both are 4-0 in the conference. This is a scheduling dream to have these two meeting on the final night of the regular season.

In the wild and crazy Central Piedmont Conference there are a lot of excellent teams, but no teams that haven’t lost in the conference.

The West Forsyth at Glenn game tonight in Kernersville will decide the league’s champion. Both are 3-1 in a six-team league. West Forsyth was stunned by Davie. Glenn lost by three touchdowns to East Forsyth.

In the South Piedmont Conference, your eyes aren’t deceiving you, Cox Mill really is playing Northwest Cabarrus tonight — for the second time. Northwest Cabarrus is not the ideal team to be playing twice, although it probably does great things for Cox Mill’s strength of schedule.

Cox Mill head coach Craig Stewart explained the unusual scheduling is due to the arrival in the South Piedmont Conference next year of the new West Cabarrus High, which projects to take about 300 students away from Cox Mill. The SPC schools came up with a tentative plan to play a rival twice this year, then replace one of those meetings with West Cabarrus next year.

But two A.L. Brown-Concord meetings obviously didn’t happen — that probably would have been too much emotion to deal with. Nor did two Robinson-Central Cabarrus meetings. Most of the SPC chools found another opponent. But Cox Mill and Northwest Cabarrus didn’t, and now the schools, eight miles apart, are headed for their second clash. Northwest won 37-7 when the teams met on Oct. 4 in a game that didn’t count in the SPC standings.

“They’re really good and we’re just pretty good,” Stewart said. “But we’ve had a look at them, and I think that helps. People kept telling me we didn’t want to play a team like Northwest twice, but it’s not like we were ever going to back out of this game. We want to play it. It’s an opportunity. It’s not often you get a second chance in football against a team that beat you.”

When Cox Mill surprised Central Cabarrus last week, this second Cox Mill-Northwest Cabarrus contest, one that does count in the league standings, took on far more meaning. Cox Mill lost to A.L. Brown, but if it upsets Northwest Cabarrus tonight, on Northwest’s Senior Night, then the Chargers (3-1) tie the Trojans (4-0) for first place and claim the SPC’s No.  1 seed for the playoffs.

Northwest is a 17-point favorite, but Cox Mill will get its shot.

“This one counts a whole lot more than the first one,” Stewart said.

As far as the picks last week, those of us who picked with our hearts, not our heads, that was Marny Hendrick, Scott Maddox and me, missed the Salisbury-North Davidson game. Scott also missed on Davie-East Forsyth, so he was 4-2, while Marny and I were 5-1. For the season, I’m 46-14, Scott is 44-12, and Marny is 42-18. Marny tweets better than he picks, and he’ll let you know what’s happening tonight at North Iredell-East Rowan.

Scott differs on the Statesville-West Rowan and Davie-Reagan matchups. I’ll take Statesville and Reagan. The five unanimous selections all look like lopsided games, although Concord’s been playing better lately, and Carson is not in an impossible matchup.

Salisbury ties for second in the CCC with a win, and the Hornets are 35-point favorites.

Hopefully, you read the story in Thursday’s edition where the magnitude of this game was discussed in some detail.

Statesville has a terrific team, an offense that averages 44 points per game. West Rowan has a very good defense and has played quite well over the last month, although the Falcons haven’t played anyone with a winning record since Sept. 20.

Statesville is an 8-point favorite, but West Rowan has a 32 percent win probability and a reasonable chance of success if it wins the turnover battle and prevails in what should be a fierce fight at the line of scrimmage.

Even after a 55-0 disaster against Statesville last week, it’s hard to imagine anything going wrong for the Mustangs at home in what appears to be their final game of 2019.

MaxPreps ranks North Iredell 107th out of 109 3A teams. The Mustangs are a 33-point favorite with a 99 percent win probability.

South Iredell isn’t great this year, but it won against East Rowan at home, so it probably will be able to handle Carson.

South Iredell allows 31 points per game, but that’s mostly due to a challenging  non-conference schedule.

Carson is given a 5 percent chance of shocking the prognosticators. The Cougars are 27-point underdogs.

Both teams are expected to finish the season tonight.

North back Malcolm Wilson might do some amazing things in this one. Go ahead and pull out the record books.

North’s defense is almost certain to hold South Davidson to a TD or less.

North is 6-0 all-time against the SD Wildcats.

North is headed for the 1AA playoffs and should get a first-round bye.

Reagan is good. Davie is 14-point underdog, but when you score 30-plus, you always have a chance.

Davie appears likely to be in the 4A playoffs.

Historians have this rivalry at 42-42-4 since 1931. That long-term evenness of programs that are about six miles apart, is why the rivalry is one of the best in the state, maybe the best of all.

Concord is going through a rough period, although the Spiders stayed with Northwest Cabarrus for quite a while last week and will be fired up tonight.

A.L. Brown is headed for the 3AA playoffs.