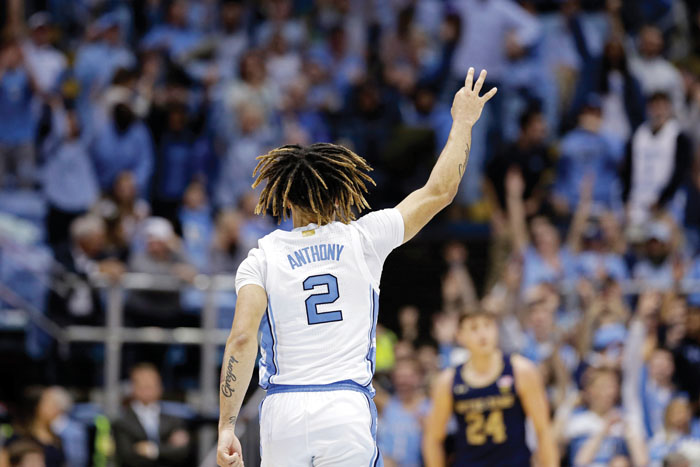 Anthony set the school record for scoring by a freshman in his debut, finishing with 34 points and 11 rebounds while leading the ninth-ranked Tar Heels past Notre Dame 76-65 in their opener Wednesday night.

With his father — former UNLV and NBA guard Greg Anthony — in the stands, the Atlantic Coast Conference preseason freshman of the year broke Rashad McCants’ 17-year-old scoring record by a freshman in his first game and finished 12 of 24 from the field with six 3-pointers.

“It’s cool, I’m going to — not celebrate, but be happy about it a little bit tonight, give myself a little pat on the back,” Anthony said. “But we’ve got practice tomorrow. We’ve got to lock back in. We’ve got a game on Friday.”

Anthony scored 15 points during a 29-13 second-half run that put the Tar Heels in control.

Prentiss Hubb scored a career-high 22 points, T.J. Gibbs added 19 and John Mooney finished with 10 for the Fighting Irish. They led 37-32 just under 2 minutes into the second half.

That’s when Anthony took over. He started the run with a runner, reeled off seven straight points for his team and hit three 3s in a 4-minute span, the last of which gave the Tar Heels their first double-figure lead at 61-50 with 9 minutes remaining.

“Sometimes, I used to say, Tyler Hansbrough carried us,” Williams said of about the former national player of the year. “Cole Anthony carried us tonight. … That was pretty impressive, to say the least.”

Notre Dame: The Fighting Irish had never opened a season with a conference game — in any of their conferences — and this was a tough ask, though they did more than simply play the foil in Anthony’s debut. They outscored UNC 12-2 during the few minutes when Anthony was resting on the bench, built that second-half lead on Hubb’s shooting but couldn’t contain the Tar Heels’ freshman down the stretch.

“I thought his dagger 3s were a big part of it,” coach Mike Brey said. “I love how we played. We came ready to battle, but he just got on one of those rolls that we’ve all seen on the AAU circuit. You guys just didn’t see it yet. But you saw it tonight. So I thought that was really the difference.”

North Carolina: Anthony certainly lived up to the hype, becoming the first UNC freshman with at least 30 points and 10 rebounds in a game since Hansbrough against Georgia Tech in 2006. He helped the Tar Heels reach a milestone — they earned their 700th ACC victory, the first program in the conference with that many wins.

THE EYES HAVE IT

Anthony — an eyeglass-wearer off the court — started the game wearing a pair of prescription goggles but ditched them during the first half because he said they affected his depth perception. “When I took those off, something clicked,” Anthony said.

The record Anthony broke was previously held by McCants, who scored 28 points in the opener against Penn State in 2002.