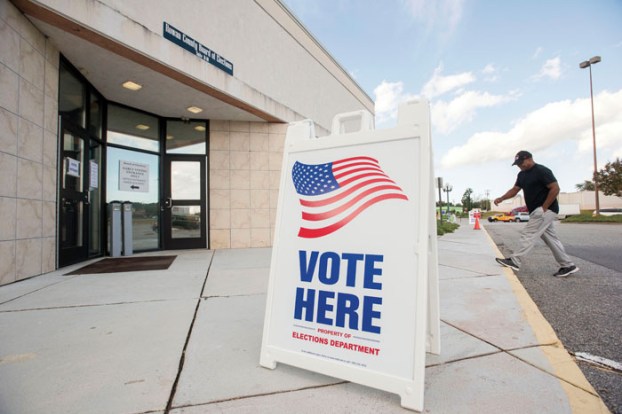 Darrell Foxx heads into the Rowan County Board of Elections Office for early voting in 2019. Jon C. Lakey/Salisbury Post

Salisbury and Rowan County still have a long way to go before municipal voter turnouts can be considered “good,” but there were bright spots in Tuesday’s election results.

The total voter turnout in Rowan was 20.26%, a number the county hasn’t seen since the early 2000s. Importantly and since we compare Rowan to nearby counties in many other ways, local turnout was nearly double that of Cabarrus and Davidson counties and about 8% higher than Iredell and Davie counties. Stanly County didn’t have municipal elections Tuesday.

Data provided to the Post Wednesday by the Board of Elections provide more granular data about turnout.

The Salisbury-specific turnout hovered close to the average — about 22 percent. And the highest turnout precinct in Salisbury, at 29.11%, was North Ward, which contains parts of downtown located north of Innes and Main streets, the Salisbury Country Club, City Park and the Grove Street area.

The lowest turnout precincts in Salisbury election were Sumner, the southwestern-most parts of the city, and West Ward 3, more commonly known as the West End neighborhood.

Spencer was another town where recent controversy may have led to increased turnout, but it fell short of Landis’ numbers. Of Spencer’s 2,057 registered voters, 506, or 24.60% cast ballots. The town board’s disagreements with former Manager Terence Arrington eventually led to his departure. Arrington is now a finalist for the manager job in Port Arthur, Texas, according to reporting from the Post’s sister newspaper, The Port Arthur News.

It was East Spencer that took the turnout cake, with 284 of its 894 voters, 31.77%, casting a ballot in this year’s municipal elections. There doesn’t appear to be a controversy of the magnitude of Spencer or Landis associated with that turnout. Rather, competitive races likely produced a better-than-usual turnout.

Incumbent Mayor Barbara Mallett won by a comfortable margin, but mayoral candidate Tony Hillian ran a good campaign and likely motivated folks to vote who may not have otherwise done so. The town board race was competitive, too.

There’s no doubt about it: 2019 was a better year for municipal voter turnout than 2017. But Rowan County can do better.

Doing better requires the same education and get-out-the-vote efforts seen in presidential and midterm years. Some voters aren’t familiar with their polling place. Others aren’t tuned into what’s going on where they live. Some know how and where to vote, but aren’t motivated to do so by the candidates on the ballot. Get-out-the-vote efforts must be matched by candidates who speak to the needs and desires of more local voters to produce higher turnouts, too.

City councils and town boards will be more representative of the people who live here when a greater portion of people cast ballots in municipal elections. That’s a goal everyone in Rowan County should support.