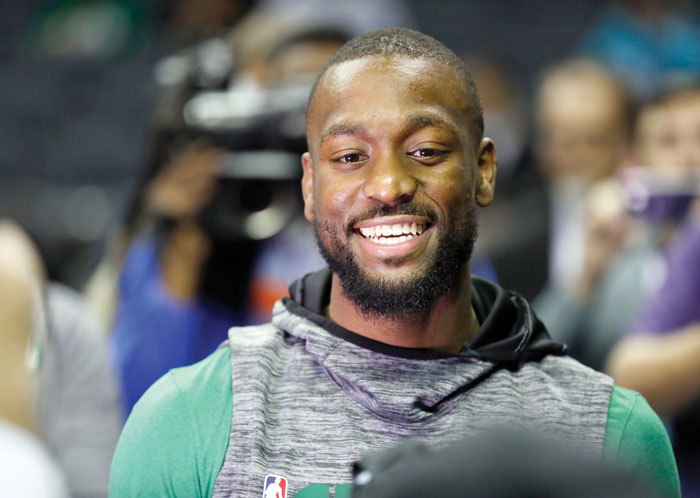 Boston Celtics' Kemba Walker smiles with friends as he makes his way onto the Charlotte Hornets' court before an NBA basketball game between the Celtics and the Hornets in Charlotte, N.C., Thursday, Nov. 7, 2019. Walker formerly played for the Hornets. (AP Photo/Bob Leverone)

CHARLOTTE (AP) — Jayson Tatum scored 23 points, and Kemba Walker got a win in an emotional return to Charlotte as the Boston Celtics defeated the Hornets 108-87 on Thursday night.

Walker had an off night shooting the ball and finished with 14 points and six assists, but the Celtics won their sixth straight game handily. Walker missed his first six shots and didn’t make a field goal until three minutes into the third quarter.

Gordon Hayward added 20 points and 10 rebounds for the Celtics, who scored 17 points off 21 Charlotte turnovers.

Walker received a rousing, one-minute standing ovation from the home crowd after the Hornets showed a highlight tribute on the videoboard that left the point guard in tears.

The three-time All-Star played eight NBA seasons in Charlotte and is the franchise’s all-time leading scorer. He signed with the Celtics this past offseason after Hornets owner Michael Jordan elected not to pay Walker a five-year, $221 million supermax contract.

But he left on good terms with the organization and its fans and said before the game he was expecting a warm response.

“I have always interacted with fans, always signed autographs and always took pictures,” Walker said after shootaround. “I was always nice to everybody, so I don’t think there should be any negative reactions.”

Miles Bridges had 18 points and 10 rebounds to lead the Hornets, who had their three-game win streak snapped. Charlotte was just 6 of 31 from 3-point range.

Hornets: Terry Rozier, signed to replace Walker, was held to three points after shooting 1 of 11 from the field. … Bridges received a technical after mixing it up with Marcus Smart in the fourth quarter. … The Hornets had nine blocks.

Hornets: Wrap up a three-game homestand when they host the Pelicans on Saturday night.