Salisbury soccer opens 2A playoffs with win over Grizzlies 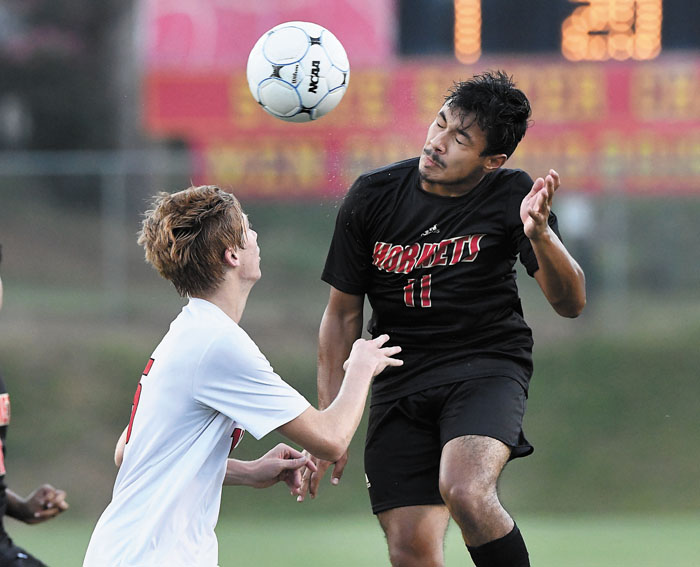 Wayne Hinshaw file photo/for the Salisbury Post ... Salisbury’s Joshua Portillo (11), shown during an earlier boys soccer match this season against South Rowan. On Wednesday, the Hornets defeated Oak Grove, 3-2, in the first round of the state 2A playoffs.

SALISBURY — Salisbury’s boys soccer team has bought its ticket and is taking the ride.

The Hornets launched their quest for a 2A state title Wednesday night by surviving a 3-2, test-of-nerves against visiting Oak Grove — a team that dealt them a pair of 1-0 regular-season losses.

“I am an eternal pessimist, but I came in feeling very confident,” coach Matt Parrish offered, moments after 13th-seeded Salisbury (16-7) won its fourth straight match and advanced to Saturday’s second round. “I felt certain we were going to win this match, even though they had beaten us twice, both fair-and-square, in conference play.”

Parrish wasn’t alone. Listen to striker Josh Portillo — the junior speedboat who rifled two shots off the crossbar, had a breakaway blast swallowed by Oak Grove keeper Gabe Rodriguez and scored the game’s first goal: “I felt something,” he said. “The two games we lost, we gave them the goals. That wasn’t going to happen again. We were winning this game. We had it in us.”

They prevailed, largely by playing air-tight defense over the final 20 minutes. Oak Grove (12-10-1) never led, but never seemed more than a well-placed pass away from tying the score.

“It was a lot more intense than the last time,” losing coach Daniel Baker said. “We left it all on the field, played with no regrets. The just they got one more than we did. Give credit to Coach Parrish. He had his team ready to play.”

That was evident from the start. In the game’s seventh minute, Salisbury forward Chris Portillo drilled a high shot that beat Rodriguez but clanged off the crossbar. Four minutes later he fed a pass to his brother Josh, who shielded the ball from two defenders and ripped a 10-yard shot into the net.

The Hornets doubled their lead just 3:43 later, when junior Gabriel Fuentes — the center back whose costly foul led to a converted penalty kick for the Grizzlies on Oct. 16 — gained a measure of revenge. “That foul is still in my head,” he said. “I made my teammates cry. This was a chance to redeem myself.”

This time, the left-footed Fuentes crunched a shot off the crossbar, collected his own rebound and buried a right-footed shot into the lower left corner for a 2-0 SHS lead. “My father always told me not to be afraid to shoot,” he said with a warm, post-game smile. “When the ball came down and went off a defender, I had to try again. The left foot didn’t work so I tried the right.”

Salisbury’s momentum continued to build as the first half ticked to a close, only to be interrupted when Oak Grove’s Noah Baab slid a shot past Hornets’ keeper Wade Robins with 27.6 seconds on the clock. “That changed everything,” Baker said. “At halftime, we understood we were still in the game — and both teams knew it.”

Sophomore midfielder Will Webb provided the Salisbury view. “We knew it would take everything we had,” he explained. “At halftime, we just said, ‘whatever it takes,’ because we really wanted to beat these guys.”

That seemed more likely after Chris Portillo settled an elevated pass from his brother and pumped a shot past Rodriguez, providing a 3-1 lead with 20:53 remaining. But again the Grizzlies counter-punched, storming back on a goal by Raul Santos just 31 seconds later.

“Our coach tells us never to give a team hope,” said Fuentes. “But that’s exactly what we did.”

Each team threatened to score in the waning moments, most notably when Josh Portillo spun out of a double-team on the left side and drove another blast off the crossbar with 13:30 to play. But for the most part, the Hornets played steel-curtain defense when it was most needed.

“That last 20 minutes felt like an hour, especially for the defenders,” Fuentes said. “We had to eliminate every threat.”

Parrish called Fuentes “a Godsend,” and added: “He’s a fantastic kid and a fantastic player. He’s not one of those kids who will bark at people without expecting to do it himself. He is a lead-first example.”

Webb was equally tested down the stretch. “But our confidence was never rattled,” he said. “And confidence, that’s what helped us win the game.”

Win the game and stay on the ride.

NOTES: Salisbury will play at fourth-seeded Shelby in Saturday’s second round. The Lions (20-0-2) have outscored opponents 103-14 and recorded 12 shutouts after a 2-0, first-round win against Franklin. … This was the first playoff appearance for 20th-seed Oak Grove. The Grizzlies went 0-20-1 in 2017 and 4-17 last season.