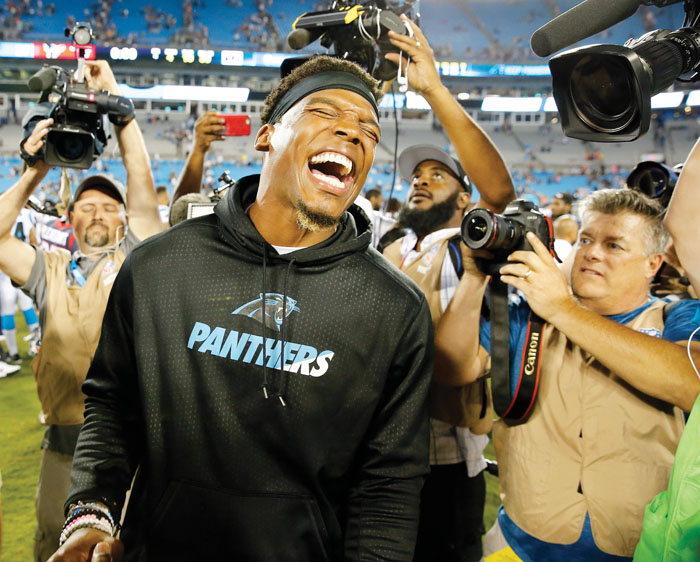 FILE - In this Aug. 9, 2017, file photo, Carolina Panthers quarterback Cam Newton laughs after the second half of an NFL preseason football game against the Houston Texans, in Charlotte, N.C. Cam Newton is a former league MVP and the long-time face of the Panthers franchise. But it's hard not to wonder if his future in Carolina is coming to an end following his recent spate of injuries. (AP Photo/Jason E. Miczek, File)

CHARLOTTE (AP) — Cam Newton’s injury status has raised questions about whether he’s played his final game for the Carolina Panthers.

The 2015 league MVP has struggled with shoulder and foot issues the last two seasons and will finish the season on injured reserve. He is 0-8 in his last eight starts and the Panthers face a difficult decision in February.

The organization must decide whether to pay Newton $21.1 million next season or cut ties with the longtime face of the franchise and save $19 million under the 2020 salary cap. If they decide to let Newton go, the quarterback would only cost the Panthers $2 million next season in dead cap space.

Trading Newton would be another option, although the Panthers would have to find a team willing to take on his exiting contract or agree to give the QB an extension.

Panthers general manager Marty Hurney and coach Ron Rivera aren’t ready to discuss that option, not with the Panthers (5-3) very much in the playoff hunt.

Newton, who hasn’t done an interview about his health since aggravating his foot injury in a Week 2 loss to Tampa Bay, made a brief cameo in the locker room on Wednesday.

When pressed to talk, Newton looked back at reporters with a smile on his face and said, “Y’all got all of the answers anyway. Y’all going to figure it out.”

Hurney also declined interview requests, instead referring to the statement he released Tuesday. That statement said “at this time, we have decided that the best decision to reach the goal of bringing the foot back to 100% is to place Cam on injured reserve.”

Rivera said it was a “collective decision” between all parties to put Newton on injured reserve but refused to discuss the QB’s situation after making an opening statement.

“We feel right now the best thing was to put him on injured reserve and move forward,” Rivera said. “I really do appreciate everything Cam does and the fact he is still here and wants to be around and be part of it. He’s done a great job doing it. With that, I would like to start talking about playing the Packers” on Sunday.”

The coach was then asked whether he hopes Newton could return for the postseason after serving eight weeks on injured reserve. Rivera offered a terse response.

“That question will not be addressed until it is time to address it,” Rivera said. “So, at the end of the day, he’s on IR. Kyle Allen is our quarterback.”

Rivera did say he expects that the decision will give Allen more clarity as far as his status as the team’s unquestioned starting QB.

Allen is 5-1 as the team’s starting quarterback in place of Newton, but there was some speculation he might lose his job after a 51-13 loss to the 49ers two weeks ago.

“I do think as a player it will help him,” Rivera said. “It’s one of those things where you don’t have to worry, ‘Hey, if I don’t play well back-to-back something is going to happen immediately.’”

But Allen said his approach won’t change now that Newton is on injured reserve.

“To be honest, I always expected to be in this position,” said Allen, who went undrafted in 2018. “… I expected that some way I was going to find a way to get here.”

Rivera wouldn’t rule out the Panthers adding a third quarterback to the roster at some point.

Allen and rookie Will Grier are the only QBs currently on the roster.

For Allen, the rest of the season is an opportunity to bolster his resume and perhaps establish himself as Carolina’s next franchise quarterback.

“I knew when I got my opportunity to play in this league I would have to take advantage of it,” Allen said. “Now I just have a few more opportunities.”

ABOUT FACE: MAYFIELD’S ‘STACHE A NEW TOPIC AS BROWNS SLIDE

BEREA, Ohio (AP) — Baker Mayfield completed his media session without incident and even sported the same mustache he woke up wearing.

At this point, those two things are considered progress for the Browns’ struggling second-year quarterback.

With Cleveland mired in a four-game losing streak inside a season unexpectedly unraveling, Mayfield projected a buttoned-down image on Wednesday as the Browns (2-6) prepared to host the Buffalo Bills (6-2) on Sunday.

Following practice, Mayfield spoke deliberately and objectively while discussing the team’s struggles, his own performance and his hopes of salvaging the season.

No swagger. No sarcasm. Humility.

“We have to stay the course,” he said.

It was a contrast to last week, when a perturbed Mayfield objected to a question and stomped away from his weekly news conference in Cleveland’s locker room. That was followed by a strange sequence in Denver when he curiously shaved before and after a 24-19 loss to the Broncos.

Mayfield started last Sunday with a beard, wore a Fu Manchu mustache during the game and then showed up to his postgame press conference with only a mustache.

On Wednesday, he explained his grooming habits.

“The original thought for me, do handlebars,” said Mayfield, who has maintained the postgame look, which went viral on social media. “I was undefeated before Sunday with the handlebar mustache. So I shaved it off because I didn’t deserve it.”

It’s been that kind of season for Mayfield.

Nothing is going his — or the Browns’ — way.

Although he didn’t throw an interception on Sunday, Mayfield remains tied for the league lead with 12 picks. He’s also last among qualifying QBs in completion percentage (58.7) and touchdown-to-interception rate (0.58).

His frustration has been building, and he acknowledged being exasperated in a Twitter posting following his touchy exchange last week with a reporter, who had asked him about a lack of urgency during the previous week’s loss at New England.

The Browns outgained the Broncos, controlled time of possession, cut down on penalties, didn’t commit a turnover and still lost.

Mayfield said there’s only one way to straighten out the season.

“Stay the course,” he said. “I think no matter what’s going on, we’ve made strides in certain areas that we needed to, but now we just have to make the plays when they’re there. We have to execute when it’s in the red zone. We have to do those obvious things and improve each week because we know that right now with eight games left in the season we have to have a single-week focus coming into it and do our job.”

Browns coach Freddie Kitchens, whose job will be in jeopardy if the losing persists, said Mayfield can’t let the losing affect him.

That’s easier said than done, but Kitchens is confident his 24-year-old quarterback will grow from the experience.

“The game of football is tough, and it is a tough game played by tough people,” said Kitchens, who has been quick to defend Mayfield. “Baker is tough individual mentally and physically. Baker will be fine. He just has to understand to stay in the moment, and I think he does. You come out of bad situations a lot of times better off personally and professionally. He just has to keep his focus on the day and what he is doing in that day.”

One of Mayfield’s biggest issues — and a recurring problem for Cleveland’s offense — has been an inability to consistently connect with star wide receiver Odell Beckham Jr.

The speedy Beckham caught his only touchdown pass in Week 2, and the Browns have not gone to him nearly enough in the red zone. Last week in Denver, Cleveland made five trips inside the Broncos 20 but came away with just one TD.

Mayfield said the expectation that he and Beckham would have instant chemistry was presumptuous.

“People had this picture-perfect thing that it was going to be sunshine and rainbows and he was going to have a whole lot of 1-on-1s,” Mayfield said. “It’s Odell Beckham. He’s going to have double coverage. We have to find ways to format things to get him the ball and force-feed him early on to where he can make an impact before we can have the perfect look to give him a shot play. That’s something that we learned the hard way, but I think as the weeks have gone by, we’ll continue to improve on how to get the ball to him.”

NOTES: S Damarious Randall returned to practice after missing two games with a hamstring injury. He’s not yet sure he’ll face the Bills. … RB Kareem Hunt is eligible to play Sunday after serving his eight-game NFL suspension for two physical altercations. Kitchens is excited about the possibility of pairing Hunt, a former league rushing champion, with Nick Chubb. “I definitely think that both of their skillsets offer you plenty of opportunities to do a lot with those guys,” Kitchens said. “They are both excellent runners, and they both catch the ball very well out of the backfield.”