High school football: West’s defensive line will be a key in NPC showdown 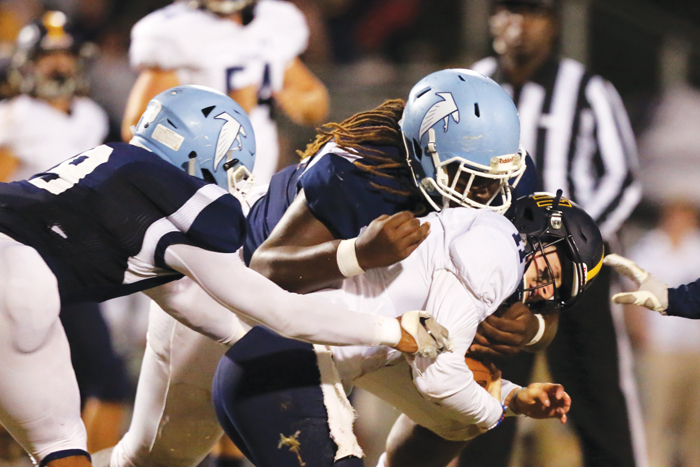 There’s still respect for it statewide because of the four consecutive 3A title-game appearances (and three state championships) from 2008-11.

There’s also respect for it around the county. It’s been a while since the Falcons have played Salisbury, but they’ve had their way against the other four schools — going 17-0 during  Joe Nixon’s head-coaching tenure in Mount Ulla that began in 2015.

They have a chance to change that Friday when they host the powerful, sixth-ranked Statesville Greyhounds, who are tied for first place with West in the NPC. The Greyhounds (10-0, 4-0) are  a steamroller, and they’re taking dead aim at the program’s first unbeaten regular season since 1989.

“Big challenge for us, but big opportunity,” West coach Joe Nixon said. “We’ll show up. Statesville is really good, but this is the kind of big game you’re looking for, the kind of game you want your kids to get to play in. You want to compete for championships.”

To have a chance against a team like that, you have to make them one-dimensional. You have to put them in predictable situations where you know what’s coming.

Occasionally, you run into a team such as the Davie War Eagles that throws the ball so well that you have to try to make them run it.

But 95 percent of high school teams don’t throw the ball like Davie. Most of the time you try to stop the run and force teams to go to the air. Put them in third-and-6 or third-and-8 and go after the quarterback.

With a defensive line led by big seniors Chaz McCombs (6-5, 220) and Levontae Jacobs (6-3, 260) and huge junior Zeek Biggers (6-5, 300), West has always has a chance to stop the run. Other guys who will be a factor up front for the Falcons are Ashton Matthews, James Ball and Quadree Ziyad.

“We have stopped the run well with our guys up front,” Nixon said. “Those guys are a huge key for us. They allow our guys in the back to focus on the pass.”

“We were able to beat them because they turned it over and gave us short fields, but West is as good as anyone we’ve seen upfront,” Cox Mill coach Craig Stewart said. “They’re so big that it’s hard to move them at all. When you do manage to move them a little bit, they’re good tacklers. They’re athletic and they run well. If you do happen to get through that first wave, the second wave is coming at you awfully fast.”

McCombs is a terrific athlete. He played previously at North Rowan and West Forsyth, before returning to Rowan County for his senior seasons of football and basketball.

“It’s been good to be back with my brothers in Rowan County,” McCombs said. “We play hard, we’re together and we push each other. This is a defense that works hand in hand. We do a good job of keeping blockers off our linebackers. At the same time, if we miss a tackle, we know the linebackers are going to be there to clean it up. We have each other’s back.”

West’s winning streak started at Concord on Oct. 4. The Spiders aren’t having a good year, but West held them to 17 rushing yards on 24 attempts. That was eye-catching.

Next was East Rowan. The Mustangs average more than 200 yards rushing — Sammy Pinckney has over 1,600 rushing yards — but the Falcons held East to 90 rushing yards on 30 tries.

“As an overall defense, South Iredell probably was our best game,” said Biggers, who had a fumble recovery, an athletic interception and several tackles for loss against the Vikings. “We shut down the run and made them pass.”

North Iredell is struggling, so that was a terrible mismatch upfront. North Iredell rushed for minus-37 yards against West. It would’ve been easy to let up or go through the motions on the road against an overmatched opponent, but West took care of business with a solid effort.

“One of the good things about this team is our guys aren’t just big, they’re going to play hard all the time,” Nixon said. “That’s been our emphasis all year long. Tough practices have been a big part of that. You want practices to be harder than the games.”

West went to Carson last Friday, played in muddy conditions and won 26-7. The Cougars scored through the air in the final minute to deny West its third shutout, but the Falcons have allowed just 20 total points in their four NPC contests.

“The defensive game plan for Carson — keep them in the box and force them to throw,” McCombs said. “It was muddy, but we kept playing very hard. We did what we were supposed to do.”

Carson runs the ball well, with determined linemen and a back, Hunter Courtney, who has quickness and toughness. Carson ran it 35 times, but only netted 71 yards, basically 2 yards per snap. Carson threw the ball 21 times, at least twice the amount the Cougars like to throw it, so West executed its game plan.

“We bring out the best in each other by pushing each other so hard in practice,” Biggers said. “And that’s not just during the season, it’s in the off-season.”

West’s offense also assists its defense by being ball-control oriented. The Falcons don’t mind running the football 50 times, and sometimes they can keep a dangerous opposing offense off the field for long stretches. West would like to keep Statesville back Caylon Imes off the field as much as possible. Imes ran for 300-plus yards against Carson and East Rowan.

The Falcons are 8-point underdogs, but they’ll take those odds. Playing at home in front of what should be the biggest crowd in a while, they’ve got a fighting chance.

Now the Falcons have their shot in a marquee game.

“It’s not like we just started getting ready for Statesville this week,” McCombs said. “This is a game we’ve been talking about since summer conditioning. This is a game that pushed us to get better.”