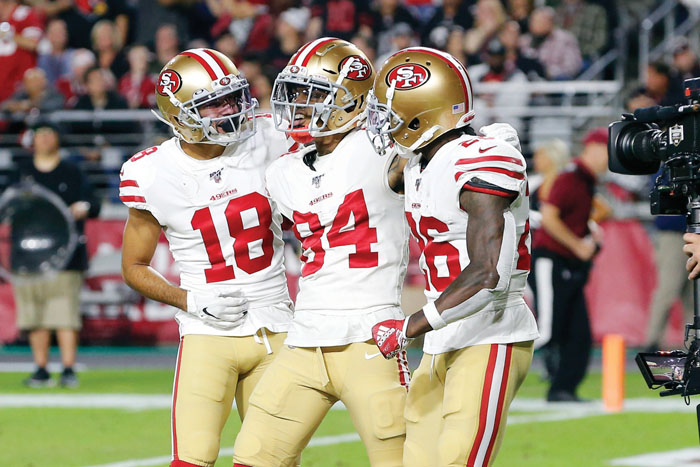 Being the NFL’s last undefeated team is never easy, and the San Francisco 49ers have bumped aside the New England Patriots in another category as well.

The 49ers are the first team besides the defending Super Bowl champs to sit atop the AP Pro32 poll this season.

“Jimmy Garoppolo is seeing the field better than ever, as his near perfect performance against the Cardinals suggests,” Newsday’s Bob Glauber said. “He’s the biggest single reason the 49ers remain the NFL’s only unbeaten team.”

The Saints stayed at No. 2 and attracted plenty of voters even during their bye week. Why? Drew Brees proved before the bye that he was back and healthy for New Orleans. And that’s not all that’s going on with the Saints.

“The biggest story in the Big Easy is a swarming defense that has allowed only two TDs in the past three weeks,” said Ira Kaufman of Fox 13 in Tampa, Florida.

New England tumbled from first to third after being beaten 37-20 by the Ravens, a loss that nearly allowed Baltimore to pass the Patriots in these rankings. New England finished with 356 points, just ahead of the Ravens (354), who ended the Patriots’ undefeated start on Lamar Jackson’s performance that put him into the MVP conversation.

“Any hopes for another 16-0 regular season were shattered in Baltimore as the Ravens took control from the start and exposed a lack of team speed that had been camouflaged through eight games,” Kaufman said.

John Czarnecki of Fox Sports said Baltimore “ran right over the defending champs” while the Patriots’ “offensive line headaches were exposed by the Ravens.”

The Seattle Seahawks are the next threat to the 49ers, with a visit to San Francisco on Monday night, and they come in at No. 5, up two spots.

“If the season ended today, Russell Wilson is your MVP,” Glauber said. “With 22 touchdown passes and just one interception, he’s having the greatest season of an already great career.”

Kansas City also moved up a couple spots to No. 6 after Matt Moore led the Chiefs to a 26-23 victory over the Vikings, dropping Minnesota three spots to No. 8. Now the Chiefs may have the reigning NFL MVP back for a road trip to Tennessee.

“The Chiefs flexed some surprising defensive muscle against Minnesota in ending an Arrowhead slide, setting the stage for a potential Patrick Mahomes return in Nashville,” Kaufman said.

The road trip to Los Angeles dropped the Green Bay Packers three spots to No. 7. The Houston Texans can enjoy their bye after climbing a spot to No. 9, while the Dallas Cowboys’ road win over the Giants bumped them up two spots to No. 10.