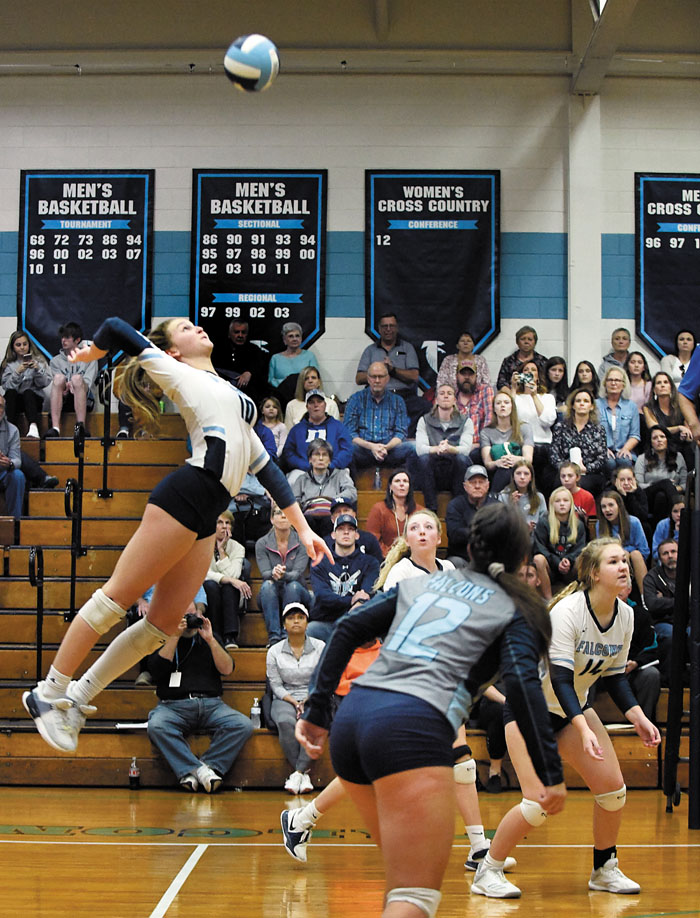 Wayne Hinshaw / for the Salisbury Post West’s Tori Hester soars in the air to return the ball against Watauga on Saturday. West Rowan will take on West Henderson tonight at 6 p.m. for the regional final volleyball game at West Rowan.

So there will be some home-court advantage for West Rowan, not just in terms of having the support of the majority of the fans surrounding the court, but in terms of freshness of legs.

West made good use of its home-court edge for its 4 p.m. regional semifinal game on Saturday, meeting around noon, setting up the gym and the concession stand, watching a chills-producing motivational video, braiding each other’s hair, warming up, and then winning in four sets against a powerful, fourth-seeded Watauga team that had to make a long journey from Boone.

West (28-0) earned home-court advantage by putting together a regular season that, except for the injury to setter Allison Ennis in early October, was perfect. The North Piedmont Conference is a small, but strong, volleyball league. Carson, North Iredell and South Iredell annually have excellent programs. West went 10-0 in the NPC and added a challenging non-conference schedule. All that work led to a No. 1 seed, based on MaxPreps rankings.

West Henderson is the No. 2 seed.

Volleyball success isn’t completely unheard of at West Rowan, but coach Jan Dowling and the Falcons are doing things the program has never done. West Rowan had never reached the fourth round before, but now it’s in the regional final. West was 6-10 all-time in the state volleyball playoffs prior to this season. Now the Falcons are 10-10.

Kelan Rogers’ program at Carson raised the bar higher for Rowan County volleyball, winning back-to-back regional championships and finishing as 3A state runner-up to Cardinal Gibbons in 2012 and 2013. West Rowan improved enough to challenge Carson in 2017, caught up in 2018, and beat the Cougars three times this season. Whether West can remain at a level this high after Tori Hester graduates remains to be seen, but the Falcons still have Kaylin “KK” Dowling for one more year and they have impressive young players.

This will be the first regional final hosted by a Rowan school. Carson had to go on the road to win regional finals at Enka in 2012 and at St. Stephens in 2013.

West Henderson comes from an area that is volleyball-crazy. Hendersonville High, which is as close to West Henderson as Carson is to South Rowan, has won 10 state titles in volleyball. That’s more than anyone.

Jan Stanley coached West Henderson from 1974 to 2009 and her teams won 698 times, making her one of the winningest coaches in state history. Her daughter, Tiffany Lowrance, followed her as head coach and is still at the helm a decade later. Now that’s tradition.

West Henderson has a record of 26-6, but West Rowan fans shouldn’t be overly encouraged by the six losses. Four came way back in August when West Henderson was playing in elite tournaments. The other two setbacks came in September road matches against Western Mountain Athletic Conference rivals A.C. Reynolds and T.C. Roberson. West Rowan had major tussles with A.C. Reynolds (second round) and T.C. Roberson (third round) last week.

West Henderson will come to Mount Ulla with a 16-match winning streak.

That streak includes a second-round playoff win against Carson. Carson played very competitively against West Henderson, losing 25-18, 25-20 and 25-23. Carson led the third set, 18-10, but couldn’t finish it off. West Henderson eliminated another NPC team, South Iredell, in the third round, although that wasn’t easy, either. The Vikings won the second set and almost had the third one, before losing it, 31-29. On Saturday, while West Rowan was holding off Watauga, West Henderson was playing at home and beating No. 3 seed Marvin Ridge in five sets.

Marvin Ridge was the defending 3A state champ. In 2018, Marvin Ridge beat West Rowan in the third round, Watauga in the fourth round, and West Henderson in the regional final.

West Henderson is powerful in the middle and gets kills from Jackson (237), Anderson (175) and O’Kelly (107). Jackson, a track and field standout, leads the team with 37 solo blocks and 67 block assists. Jackson and Anderson are juniors. O’Kelly is a sophomore.

Morgan, who is committed to Limestone, has 225 kills, while Kordonowy has 217. Both are seniors.

The 5-10 Hester, who will sign with Troy next week, should be an All-State player. She is tops on the team with extraordinary totals of 517 kills and 411 digs.

Dowling, a 5-9 junior, has 354 kills and 280 digs. Like Hester, she’s an outside hitter who does everything well. They never leave the court.

The other West Rowan players who are frequently involved in blocks are Hester (57) and Dowling (43).

Kennerly leads West Rowan in receiving serves, with Hester and Dowling next.

Sophomore setter Noe Gaeta (5-8) has averaged 11.7 assists per set since being called up from the jayvees after the injury to Allison Ennis. She’s held her own in pressure-packed, high-level matches. She had 66 assists in the five-set struggle with A.C. Reynolds in the second round. She also usually contributes double-digit digs and is tall enough to help on a double block.

The No. 1 and No. 2 seeds also are playing tonight for the regional championship of the East, with Chapel Hill at home against Greenville’s D.H. Conley, the program that lost to Marvin Ridge in last year’s state championship game.

The regional champs will meet at noon on Saturday for the 3A title. That match will be played in Capel Arena on the campus of Fayetteville State University.