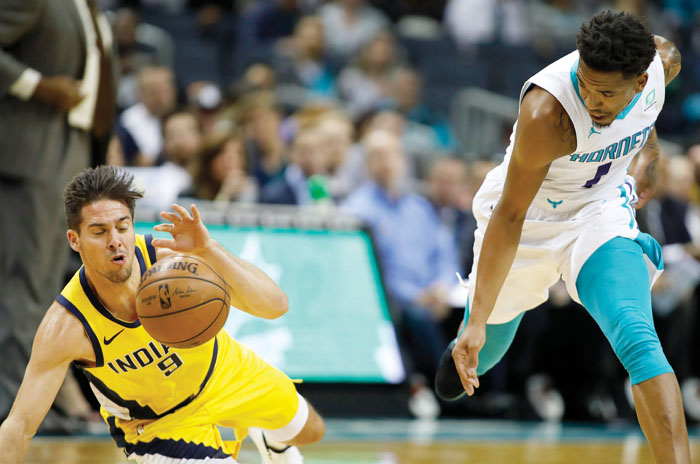 CHARLOTTE (AP) — Devonte Graham scored a career-high 35 points, Bismack Biyombo provided a huge spark off the bench late and the Charlotte Hornets battled back from a 14-point, fourth-quarter deficit to beat the Indiana Pacers 122-120 in overtime Tuesday night.

Graham sank 2 of 3 free-throw attempts with 1.7 seconds left in overtime after drawing a foul on JaKarr Sampson, helping the Hornets win their third straight game.

Graham, Biyombo and Rozier combined to score 40 of the team’s last 42 points.

T.J. Warren scored 33 points on 15-of-18 shooting and Malcolm Brogdon added 31 points for the Pacers (3-4), who had their three-game winning streak snapped.

The Hornets trailed 92-78 to start the fourth quarter when coach James Borrego made an unexpected move by turning to Biyombo, who hadn’t played at all in the first three quarters.

The reserve center provided an instant spark, scoring down low to start the fourth quarter before coming up with a block against T.J. McConnell, leading to a three-point play by Rozier on a fast break. Biyombo also stole the ball at midcourt and went in for a one-handed dunk. He added several putbacks along the way, giving the Hornets a presence they badly needed on the glass.

Pacers: Jeremy Lamb had 18 points in his return to Charlotte. … Goga Bitadze and TJ Leaf both fouled out. … Myles Turner (sprained ankle) and Domantas Sabonis (strained calf) continued to be held out while rehabbing injuries.

Hornets: Rookie P.J. Washington showed more impressive poise while scoring 16 points, including a driving left-handed dunk over Sampson that brought the crowd to its feet.

Hornets: Kemba Walker makes his return to Charlotte as a member of the Celtics on Thursday night. Walker is the Hornets’ all-time leading scorer.

CLEVELAND (AP) — Gordon Hayward tied a career high with 39 points, making all 16 of his 2-point attempts, and the Boston Celtics won their fifth straight game by holding off the Cleveland Cavaliers 119-113 on Tuesday night.

Hayward put in Kemba Walker’s miss with 22 seconds left to give Boston a 118-113 lead. Walker stole the inbounds pass and hit a free throw to put the game away.

Hayward made 17 of 20 shots, including a 3-pointer. The 6-foot-7 forward scored 16 points in the opening quarter and 22 in the first half, hitting all nine attempts from the field.

Walker had 25 points for Boston, which hasn’t lost since the season opener against Philadelphia.

Collin Sexton, who scored 21 points, hit a 3 with 1:33 to play that cut Boston’s lead to 116-113. The score remained that way until Hayward’s crucial basket after his offensive rebound.

Tristan Thompson had 19 points and 13 rebounds for Cleveland, which has lost three straight. Kevin Love scored 17 and Larry Nance Jr. 15.

Boston was 24 of 44 from the field in the first half, when it built an 11-point lead. Cleveland cut the margin to 50-48, but Hayward hit a basket and two free throws and Marcus Smart made a 3-pointer that put the Celtics ahead 61-52 at halftime.

Cleveland stayed with the hot-shooting Celtics until the final seconds. Love missed a 3 that would have tied the game with just under a minute to play.

Hayward suffered a horrific leg injury in Cleveland during the opening minutes of the 2017-18 season opener. He averaged 16.5 points in two games at Cleveland last season.

Celtics: C Enes Kanter (bruised left knee) missed his fifth straight game. Coach Brad Stevens said Kanter “really wants to play, but our medical staff doesn’t feel like he’s ready yet.” . F Jaylen Brown (illness) worked out in Boston and could join the team in Charlotte. He has not played since Oct. 26 at New York, sitting out three games in a row.

Cavaliers: G Matthew Dellavedova returned after missing two games because of personal reasons. … Nance played with his left thumb wrapped after injuring it Sunday. … F Alfonzo McKinnie scored his first points of the season, a 3 in the first quarter. … Cleveland Indians C Roberto Pérez, who was awarded a Gold Glove this week, got a loud ovation when he was shown on the video board.

Cavaliers: At the Washington Wizards on Friday.