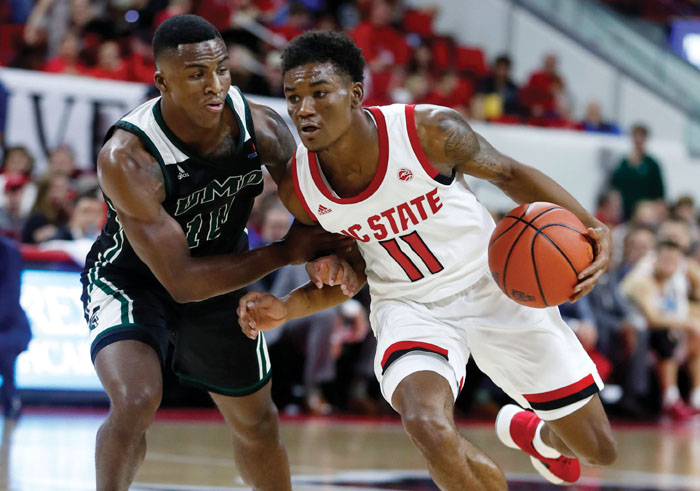 By AARON BEARD AP Basketball Writer
RALEIGH (AP) — James Banks III hit two free throws with 2.1 seconds left in overtime to help Georgia Tech beat North Carolina State 82-81 on Tuesday night in a season-opening Atlantic Coast Conference matchup.
Banks finished with 20 points and 14 rebounds, the last two coming when he calmly knocked down winning shots at the line with the rowdy home crowd roaring in a futile attempt to distract him.
The shorthanded Wolfpack had one last chance, but Braxton Beverly’s long heave from near midcourt hit only the backboard — with Georgia Tech’s Jose Alvarado immediately emphatically pumping his fist while several of his teammates began celebrating near midcourt.
It was Georgia Tech’s second dramatic win here in a year, with Banks dunking home the winning points with 1.4 seconds left in a 63-61 win in March.
This time, Georgia Tech rallied from 15 down in the first half. The Yellow Jackets shot 50%, with Michael Devoe scoring a team-high 22 points.
C.J. Bryce scored 24 points for the Wolfpack, who didn’t have top player Markell Johnson due to an ankle injury. N.C. State shot 38% for the game.
BIG PICTURE
Georgia Tech: The Yellow Jackets enter the season with returning experience and scoring punch, and it helped them hang in this one after the Wolfpack raced out to a fast start and build the double-digit lead. After repeatedly tying the game in the second half, the Yellow Jackets finally got their first lead in overtime then came up with the winning play after a wild scramble following an offensive rebound before the ball ended up in Banks’ hands in the paint.
N.C. State: Kevin Keatts was shorthanded for this one at the start of Year 3 of his coaching tenure. Johnson’s absence robbed the Wolfpack of the team’s top player capable of taking over a game as well as its floor leader. And N.C. State was already without top returning big man D.J. Funderburk, who has been suspended indefinitely by the team. Bryce carried the offensive load in the second half, including two free throws with 35.1 seconds left in OT for an 81-80 lead, but the Wolfpack couldn’t hang on.
UP NEXT
Georgia Tech: The Yellow Jackets host Elon on Monday.
N.C. State: Detroit Mercy visits the Wolfpack on Sunday.
___
For more AP college basketball: https://apnews.com/Collegebasketball and https://twitter.com/AP_Top25