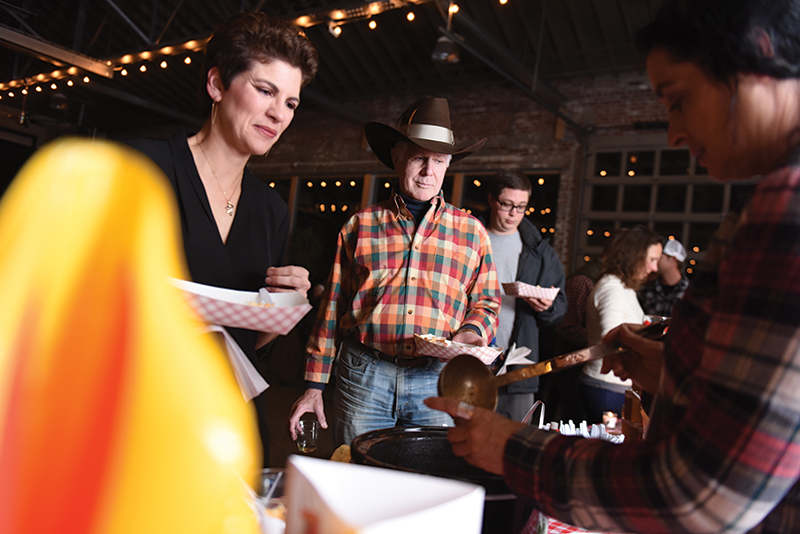 It’s the 11th year for the annual fundraiser, which supports the education and outreach programs at the museum.

“It’s great. You get to get out for a meal, taste different types of food. It’s nice, clean fun,” Bane said.

She attended the cook-off with friend Deloris High.

Bane said she prefers spicy but would make her way around to all the entries.

“I’m just glad we can go back for thirds and fourths,” Bane joked about the servings.

The museum is open free to the public six days a week. The fundraiser is one of two that allows the museum to remain admission-free.

“We want it to be accessible to everybody. Our fundraiser events are very important for us to continue offering services free of charge,” said Executive Director Anne Scott Clement.

Each person received a 2-ounce chili sample from all or some of the offerings. Choices included hot and spicy chili, meaty chili, vegetarian chili and everything in between.

“We have very generous organizations in the community who we appreciate being our community partners,” Clement said.

Chad Vriesema has attended the cook-off for about 10 years.

“I enjoy this. It’s a good community event,” Vriesema said.

Vriesema said he tries to support the fundraiser each year.

CT Hoskins attended at the invitation of a friend. Hoskins joked that he’s not one for making his own chili but prefers to grill. He does like his mother’s chili, Hoskins noted.

His preferred style is chili with meat and a little kick, he said.

Steve Shuping has attended the fundraiser every year.

“I think it is a really good thing to have,” he said.

Shuping said he likes to give back to the community.

Libby Fowler has attended for about three years with her husband.

“It’s such an important thing for the community,” Fowler said of the museum.

Fowler said she believes in what the museum does with its classes for children.

As to the types of chili she likes, Fowler said she likes them all but has a strong preference for vegetarian and spicy varieties.