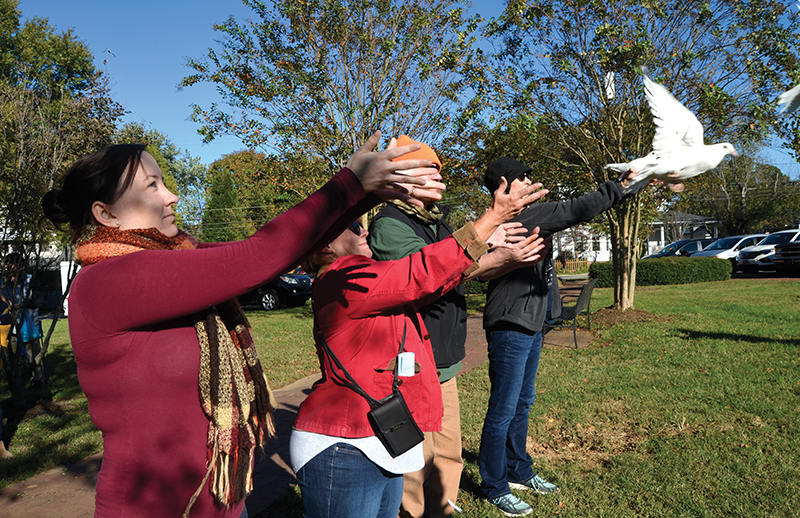 Kristin Cottingham, left, Debbie Gardner, Ian and Pamela White release doves during the Voices of Hope benefit concert, which supports the Michael Yang Foundation. The event is one that supports families grieving after having lost children. Shavonne Walker/Salisbury Post

SPENCER — Cathy and Mike McRorie were brought to tears as a picture of their daughter, Heather McRorie Roberts, was shown on a screen at Spencer’s Library Park during the Voices of Hope concert Sunday.

The concert raises money for the Circle of Hope support group for parents who have lost children. The group was begun by Steve and Lori Yang, who lost their son Michael at 23 months old on Nov. 21, 2001.

A year after Michael’s unexpected death, the couple created the Michael Yang Foundation to remember Michael and as a fundraiser for area camp and college scholarships. This year marked the 18th benefit concert for the Voices of Hope. 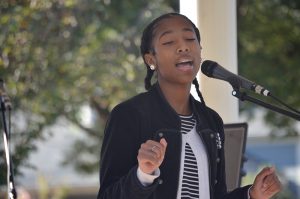 The McRories said their daughter died unexpectedly of a stroke. The 33-year-old, given the nickname Hollywood by her father, had been sick for 15 months before her death. She died on Labor Day.

The couple said they are grateful for the Circle of Hope support group as well as the benefit concert because it means they have support from people “who understand what we’re going through,” Cathy said.

Mike said there’s no way to know what they and other parents are going through unless someone’s been in the same situation. He said he is thankful for the Yangs, who are working to add weekend meetings of the support group for people who cannot attend the Thursday sessions because of work.

Kristin Cottingham lost her daughter, Carina, at 29 days old. Cottingham and three others released a dove in memory of their children. Carina died from a rare genetic condition — nonketotic hyperglycinemia, known as NKH.

“It’s an unfortunate club to be a part of,” Cottingham said, adding that it’s helpful to know there are people who understand what she’s going through.

Cottingham said she is happy that, with events like Sunday’s, her daughter’s name will not be forgotten. 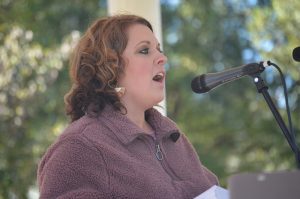 Darlene McElroy has attended the concert for several years as a tribute to her son, Clint Thompson, who died at 19. Clint was in the Air Force and had come home for two weeks on leave when he died in a car accident. He was the passenger in a car that his girlfriend was driving. She crossed the center line, ran off the road and overcorrected.

McElroy said she struggled with her son’s death but has since found support om the Circle of Hope support group, particularly from Lori Yang.

“It has saved my life. The first year, I was numb,” McElroy said.

McElroy said she still honors her son’s memory by carrying on an Air Force tradition during special family dinners. During Thanksgiving or Christmas dinners, McElroy leaves a place at the table for Clint, but she turns the plate face down as a sign of honor.

She attended Sunday’s concert with neighbor and friend Noelia Soto.

The Circle of Hope support group meets from 7 to 8:30 p.m. the second Thursday of each month at 2290 Statesville Blvd.

Four Rowan schools were on lockdown regarding off-campus activity