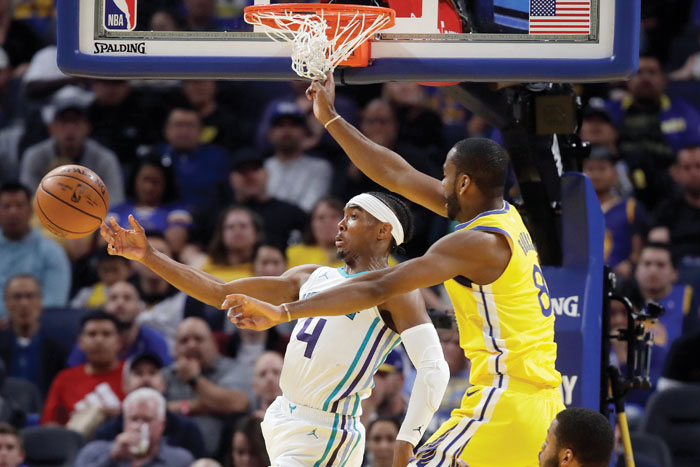 Charlotte Hornets guard Devonte' Graham (4) passes the ball as he is defended by Golden State Warriors guard Alec Burks during the second half of an NBA basketball game in San Francisco, Saturday, Nov. 2, 2019. (AP Photo/Jeff Chiu)

By MICHAEL WAGAMAN Associated Press
SAN FRANCISCO (AP) — Having lost two more starters to injury earlier in the day, Golden State coach Steve Kerr was in a remarkably pleasant mood considering his team’s fifth loss in six games to start the season.
Considering everything that’s happened so far, Kerr had good reason to smile.
The depleted and mostly inexperienced Warriors put together their best collective effort of the season and held a late lead before making a few costly errors down the stretch of a 93-87 loss to the Charlotte Hornets on Saturday night.
Baby steps, at the very least.
“Our guys played fantastic basketball and fought like crazy, and then their coach decided to screw things up at the end,” Kerr said. “We were right there. A couple things at the end if we could have executed a little bit better and if I maybe made a couple different decisions I think we would have been in good shape. Tough one but I’m really, really proud of the group.”
Kerr hasn’t had a whole lot to smile about this season, especially after his day began with news that Draymond Green will miss at least a few games with a torn ligament in his left index finger. D’Angelo Russell was also missing from Saturday’s game due to an ankle injury.
That left the Warriors looking more like a G League team than one that had won three titles in four years from 2015-18.
Golden State was so short-handed that Kerr jokingly asked a reporter before the game about his availability to play.
Turns out the Warriors, at least this version of the Warriors, did pretty well on their own for the most part.
Terry Rozier made a short go-ahead jumper then added two free throws with 4.9 seconds left after missing three straight to help Charlotte hold on.
Dwayne Bacon scored 25 points while Rozier finished with 20 points and seven assists to help the Hornets win their second straight after back-to-back losses to the Lakers and Clippers.
Rozier felt Charlotte might have overlooked Golden State because of the Warriors’ injuries.
“I feel like we didn’t come out and treat it like we were playing the Lakers or Clippers just because of everything that has happened over there,” Rozier said. “We found a way to win. It was ugly, but we were able to pull it out in the end.”
Erich Paschall had a season-high 25 points for Golden State (1-5) while starting in place of the injured Green.
“I feel like we took a good step in the right direction as a team,” Paschall said. “Even though everybody’s out, just having fun. Today we did a good job of just going out there and having fun.”
Kerr was forced to use his sixth different lineup in as many games as a result of the injuries. The new-look Warriors seemed to relish the opportunity early, scoring a season-high 30 points in the first quarter.
But Golden State went cold down the stretch, was limited to two baskets over the final three minutes and committed a critical turnover trying to inbound the ball with 25 seconds remaining.
“We were trying to get an action out of that, something to try to free up somebody, but it didn’t work out,” Kerr said.
Charlotte (3-3) trailed entering the fourth quarter but went on a quick run capped by Malik Monk’s follow shot to take an 80-75 lead.
Damion Lee’s 3-pointer with 1:55 left tied it at 86, and Paschall added a free throw that put the Warriors ahead.
But Rozier, who shot 8 of 17, made an 11-foot jumper. Rozier then missed two free throws, but Cody Martin made one and Rozier came back to make two more.
TIP-INS
Hornets: Miles Bridges had two points on 1 of 10 shooting . Charlotte was 1 of 11 on 3-pointers in the first half . Nicolas Batum sat out a fifth straight game with a fractured left finger.
Warriors: Paschall has scored 20 or more in both games he started this season … Green and Russell were both injured during Friday’s loss to San Antonio. Green will be re-evaluated Monday.
UP NEXT
Hornets: Host Indiana on Tuesday. Charlotte lost two of three to the Pacers last season, the lone win coming at Spectrum Center.
Warriors: Host Portland on Monday. The two teams split their four-game series last season, although Golden State has won nine of the previous 13 overall.
__
More AP NBA: https://apnews.com/tag/NBA and https://twitter.com/AP_Sports