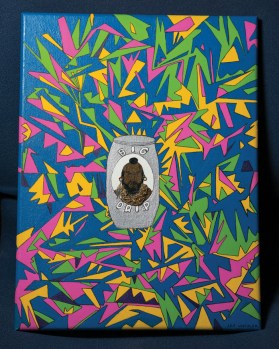 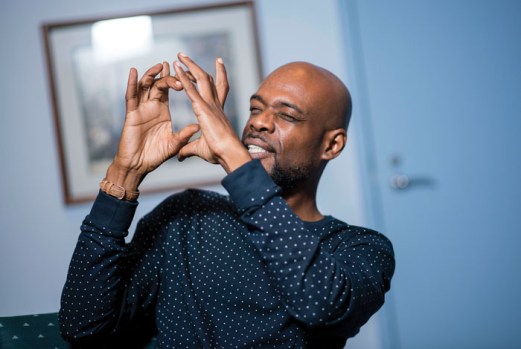 JON C. LAKEY/SALISBURY POST Artist Jae Wheeler, who works as store manager at a local drugstore, expressing his thoughts of race from his personal experiences into his painting. Salisbury,North Carolina,10/31/19. 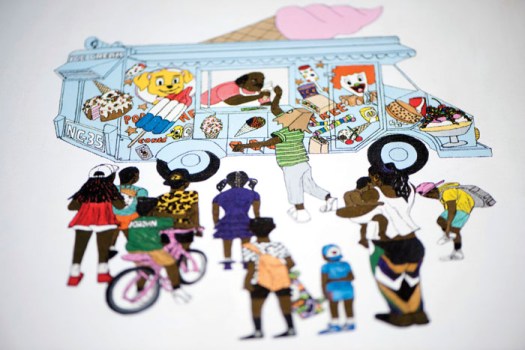 JON C. LAKEY/SALISBURY POST Artist Jae Wheeler, who works as store manager at a local drugstore, expressing his thoughts of race from his personal experiences into his painting. Wheeler points out the details in one of his paintings titled "Mr Douglas" Salisbury,North Carolina,10/31/19. 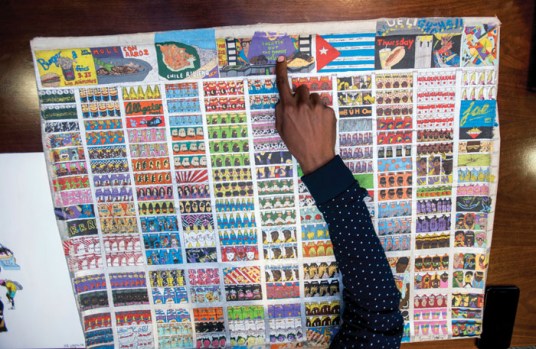 JON C. LAKEY/SALISBURY POST Artist Jae Wheeler, who works as store manager at a local drugstore, expressing his thoughts of race from his personal experiences into his painting. Wheeler points out the details in one of his paintings titled "Up Jumps Da Boogie" Salisbury,North Carolina,10/31/19.

Artist Jae Wheeler has a message for today’s youth: It’s OK to be different.

“It’s OK to be smart or to read books. It doesn’t make you any less black. You can like rock music; you can know Van Halen. You have value. Remember it and don’t waste it.”

Wheeler was born in South Carolina, spent his formative years in Salisbury and moved to Thomasville in middle school. He has four siblings and his mom was a single mom during most of his childhood.

He was bullied for being smart and reading books.

Wheeler knew he was an artist at age seven or so. He drew constantly, penciling pictures of Superman in the margins of his schoolwork. He was a big fan of cartoons; Ninja Turtles were his favorite.

Mother’s Day always brought the opportunity to make a card for his mom. He loved that. Classmates would ask him to draw pictures for them, and he was only too happy to accommodate.

Today he’s a manager at CVS and makes time for his art, but it wasn’t always so. He’s worked jobs, hard jobs, in the manufacturing sector.

Wheeler remembers hauling giant bags of tea onto conveyor belts, remembers coming home after a 12-hour day covered in tea and falling asleep exhausted, then getting up the next day to go back to work.

As a student in at NC A&T, Wheeler participated in an exchange program to Guadalajara, Mexico. It was a life-changing experience. That was in 2005-2006. He returned in 2009.

He’d never traveled before, never even been on a plane. He met people from Canada, France, Italy and Germany. He speaks fluent Spanish and thrives in Mexico. The economics in Mexico allow him to enjoy a better way of life. He says electricity costs pennies on the dollar and rent is quite affordable.

“You can use what education you have and earn a good living there,” he says. “Despite the drugs and narcos, it’s a beautiful place, very nice.”

When he’s in Mexico, he teaches English and enjoys an easy day, affording him time to work on his art after work.

He had stepped away from art for about 10 years and one day in 2014 in Mexico, a student came into class carrying a canvas. Wheeler determined then, “That’s it — When I get out of school today, I’m going downtown and get a canvas and paint. I’m going to paint!”

And he’s been painting ever since.

“I see it in my head first,” he says, “and the colors, then it’s like a flash, and I go for it. I sketch everything. As I sketch, more ideas come. The creative process, once you start doing it, more ideas flow.”

A painting of an ice cream truck in a neighborhood portrays African-American life as Wheeler sees it. The title is, “Mr. Douglas,” and it shows a large man serving ice cream to customers. The customers include a boy with a skateboard, a girl in a short dress and a boy with a paper bag over his head. Paper bag boy appears in more of Wheeler’s paintings.

He challenges social norms with the skateboard. How many black kids, he asks, have a skateboard? But it’s OK if they want to. So he included it. The children wear Adidas shoes. Again, a social norm as he sees it.

In a corner of the painting is a young mom holding a baby clad in only a diaper.

“I came from a single parent family,” he says. “I didn’t understand why things were the way they were. There were five of us, and my mom took good care of us. I know where I came from. Working hard, it hasn’t been easy. It’s so important.

“It’s intentional that there’s no man with her. That’s what she goes through. It’s important to show how things really are.”

Wheeler has a personal identity, it seems, for each character in the painting.

While this painting is about 16×20, there’s a companion piece that’s larger — much larger.

Wheeler had to build the seven-foot by seven-foot canvas from lumber and fabric. The image is similar to the smaller piece, but because of the scale, there’s much more detail. He figures he’s about 95% finished with it today.

“This took me 33 days,” Wheeler says. “No sleep. I started in the upper left corner and went across. I used a ruler and measured, drew it in then painted. The more you work, the more ideas you have.”

“I had it envisioned ahead of time. I found a different way to represent the neighborhood. I really like being original.”

And original he is. A multi-media piece portrays “Mr. T.” He’s painted in acrylic — there’s no doubt that it’s he — and pieced onto the canvas are actual gold chains.

Just when Wheeler was working on the piece, a feather randomly appeared in his home. He added it to the painting for authenticity.

“There is gross underrepresentation of African Americans in our culture,” he says. “At one time, they were going to make a $20 bill with Harriet Tubman on it. That was the inspiration of it. Maybe it’s like President Obama, it was important for African Americans to see it, especially the youth. Seeing it on the canvas, maybe it will inspire, maybe it will have a positive effect, maybe even reduce violence. I don’t remember going into galleries and seeing images of people with my skin color. I’d like to change that.”