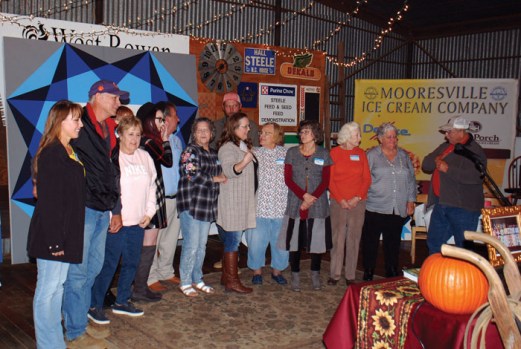 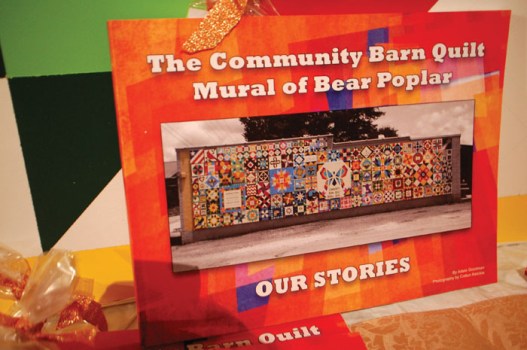 Mark Wineka/Salisbury Post A photograph of the Community Barn Quilt Mural on the side of Bear Poplar Place adorns the cover of a new book telling the personal stories behind each of the barn quilt squares. 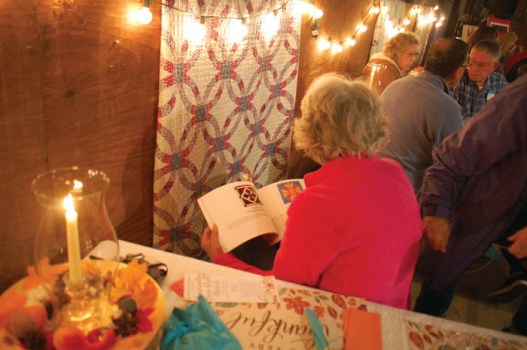 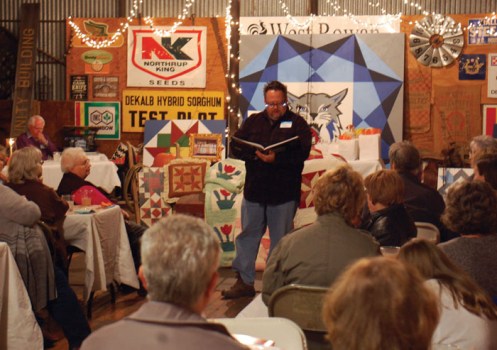 Mark Wineka/Salisbury Post One of Friday night's guest speakers, Tony Craig, reads from his own book about country stores during the night's program at Bear Poplar Place. 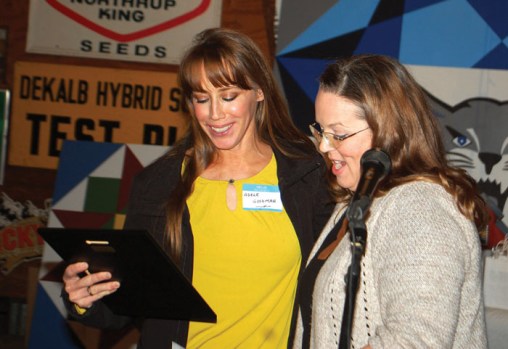 BEAR POPLAR — “M for Mother’s Love,” is the name Betty and Steve Massey gave to the quilt square in honor of Steve’s late mother, Arlene.

Over the years, Arlene had made bed quilts for her three children, nine grandchildren and five great-grandchildren. A patterned pillow she produced for Steve and Betty early in their marriage served as the inspiration for the “M for Mother’s Love” square.

“The treasured quilts she blessed us with are a vivid reminder of the love, care and devotion she had for her family,” Betty Massey said on the back of the quilt square. “In a letter she wrote to be read at her funeral, she reminded us all to ‘remember the most valuable things in life … faith, family and friends.'”

Memories and tributes such as the Masseys’ abound in a new book, which shares the personal stories behind the squares making up Bear Poplar’s Community Barn Quilt Mural.

Many of the people connected with the squares celebrated the book and the mural itself Friday evening at a private, bring-your-own-casserole banquet held where the squares were painted, the warehouse of Bear Poplar Place.

Brian Bennett said something that made people in the warehouse realize just how far this community affection for barn quilts had come in the last two years alone.

“I never thought we’d have a barn quilt banquet in Bear Poplar,” said Bennett, whose wife, Elsie, owns the store and was the chief artist behind the mural project.

On July 8 of this year, the barn quilt squares making up the 504-square-foot mural — the largest community barn quilt mural in the country – went up on the Graham Road side of the store (recently renamed from West Rowan Farm, Home & Garden).

As people from the community produced the individual squares in the months leading up to its installation, Bennett and chief Rowan County barn quilt advocate Adele Goodman made sure they recorded the stories written on the back of each square.

Among other sizes, the mural holds more than 100 1-foot-by-1-foot and 2-foot-by-2-foot squares, and it’s mostly those squares that went into the 150-page book.

The individual pages include a photograph of each and the narrative behind it.

Several of the squares’ community artists, such as the Masseys, were asked to read from the book Friday night.

Janie Lesley’s “L’s for Love” square is a tribute to her 3-year-old granddaughter Nora. The book notes that when Lesley receives a smile from Nora, she often tells her, “I like it when you smile, but I love it when I’m the reason.”

“Birds bring peace and a smile to my face,” she said. Micki painted her blue jay in memory of her late husband, Bill, who died of cancer, and her  parents, Mildred and Eddy Huffman of Granite Falls.

“This book is a blessing, and it’s part of healing,” Goodman said at one point Friday night.

“Our mother placed either the Dutch Girl or Tulip quilts on us in the winter times,” Jan wrote on her square. “They were made in the 1920s or 1930s by our grandmother and great-grandmother.”

Linda Layok and her daughter, Brandy, painted “The Boondocks Cabin,” which held real significance to them. Linda’s late father, Jerry Spurlin, loved the little cabin depicted in the square that sat beside a creek in Montgomery County.

The square also comes with a story of how Spurlin had rescued his daughter some 30 years ago from an abusive relationship and resettled her and Brandy, who was only 2 at the time, in Bear Poplar.

“If it wasn’t for him, I would have never come to know this very special place,” Layok wrote. ‘This tiny community called Bear Poplar became my safe haven. I feel very blessed to be a part of this community and all that the barn quilts represent.

“This is why I wanted to do ‘Boondocks Cabin,’ to honor my hero, my dad Jerry Spurlin, because he brought us home.”

The evening also included some presentations from illustrator/author Tony Craig, whose American Road magazine will be featuring the Community Barn Quilt Mural.

“It’s almost like a church family in here,” Craig said before reading some excerpts from his own book on country stores in North Carolina.

Cotton Ketchie, whose photographs are used in the new book and who has been among the chief documentarians of Rowan County’s barn quilts, also spoke and read from one of his books.

Ketchie said he has logged 1,500 miles on his car over the past two years in taking his photographs of barn quilts. Many of his photographs are used in the annual Rowan County Barn Quilt Calendar.

The banquet also recognized numerous volunteers behind the mural project, particularly Goodman, to whom Elsie Bennett presented a plaque honoring her work, among other things, in establishing the Rowan County Barn Quilt Trail, the calendar and now the book.

Goodman dedicated the book, “The Community Barn Quilt Mural of Bear Polar: Our Stories,” to Hilda Wood Eller, who died Aug. 30 at age 100.

“Hilda embodied the true spirit of the mural, as she painted the butterfly centerpiece with many others,” Goodman wrote in the dedication.

“Her beautiful smile, zest for life and jubilation at being able to participate in such a special project was infectious. … Hilda’s spirit, joy and cherished brushstrokes will live on forever in the mural and touch those who look at it just as she touched our hearts.”

Close to 150 people are thought to have participated in the mural, ranging in age from 4 to 100.