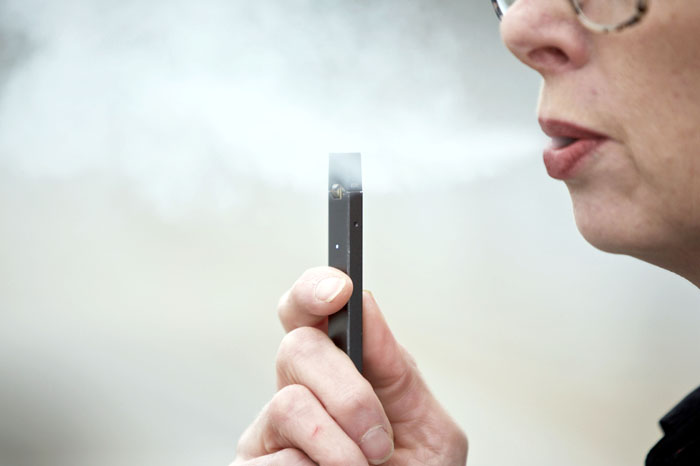 Associated Press In this April 16, 2019, file photo, a woman exhales a puff of vapor from a Juul pen in Vancouver, Wash.

SALISBURY — As questions rise across the U.S. about health effects of vaping, the Rowan County Health Department says there has been one report of vaping-related illness seen at Novant Health Rowan Medical Center.

The single case is one of 61 in North Carolina as of Oct. 22, according to the Centers for Disease Control and Prevention. Meanwhile, as of Oct. 29, there have been 1,888 confirmed and probable lung injury cases reported by 29 states associated with the use of e-cigarette or vaping products, known as EVALI. Of those 1,888 cases, 37 have resulted in deaths in 24 states.

Unfortunately without full FDA regulation, there is no way of knowing all the dangers, Smith said.

The health department has been joined in its advocacy by Youth Substance Use Prevention Rowan. YSUP Executive Director Karen Jones said the organization is focused on educating people about e-cigarettes and vaping.

E-cigarettes typically use a battery-supplied electric current that passes through a metal coil to heat nicotine-containing “e-liquids” that create an aerosol. Users inhale the aerosol as if it were cigarette smoke. Vaping is popular among teens, young adults and former smokers. The CDC says one in nine high school seniors vape on a daily basis. CDC statistics show teens vape because one in three have a friend or family member who uses them and that one in four do so because of the flavors.

And it’s something that parents should be concerned about, Jones said.

“Initially, with e-cigarettes you’ve got the vapor because it did heat water and you would inhale that,” Jones said. “Now with newer devices, it’s not water that’s being heated and often you don’t see the cloud, depending on the device.”

Some devices look like everyday items including an Apple watch, a MiO liquid flavor pod and even a No. 2 pencil.

Jones said YSUP meets regularly with community partners and school resource officers who have confiscated some of these devices. YSUP uses some of the devices to educate parents and teachers about what to look for, Jones said.

She said there are devices that look like flash drives that students can sit and puff and teachers have no idea they are smoking e-cigarettes.

“They’ve gotten easier to disguise,” Jones said. “A lot of problems we’re seeing with the vaping illness and the serious illnesses are coming from adulterated devices or kids who are using that aren’t aware of the potency that are in the devices.”

She said vaping devices sometimes have been modified to deliver THC or CBD — chemical compounds in marijuana. CBD has become a popular ingredient in health products while THC is the main psychoactive compound that provides the “high” feeling after smoking marijuana.

“Kids don’t know when to stop either. If you’re pulling cigarettes out of a pack, you have an idea of how much you have smoked, but if you’ve got a device that you’re just kind of sucking on all throughout the day, that can get away from you,” Jones said.

One JUUL pod is the equivalent of smoking 20 cigarettes or one pack of cigarettes, per the CDC.

“The implications for adolescents is their brains are still developing until they are 25. Nicotine has a very negative effect on that developing brain,” she said.

Jones said the latest trend is teens who have access to a vaping device will sell “hits” for a dollar amount to teens who don’t.

One thing to keep in mind is it’s not illegal for these kids to possess these devices under the age of 18, Jones said. She believes vaping is an issue that “we ought to be able as a community come up with alternatives to addressing those issues.”