Cal Thomas: Impeachment inquiry boils down to trick or trick 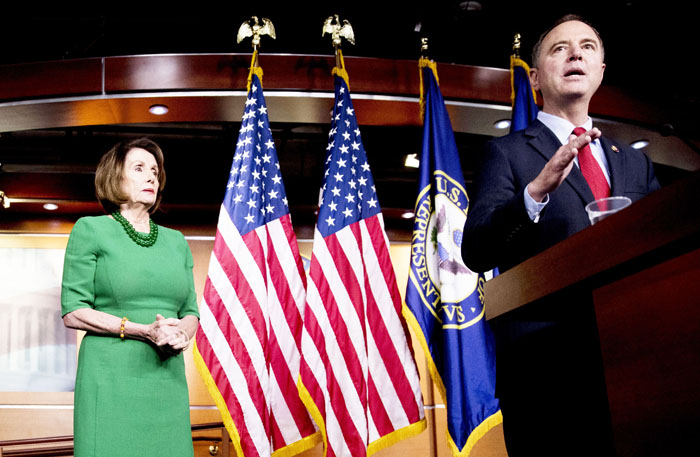 In those monster movies so popular at Halloween, it usually takes a while for the killer to be revealed. But when he is, the terror he inspired among his targets often comes to a frightening conclusion for viewers.

This analogy perfectly fits the impeachment scenario now playing out in Washington. The nation is beginning to see the ugliness of the establishment, people who believe they have a divine right (if they believed in the divine) to run the federal government. If that right is ever challenged, that’s when the long knives come out.

Secret testimonies, barring Republicans from calling their own witnesses or cross-examining the ones Democrats have subpoenaed, and now a federal judge’s ruling that secret grand jury records from Special Counsel Robert Mueller’s investigation must be turned over to House Democrats — this is how the establishment fights back.

A Wall Street Journal editorial called it “political damage control” when Democrats criticized a decision by the Justice Department to open a criminal investigation into the genesis of the Russian “collusion” with the 2016 Trump campaign. From the Journal: “Democrats know that the Hillary Clinton campaign paid Fusion GPS to dig up dirt on Mr. Trump, and Fusion hired former British spook Christopher Steele, who compiled a dossier of allegations about Mr. Trump from Russian sources that turned out to be false.

“Worse, Fusion funneled the dossier to the FBI, which used it to persuade the secret FISA court to issue a warrant to eavesdrop on Trump official Carter Page. Democrats now want to discredit any attempt to hold people accountable if crimes were committed as part of this extraordinary dirty trick.”

If the trail of the Russian collusion fraud leads back to Democrats and the Clinton campaign, it will undermine the credibility of what Democrats are trying to do with Ukraine and Trump’s phone call to its president during which he allegedly demanded Ukraine’s help digging up dirt on Joe Biden and his overpaid son, Hunter.

It is a charge the president has repeatedly denied.

U.S. Attorney John Durham is heading a criminal probe. It appears the goal of the Democrats is to advance impeachment to a vote in the House before it comes out. To hurry the process along, Speaker Nancy Pelosi shepherded a full House vote Thursday to begin the public phase of the inquiry. It included the establishment of rules and due-process rights for the president.

On his radio show, Rush Limbaugh got to the heart of the matter: “I think what Schiff and Pelosi and this entire so-called impeachment inquiry is really all about is derailing the Barr investigation. And I think that’s why they’re in such a hurry. … They’re trying to convince the American people that Trump is guilty and should not be president before Barr and Durham and (Inspector General Michael) Horowitz have time to reveal anything. And there’s one downside to what happened here. We now have an official criminal investigation. That means that Durham and Barr can impanel a grand jury. And this is why the (former FBI Director Andrew) McCabes and the (former CIA Director John) Brennans and the (former Director of National Intelligence) James Clappers are running around today in a near panic.”

The unfairness of it all is what strikes many people. Polls are fluid, some indicating a majority favor the investigation but oppose impeachment and the president’s removal from office, especially this close to the next election. Let the people decide is the mantra one hears in some voter interviews.

President Trump’s greatest weapon, other than truth, is what he has done for the economy, judges and the pro-life movement. Perhaps no Republican could have done it better. These are winning issues. The establishment knows it and that’s why this horror movie continues to play out. Call it trick or trick.