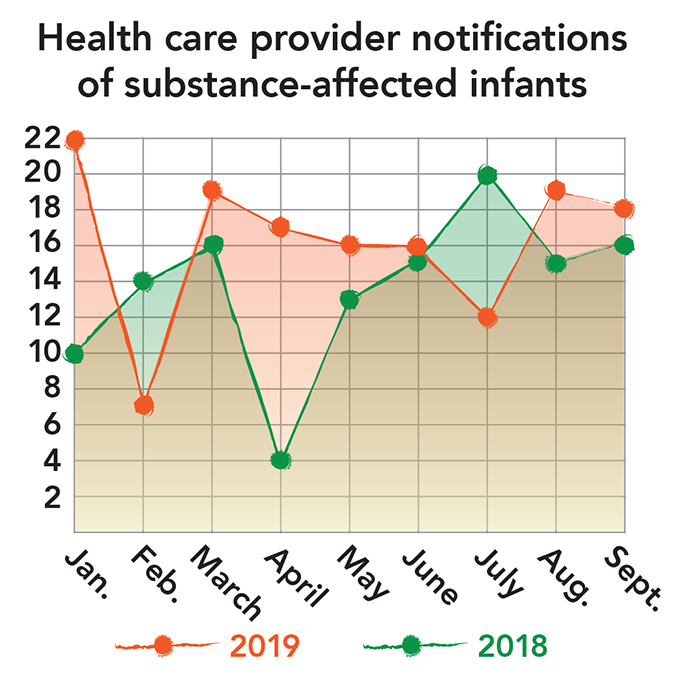 SALISBURY — Even with one month left in the year, the Rowan County Department of Social Services has seen a year-over-year increase in the number of infants affected by substance abuse.

Officially known as a substance-affected infant, the children have a positive urine, meconium or cord segment drug screen, medical evaluation or behavioral health assessment of the mother that shows an active substance use disorder during pregnancy or at birth. From January through the end of September, there were 146 total notifications from health care providers about substance-affected infants. That’s compared to 123 total notifications at the end of September 2018.

“If they have any of those positive toxins, that is reported to Child Protective Services as an infant affected by substance abuse,” said Rowan County Social Services Director Donna Fayko.

According to Dr. John Bream, medical director of the Emergency Department at Novant Health Rowan Medical Center, substance-affected infants can suffer from symptoms such as seizures, vomiting, diarrhea, sweating and irritability.

Fayko stressed that the infants are substance-affected infants, not all of them are addicted.

In 2019, January represented the highest number of substance-affected infants cases reported to Child Protective Services. And while most months this year have involved 16 or more cases of referrals, most months of 2018 saw the opposite.

“When we’re looking at neglect, it’s neglect on the parent’s part because they used substances while they were pregnant. What we have to look at when a child is born is if the mother’s drug use impacted the child at birth,” Adams said.

According to the North Carolina Department of Health and Human Services, after an infant is defined as a “substance-affected infant,” a plan is then required known as “plan of safe care.”

Adams says that in order for a plan of safe care to be developed in Rowan County, the DSS office of the county the child resides in must complete what is known as a Care Coordination for Children referral form. That’s a reference to a program at the Health Department. It’s for at-risk children from brith to 5 years who meet certain criteria. Parental substance abuse is one of them.

“Here are the services. Here is some education, and here is how we might help you. Are you interested? And the parent can say ‘yes’ or ‘no,’” Fayko said, describing the program.

The laws also require that procedures are in place to ensure the safety and well-being of substance affected infants following their release from health care providers. Rowan County DSS refers clients they feel need treatment to addiction treatment centers such as Capstone Recovery located in Salisbury.

“We are a substance abuse transitional recovery center for women and offer individual counseling with a psychologist,” Executive Director at Capstone Recovery Miriam Ramirez said. “We have seen families restored because of the treatment they have received at Capstone.”