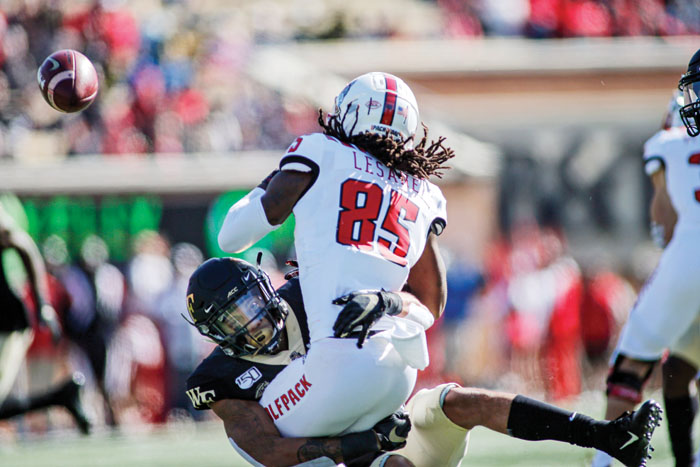 WINSTON-SALEM (AP) — The pylon was in sight for Wake Forest’s Jamie Newman as he cut through the defense on the way for a score in his return from a shoulder injury.

That’s when the quarterback extended his arms to each side, ball in his left hand, as he crossed the goal line in a fleeting celebration that marked the start of the 23rd-ranked Demon Deacons’ 44-10 victory over North Carolina State on Saturday.

Newman threw for three touchdowns and ran for two scores, showing no signs of trouble from the injury that had sidelined him for one game and part of another. His status was uncertain — at least according to Clawson’s public comments — ahead of the long-running instate series, though his performance was anything but.

Newman threw for 287 yards and ran for 30 more before checking out late in the third quarter. Clawson said he encouraged the 6-foot-4, 230-pound redshirt junior with a physical running style to slide or step out of bounds to avoid taking extra hits in his return.

Not that Newman sounded worried.

That helps explain why Newman and the Demon Deacons (7-1, 3-1 Atlantic Coast Conference) had this one wrapped up early. By the end, the school said, the 34-point margin was its largest ever against an ACC opponent at its BB&T Field home since September 1968.

Newman scored twice on first-quarter keepers, starting with the arms-extended 20-yarder. He also had the first of his three TD throws to Jack Freudenthal in the first quarter, with Wake Forest scoring touchdowns on its first three drives and taking a 24-0 lead early in the second.

N.C. State (4-4, 1-3) never had an answer, with its defense unable to stop the Demon Deacons and its offense unable to sustain drives with first-time starting quarterback Devin Leary.

“That was a bad situation for us to have to be in on defense obviously,” Wolfpack coach Dave Doeren said. “The whole first quarter didn’t go our way. We didn’t get off the field on third down. Field position was pretty critical in this football game on the road, and we didn’t have any.”

N.C. State: It was another miserable every-other-year trip west to Winston-Salem, where N.C. State has won once since 2001. It came following an open date that allowed Leary to get plenty of first-team practice reps to prepare as the Wolfpack’s third starting QB this season in an attempt to regroup for a November push. Worse, the injury-riddled Wolfpack lost starting running back Zonovan Knight in the first half; he got an X-ray for an undisclosed injury.

“We’ve just got to get better,” Doeren said. “I mean, I can’t even look at the score right now. … We’ve got 10 penalties, we’ve got three turnovers. There’s a lot to fix.”

Wake Forest: The open week bought time for Newman to get healthy for the only team still with a chance to interrupt fourth-ranked Clemson’s march to yet another ACC Atlantic Division title. The Demon Deacons were 0-7 under Clawson when emerging from an open week, but now they’ve beaten the Wolfpack for a third straight year.

The margin was impressive enough to potentially give the Demon Deacons a boost in the AP Top 25 poll, as was seeing Newman back at the helm of the offense.

COLLEGE PARK, Md. (AP) — Giles Jackson returned the opening kickoff 97 yards for a touchdown and No. 14 Michigan used two first-half scoring runs by freshman Zach Charbonnet to pull away from Maryland in a 38-7 victory Saturday.

Jackson’s game-opening dash down the right sideline set the tone. Charbonnet ended Michigan’s first drive with a 2-yard run, and the defense made those two scores stand up.

CHARLOTTE (AP) — Chris Reynolds threw for a touchdown and ran for another as Charlotte scored 34-unanswered points to beat Middle Tennessee 34-20 on Saturday.

Middle Tennessee capped its first drive with a score but McCallister’s 2-yard touchdown run quickly tied it up. Two more consecutive Charlotte touchdowns followed, on Reynolds’ 19-yard scoring run late in the first quarter and on another short TD lunge by McCallister early in the second, for a 21-7 advantage. Cruz capped the first-half scoring with a 38-yard field goal to make it 24-7 at intermission.

The Fighting Irish (6-2) committed three turnovers deep in Virginia Tech territory, including a fumble at the goal line that Divine Deablo returned 98 yards to tie it at 14 with 9 seconds left in the first half.

The Hokies (5-3) added a couple of field goals in the second half and the Irish missed one, leaving Notre Dame trailing by six with 3:19 remaining and the ball at its 13.

Fromm completed 20 of 30 passes for 279 yards and two touchdowns, including a 52-yarder to an uncovered Lawrence Cager in the fourth quarter. Fromm also threw a TD pass in the first half, his fourth on third down in two years against the Gators. Cager hadh seven receptions for 132 yards, both career highs.

D’Andre Swift added 86 yards rushing to help the Bulldogs (7-1, 4-1 Southeastern Conference) move a step closer to winning the SEC’s Eastern Division for the third consecutive year and strengthen their College Football Playoff resume. The Gators (7-2, 4-2) looked lost on both sides of the ball most of the afternoon.

Etienne, the reigning Atlantic Coast Conference player of the year, helped the Tigers (9-0) HAD scoring runs of 47 and 86 yards in the first 15:12. Clemson improved to 34-0 against FCS programs. It was the Tigers’ sixth straight win over Wofford (5-3), which fell to 1-21 against FBS schools.

SEATTLE (AP) — Tyler Huntley threw for one touchdown and ran for another, Jaylon Johnson returned an interception 39 yards for a score and Utah overcame an 11-point first-half deficit.

The Utes (8-1, 5-1 Pac-12) kept alive their College Football Playoff hopes, forcing Jacob Eason into three turnovers and getting just enough offense from Huntley to rally from an early 14-3 hole.

Carter Stanley was 13 of 23 for 115 yards and two interceptions for Kansas before leaving with an injury late in the game. Star running back Pooka Williams managed just 61 yards rushing.

The Wildcats held new coach Les Miles’ team to 241 yards of offense, a 2-for-10 mark on third down and stopped it on both fourth down tries. Kansas State also had four sacks, dominated the time of possession and had 342 yards rushing in what turned into a lopsided affair.

Harvick on pole at Texas while other Cup contenders…