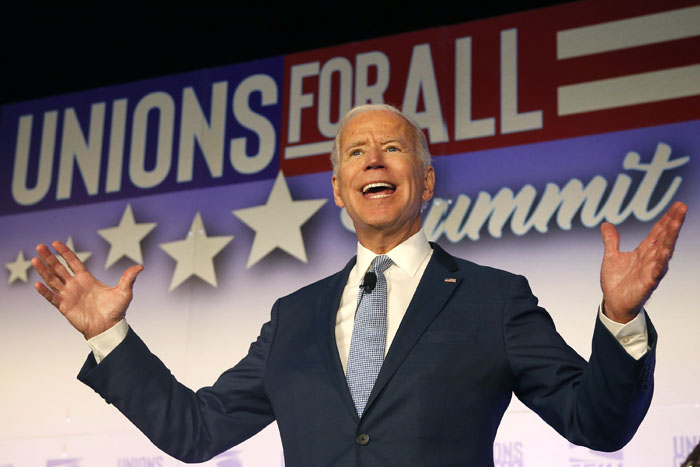 I was in the ballpark with three grandsons for Game 5 of the World Series when President Donald Trump’s presence was announced on the scoreboard. The cascade of boos was immediate, heartfelt and very loud.

Of course, Washington is a heavily Democratic city, and “abhorring President Trump is what unites D.C.,” as Washington Post columnist Petula Dvorak put it. Still, there is a political lesson here.

The passion and energy in Democratic ranks is largely negative, not positive. It is mainly generated against Trump, not in favor of a particular candidate. But the intensity gap is a special problem for Joe Biden, who holds an almost six-point lead over Sen. Elizabeth Warren in national polls averaged by RealClearPolitics.

It’s hard to imagine a Biden rally where the fervor backing the candidate matches the loathing for Trump that was so palpable in the stadium. And that’s not just a guess.

There is a primary going on right now, months before actual voters cast real ballots in Iowa, and the metric is money. Folks — Biden’s favorite term — are voting with their credit cards, and the results have been dreadful for the former vice president. In the most recent public filings, he had only $9 million on hand, far behind Sen. Bernie Sanders ($33.7 million) and Warren ($25.7 million).

Biden’s polling lead is based almost entirely on one factor: the widespread belief that he’s the best bet to beat Trump. But “electability” is not translating into cash. That’s why the Biden campaign recently reversed course and announced it would welcome help from super PACs, largely unregulated entities that can accept unlimited political donations.

It was an embarrassing confession of weakness. Only last month, Biden spokesman T.J. Ducklo denounced the “dark-money groups helping Donald Trump spread his outlandish lies and slander.” The Biden campaign, he smugly assured voters, “has not and will not welcome the help of super PACs.”

Biden’s lackluster fundraising is only part of the reason for the switch, however. The other is a critical yet underappreciated factor: Trump’s enormous head start in raising money and assembling a database that can be used in next year’s campaign.

Biden adviser Kate Bedingfield was right in saying, “Donald Trump has decided that the general election has already begun.” In fact, that campaign started the day Trump was inaugurated. The president has assembled a war chest of about $150 million, and he’s already buying countless ads on Facebook and other social-media platforms, with much of his fire aimed at Biden. Without a super PAC bolstering his defenses, the former vice president is battling missiles with muskets.

Trump’s re-election strategy is already clear. He is not trying to win over any of those fans who booed him at the ballpark. A recent Economist poll reinforced how deeply anti-Trump feeling runs, with strong majorities saying he is not “honest and trustworthy,” exercises “mostly bad judgment” and doesn’t care “about the needs and problems of people like you.”

What Trump is trying to do is identify and energize every single person who already shares his world view and make sure they all vote. And that’s where his financial advantage could be decisive.

Trump campaign manager Brad Parscale told “60 Minutes” that Facebook was the key to Trump’s victory in 2016 and will be again, because it is the best platform for reaching all those potential Trump voters through a torrent of highly targeted ads.

With virtually unlimited funds, Team Trump can run thousands of ads every day, testing them constantly for effectiveness with different words, colors, pictures and messages. “What can make people react?” asked Parscale. “What catches their attention? Remember, there’s so much noise on your phone … or on your laptop. What is it that makes it go ‘poof’?”

Once their phone or laptop goes “poof,” once they react to the message and connect to the campaign, those voters are entered into Trump’s database and constantly courted and coddled until Election Day. The president won almost 63 million votes in 2016, and Parscale estimates he could have as many as 50 million committed supporters in his database next November, with email addresses and phone numbers attached, ready to be activated.

The reaction to Trump at the World Series was undoubtedly real. But that’s not the whole story. Team Trump has the money and experience to maximize the turnout of his supporters, the ones who weren’t booing. And that’s why Biden is encouraging super PACs to help him. He has no choice, if he wants to win.

Letter: Heggins works for betterment of all